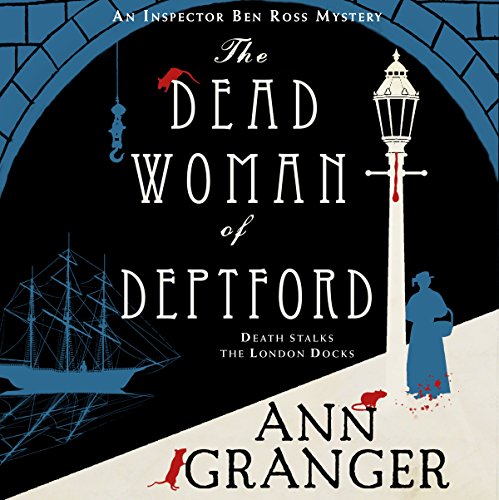 The Dead Woman of Deptford

On a cold November night in a Deptford yard, dock worker Harry Parker stumbles upon the body of a dead woman. Inspector Ben Ross is summoned from Scotland Yard to this insalubrious part of town, but no witness to the murder of this well-dressed middle-aged woman can be found. Even Jeb Fisher, the local rag-and-bone man, swears he's seen nothing.

Meanwhile Ben's wife, Lizzie, is trying to suppress a scandal: family friend Edgar Wellings has a gambling addiction and no means of repaying his debts. Reluctantly Lizzie agrees to visit his debt collector's house in Deptford, but when she arrives she finds her husband is investigating the murder of the woman in question.

Edgar was the last man to see Mrs Clifford alive, and he has good reason to want her dead, but Ben and Lizzie both know that a case like this is rarely as simple as it appears....

I can see this took a different production with the introduction music which added to the Victorian mystery atmosphere. I was disappointed with the new narrators though. Gareth Armstrong did a good job, though I still prefer that of Laurence Kennedy. Julia Barrie had a lovely voice with clear diction. However, I find her unable to bring out the full character of head strong Elizabeth. Her portrayal of Bessie the maid was rather awful, and that of Patience Wellings plain annoying and whinny.
It took me awhile to enjoy the book because of the unsuitable narration.

WHAT THE----EVERY-OTHER CHAPTER A GOOD DETECTIVE MYSTERY. BUT WHAT THE HECK IS WITH INSPECTOR ROSS,S WIFE TELLING A COMPLETELY DIFF. STORY ABOUT THE HOME LIFE AND FRIENDS AND PROBLEMS WITH FRIENDS.

After listening to 4 books read by Laurence Kennedy and Maggie Marsh, it just wasn't the same. Love the story, you just should not have changed the speakers....
Could not finish