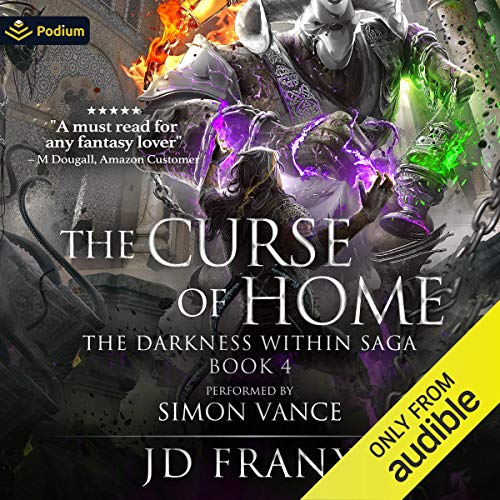 The Curse of Home

Separated from Ember and Max, Kael Symes turns to an old friend to help hide the afterlife tokens in Talohna’s most terrifying locales.

After nearly two years and with one token left to hide, a powerful magical event hits Talohna and causes the failure of the most important spell Kael has ever cast. The horrific results leave him a wanted man and all of his efforts to form an alliance against the Ri’Tek fall apart.

With the tokens hidden at last, Kael wants nothing more than to forget the past and to spend time with his family, but knowing they will never be safe no matter where they hide, he recruits Treach in a bid to scour the Arcane Library catacombs for an answer. When the fallen god discovers the location of a legendary fortress thought to exist only in myth, Kael and his allies set out to find the hidden keep in the hopes of making it a home for the children born under the rays of the Black Sun.

Unfortunately for Kael and everyone he cares about, myths in Talohna are often grounded in reality and when they stumble into the cursed grounds of Solikyr Fortress, Kael prays that the last five years have hardened him enough to protect his loved ones from the gauntlet of horrors that have infected the fortress and its massive castle. Kael and his companions press further into the fortress and deeper into the curse, only to discover one of Talohna’s oldest and most dangerous secrets.

One that will leave its mark on them all.

Lots of action, not a lot of story. Overall it's just boring. The last three were kind of soso in my opinion too, but I was interested enough to see what comes next. The answer is very very little. For an entire novel they managed to progress the story only a tiny bit. Feels like the author is just milking the series for all it's worth. This is where I leave off, I'll be returning this. I could have gotten all the important information in this book in a half page summary, which should tell you something about the way the author fills a book

Best book in the series so far!

This book was action packed and finally started to bring everything together. I can't wait to see where the next book takes things. I highly recommend this series to any fantasy fan.

As usual, Simon Vance did a great job narrating and he has become one of my top 3 narrators joining Tim Gerad Reynolds and Nick Podehl.

Too heavy on exposition

The prose and narration were written and performed well but the author spent too much of his work visiting too many areas and spending an inordinate amount of time discussing their mission and known facts repeatedly. This made sticking with the novel somewhat tedious. The book would have benefited greatly with a more laconic editor stripping it to half its length. Also, the number of serious, near death encounters Kael seems to miraculously heal from from one moment to another bordered on the ridiculous.

Story continues to get better every page every boo

characters continue to be great and show more detail even 4 books deep. love the story, it never gets boring or reputatisous in situations and details to the situation and their results. can't talk enough about this journey as a whole. Getting the next book of this series NOW.

Such a great series, one of my favorites. What a great book. Cant wait for the next one!!

This is a great continuation of the series. I am really looking forward to Book 5.

leaves you wanting more. can't wait for new book in. loved the book when is the next book coming.

love this book along with the rest of the saga

Someone needs to get a wiki going. I had to re-listen to book 3 before this one because of how much I forgot. A good wiki would have jogged my memory enough to follow along. I started making notes, so when book 5 comes out, I'll be ready.

As always Vance is an excellent narrator.
Each book gets a little more convoluted but still a grand adventure.

However, had I not read Northmen first this book wouldnt have tied together coherently enough for me. If I were the powers that be, I would have made the main books longer and tied that and any other side story into the main line.