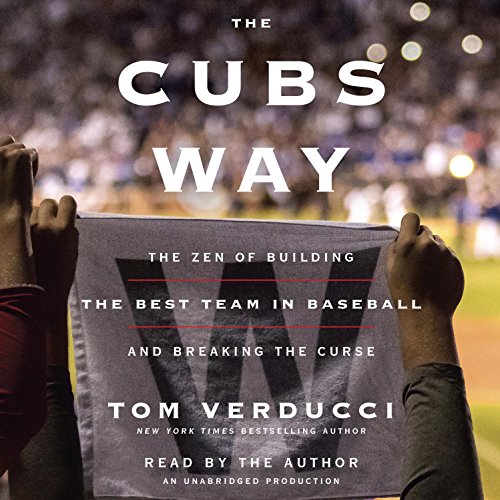 It took 108 years, but it really happened. The Chicago Cubs are once again World Series champions.

How did a team composed of unknown young players and supposedly washed-up veterans come together to break the Curse of the Billy Goat? Tom Verducci, twice named National Sportswriter of the Year and cowriter of The Yankee Years with Joe Torre, will have full access to team president Theo Epstein, manager Joe Maddon, and the players to tell the story of the Cubs' transformation from perennial underachievers to the best team in baseball.

Beginning with Epstein's first year with the team in 2011, Verducci will show how Epstein went beyond "Moneyball" thinking to turn around the franchise. Leading the organization with a manual called "The Cubs Way", he focused on the mental side of the game as much as the physical, emphasizing chemistry as well as statistics.

To accomplish his goal, Epstein needed manager Joe Maddon, an eccentric innovator, as his counterweight on the Cubs' bench. A man who encourages themed road trips and late-arrival game days to loosen up his team, Maddon mixed New Age thinking with Old School leadership to help his players find their edge.

The Cubs Way takes listeners behind the scenes, chronicling how key players like Rizzo, Russell, Lester, and Arrieta were deftly brought into the organization by Epstein and coached by Maddon to outperform expectations. Together, Epstein and Maddon proved that clubhouse culture is as important as on-base percentage and that intangible components like personality, vibe, and positive energy are necessary for a team to perform to their fullest potential.

Verducci chronicles the playoff run that culminated in an instant classic Game Seven. He takes a broader look at the history of baseball in Chicago and the almost supernatural element to the team's repeated loses that kept fans suffering but also served to strengthen their loyalty.

The Cubs Way is a celebration of an iconic team and its journey to a World Championship that fans and listeners will cherish for years to come.

People that need to read this book are as follows:


I can’t say enough good things about this book. I absolutely love it.

If you could sum up The Cubs Way in three words, what would they be?

What other book might you compare The Cubs Way to and why?

Sounds just like he does on TV - not a homer, but as a no-nonsense reporter

Nearly everyone, including non-baseball fans, is aware of the story of the Chicago Cubs during the 2016 season. Having not won the World Series since 1908, the team was led by a core of young position players and not only compiled the best record in baseball, they broke the so-called “curse” and defeated the Cleveland Indians in a thrilling 7-game World Series. The story of how this championship team was built is told in this outstanding book by Sports Illustrated writer Tom Verducci. He also narrated the audiobook, which was also done well. Authors who narrate the audio version of their books help to lend an air of authority to the work.

The story of the team is told mostly through extensive interviews with Cubs president Theo Epstein and field manager Joe Maddon. Both of them have ideas and viewpoints that go against the traditional way of building and managing a winning team, something that is noteworthy in the usually conservative business of baseball. For example, many teams try to build their teams through pitching as there are plenty of clichés and conventional thoughts that state pitching is more important.

However, Epstein didn’t follow that model. Instead, he concentrated on obtaining a core of talented position players who would live up to his standards for talent, character and leadership. Between trades and the draft, Epstein found his core players. First baseman Anthony Rizzo (trade), third baseman Kris Bryant (draft), catcher/outfielder Kyle Schwarber (draft) and shortstop Addison Russell (trade) make up that core and Verducci tells the reader why each of these players are so important to the team. Oh, and as for pitchers – through some shrewd trades and free agent signings of veterans like Jon Lester and Jake Arrietta, that was addressed as well.

The best and most extensive writing, however, is saved for the lengthy passages about Maddon and his unorthodox approach to running his team. Having already achieved success with the Tampa Bay Rays, Maddon’s complete story with the Cubs is captured with humor, detail and inside information that he was more than happy to share with Verducci. The reader will feel like he or she is part of the Cubs clubhouse – which is one of those important details that helped change the culture of the team after it underwent a multi-million dollar upgrade.

If Cubs fans read only one book about their team’s magical 2016 season, this is the one they must read. Even readers like me who are not Cubs fans but want to read about an excellent baseball team, this book should be added to their libraries. Verducci can certainly fly the “W” with this winner of a book.

Classic Book About the Youngest Legendary Team Ever

This is an amazing book about the greatest story in the history of sports: the green Chicago Cubs winning the World Series after a century+ drought. Wonderful writing about baseball, character, creativity, life, and resilience. This book puts words to a defining moment for Chicago , Cub fans, and all sports lovers.

When winning the World Series is a more than just destiny. Money, analytics, innovation, character -- and characters.

The book relives the Cubs 2016 season with incredible insight into every player’s, coach’s, and executive’s journey to Game 7 of the World Series. More importantly, it delivers a powerful message about leadership and the importance of people. Sits nicely alongside Astroball.

Verducci does a serviceable job as the narrator of his own book. He isn’t a polished audiobook reader, but he gives the yeoman’s effort and the book’s story pushes everything to five stars.

Like the season it immortalizes, this work is a masterpiece. Like the 2016 Cubs, it goes wire to wire with joy, skill and smarts. This is a national treasure.

I'm a sports fan and youth baseball coach, but I don't know nearly enough about baseball. This book was excellent as the story of the 2016 Cubs, and I also picked up a few nuggets to bring back to the team. I need to read more baseball books. And as a Red Sox fan this is also good for the continued story of Wunderkind Theo.

Better than play by play

An excellent analysis of every aspect paced out over the unfolding meta narrative of the series itself. This book provides insight and drama in the best of ways. Kipnis and Bartman? I love the romance of Baseball.

The author presents the hapless but never bitter Chicago Cubs, who endure for over 100 years without a world championship. Through executive genius and bold leadership at every level of the game, the 2016 Chicago Cubs captured America's heart playing at the apex of major league baseball in a place called Wrigley-ville.

I am a Tom Verducci fan, and his book did not disappoint. Baseball is such a great game, a true team sport. I really enjoyed learning about GM Theo Epstein and manager Joe Madden, and how they put together and managed this championship team