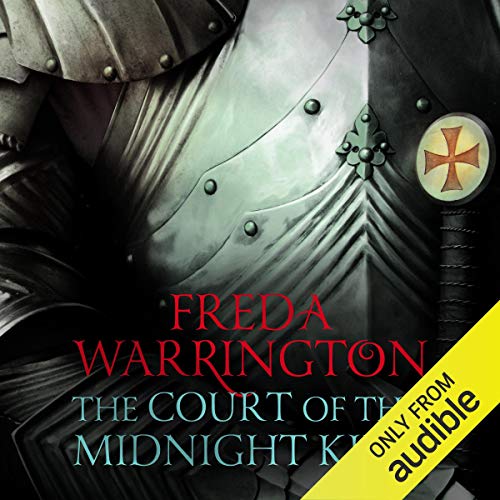 The Court of the Midnight King

The Wars of the Roses - a colourful age, full of fury and passion. Richard III - a shadowy, charismatic figure, portrayed by Shakespeare and by history as England's most malign, ruthless, and infamous king...hacked to death on Bosworth Field in a just ending, unmourned. But history is written by the victors. Other realities reveal a different Richard; one who was loved and remembered in the North as their best ruler; a man who, good or evil, can never be forgotten.

To Lady Katherine, he is a dark angel; to his faithful knight Raphael, a creature of light; to others, a complex and seductive mystery. Through their eyes we see Richard grow in a strange world - like ours yet unlike, where a Mother Goddess is still revered alongside a patriarchal God. As the struggle between old and new religions is mirrored in that between York and Lancaster, a chance meeting binds Katherine and Richard reluctantly together, and Raphael becomes haunted by nightmare visions of the future.

From their youth, the novel traces their story along with that of England during one of the most fascinating times of our history.

In the bestselling tradition of The Mists of Avalon and Lady of Hay, The Court of the Midnight King mixes history with the fantastical to create a wonderful, epic tapestry of love, war, and treachery.

"Superb fusion of fantasy and historical romance. Freda Warrington has always written lyrical, intensely imagined books across the fantasy spectrum, from vampires to epic trilogies, but in this book she brings along her private passion for the historical figure of Richard III and the combination of dazzling alternative history and smouldering romance is thoroughly enjoyable from first page to last… A pleasure to read." (Justina Robson, author of Keeping It Real)
"Warrington’s prose is literary velvet, luxuriating in colour and texture… Idealised but well realised, The Court of the Midnight King is seductive, sensuous and rich. A bit like Richard himself." (Infinity Plus)
"Beautifully written and heartily recommended." (Medieval Mysteries)
"Lush and beautiful historical fantasy. One of my very favourite historical fantasy novels, this is a lushly written alternate version of Richard III’s history, with magic and romance and a rich sense of period. Gorgeously written, a wonderful book to sink into." (Stephanie Burgis, author of A Reckless Magick)
"[A] fascinating book. You’re not sure if this other version of our world is merely a dark mirror – a slightly different version of our past where the history runs the same, only colored by the supernatural – or if it is an entirely different place. This removes the inevitability inherent in this type of tale, for even though we have no real hope that Richard will survive, there is a tiny, tiny glimmer. That makes this even more of a strong moving story… The imagery in the story, the exploration of a fascinating time in English history and the strong characterization of both fictional and non-fictional characters make this an engaging read, one that despite its fictional aspect makes you wonder what the real truth is about Richard the III, and makes you look at accepted history with new eyes." (SF Site.com)