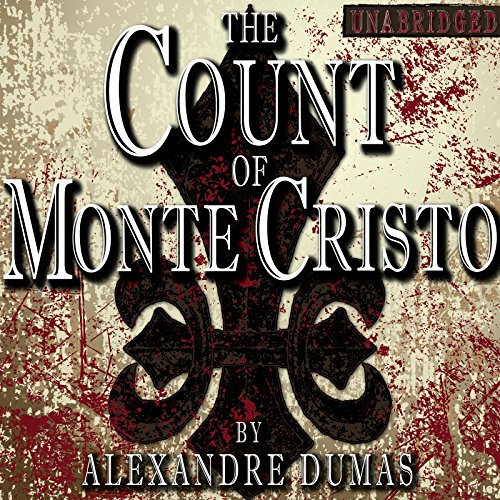 Trust. Betrayal. Revenge. The Count of Monte Cristo is the quintessential masterpiece of Alexandre Dumas. In Edmond Dantes we find an early materialization of the modern superhero. He is a dashing young sailor imprisoned unjustly for treason. While in prison he meets a holy man who imparts to him all his wisdom of languages, philosophy, science, and literature. The "abbe" also divulges the profound secret of a hidden treasure. Dantes realizes that with such immense wealth one could do a generous amount of good for one's friends. On the other hand, one could also wreak a hateful vengeance on one's enemies.

Now freed from prison, and armed with untold riches, a wealth of intelligence, and a countenance utterly unrecognizable, Dantes fulfills his vow to wreak complete and utter revenge on those who conspired against him.

The proof is in the narrator!

The Narrator is a key point when embarking on an audio book that is over 50 hours long. To that point B.J. Harrison is to be highly praised for his performance! I will be looking for more titles graced with his narration.

A book to last the ages

At first when I decided to listen to this book I was scared not only because of its length but also by the time from which It was written. Being of the younger generation I felt that I may not be able to understand the writing style of this book. Now finished with the book, I can reflect that my fears were for nothing for this book kept me interested til the very end. In the end I was not complaining about its length but the fact that the reading was done and the story over. This is an extraordinary book and is definitely one of the best I have read. If you are interested in getting this book, don't worry about the length or the time in which it was written. This book will surprise you. I did to me and I am 20 years old.

One of the best readers (esp for the classics)

If you could sum up The Count of Monte Cristo [Classic Tales Edition] in three words, what would they be?

The book is better than, more complex than, more unbelievable than, any of the filmed versions.

I particularly liked how much I learned about the time period and this area of the Mediterranean.

Have you listened to any of B.J. Harrison’s other performances before? How does this one compare?

B.J. Harrison is one of the best readers I've heard. Able to do many voices compellingly, believably, and back-to-back. Even my kids were stunned when they realized it was all one reader.

I am so glad I listened to the samples and just didn't go with the book with the most ratings. Harrison's narration is far superior than any of the others. In some of the other recordings you can hear the narrator breathe, I hate that. Not with this one, it is perfect.

Very hard to put down. I fell asleep listening to this in bed more than once. Not because it was boring at all, but because I stayed up too late and should have been asleep hours ago.

5 out of 5 Millions in Diamonds

What did you love best about The Count of Monte Cristo [Classic Tales Edition]?
I love, love, love this classic novel. Definitely one of my all time favorites. The complexity of it is just brilliant. It's not just a revenge story (though the revenge is juicy and deserved!) but also a story of hope and forgiveness.

What was one of the most memorable moments of The Count of Monte Cristo [Classic Tales Edition]?
Edmund's final revenge that turns into forgiveness.

Have you listened to any of B.J. Harrison’s other performances before? How does this one compare?
He narrates a few of Poe's short stories I love and his voice work is amazing.

If you were to make a film of this book, what would the tag line be?
Revenge at all costs!

Any additional comments?
The length of the novel can be intimidating but it is so engaging, and the prose is so poetic. I book marked a lot of sections. There are so many details between the events and the characters' connections. There is just so much planning involved that A) I would have loved to see the outlines that Dumas made and B) I don't know how anyone can read an abridged version. So many little details from early in the story come back later. You may think something is insignificant, but it's not. Every subplot has a purpose. I love the evolution of Edmund's character from innocent and naive to worldly, educated and cunning. I don't know how Edmund juggled all those identities and stories.

best narrative performance i have ever heard.

of course the story is a classic, but the reading performance is the best ive ever heard. please dont miss it.

How did I go so long without reading ?

It is very long but very worth it.
This title may now be one of my favorite books... and I am an avid reader.

I have seen reviews on the abridged versions that were negative and I have to say pick up this copy. The full length work is worth it. This version has nearly 50 more hours of content then some of the abridged copies.

none of it did I find tedious ... I sat listening to this great narrator who has many voices and keeps them consistent. it is like listening to an old radio show. you can tell who a character to a scene is before they are introduced.

very long book but I couldn't put it down. i thoroughly enjoyed it. narrator is excellent.

The Count of Monte Cristo is a classic tale of an innocent man wronged and the revenge that he brings to those who wronged him. It’s interesting to compare and contrast this story with the biblical story of Joseph and his brothers and I can’t help but wonder if Dumas intentionally modeled this story after that. Of course in the Bible , Joseph’s brothers showed remorse and Joseph famously said “Do I stand in Gods stead?” While in Dumas’ tale the conspirators remain despicable, yet the Count reaches the same conclusion as Joseph-revenge is the Lords
The book is very long and I turned up the speed to 1.75 You might want to do likewise
BJ Harrison as the narrator has an amazing repertoire of voices and characters although I’m not sure that I would necessarily envision them all as portrayed

A fun classic.. except for the fillers.

The story is pretty good, but drags in sections. I chose the unabridged version to experience the complete story. I think an abridged version would be more enjoyable. You could easily cut out half of the book and still get the same story. Sometimes it feels like there is a lot of filler in-between the juicier parts of the story. The Narrator is fantastic, and a joy to listen to. His voice acting is what kept me coming back for more. Overall, I recommend it. It is a classic and the story overall is good. But be wary that as you listen, parts may lull you into a bit of boredom before picking up again.