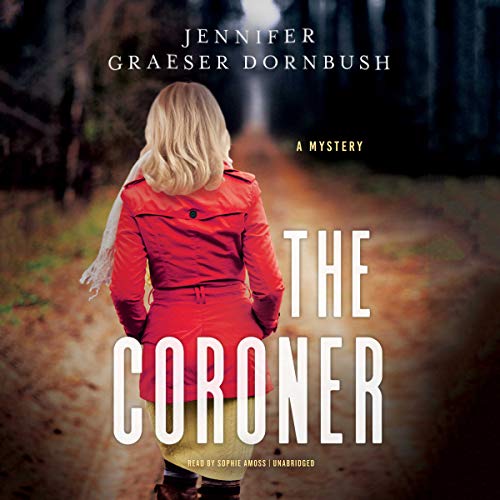 Summoned from her promising surgical career first to her estranged father's bedside and then to his post as medical examiner when his small town needs urgent help with a suspicious death, Emily Hartford discovers home is where the bodies are in this pitch-perfect mystery debut.

Recently engaged and deeply ensconced in her third year of surgical residency in Chicago, Emily Hartford gets a shock when she is called home to Freeport, Michigan, the small town she fled a decade ago after the death of her mother. Her estranged father, the local medical examiner, has had a massive heart attack, and Emily is needed urgently to help with his recovery.

Not sure what to expect, Emily races home, blowing the only stoplight at the center of town and getting pulled over by her former high school love, now sheriff, Nick Larson. At the hospital, she finds her father in near total denial of the seriousness of his condition. He insists that the best thing Emily can do to help him is to take on the autopsy of a senator's teen daughter whose sudden, unexplained death has just rocked the sleepy town.

Reluctantly agreeing to help her father and Nick, Emily gets down to work, only to discover that the girl was murdered. The autopsy reminds her of her many hours in the morgue with her father when she was a young teen - a time which inspired her love of medicine. Before she knows it, she is pulled deeper into the case and closer to her father and to Nick - much to the dismay of her big-city fiance.

When a threat is made to Emily herself, she must race to catch the killer before he strikes again.

The Coroner, expertly written and sharply plotted, is perfect for fans of Patricia Cornwell and Julia Spencer Fleming.

i enjoyed the main characters and the overall story line. this was a good fast paced book, but what a terrible, unfinished, abrupt ending

Is this a book or advertisement for a Nissan Leaf?

Blah. I really wanted to like this. But the characters were bland. The ending was a huge let down. And the author cannot shut up about the Nissan Leaf and helicopter parents. HARD PASS.

Very early on, I noticed the similarities of this plot to the standard Hallmark movie fare and it sustained the similarity almost throughout. A woman (Emily) in a big city with a promising career and a putatively perfect fiance (Brandon) has to go back to the small town home that she hasn't visited in ages to temporarily help with her father's business after he falls ill. Without delay, she meets her former high school sweetheart (Nick, now the town sheriff, who never stopped loving or missing her of course) and circumstances force them to work closely together. Inevitably, the fiance reveals he's a kind of a jerk and is oblivious to what she (or any woman) wants. When the woman and her former beau are finally starting to rekindle their feelings, the fiance shows up and ruins it, but then shows he's as clueless about her as ever and they break the engagement. Hope springs eternal for old romances and who needs a lucrative career and life in the big city even if you've devoted half your life to creating it?

What stops it from being a novelization of a Hallmark movie is that instead of the father running a bakery, a winery, or a chocolate shop, he's the county medical examiner. So, rather than teaching his daughter how to bake the perfect croissant or harvest grapes at the peak moment, he had bonded with her by cutting up bodies together. Further, instead of something like a town parade or a mean developer coming in, it's the murder of a teenage girl that locks Emily in town. These little wrinkles were enough to keep me interested.

However, there are problems. Brandon, the fiance, flies his "douchebag" flag so brazenly by not only being a mama's boy but not seeing how letting his mother plan Emily's wedding might be a problem for her. Then, when it does dawn on him, he then not only locks in the venue, but sets a date for the nuptials, and puts a downpayment on a house without talking to her first...and still doesn't see how that could be an issue for Emily. To make matters worse, Nick (the old boyfriend), is remarkably petulant (in regard to the past relationship) to the extent that even though he knows she literally just arrived in town to see her father who had a major heart attack, he thinks that's a good time to keep her on the side of the road and chat her up about why she left the first time. Further, he knows it was related to the mysterious death of Emily's mother, and even though he worked daily with her father, he never tried once to contact her because he was so wounded.

Now, every murder mystery doesn't need to be a some convoluted "Gone Girl" plot. That said, having "the killer" be a minor character that wasn't introduced until 3/4ths of the way in doesn't really give the reader a chance to deduce the culprit from cleverly placed clues. Quite plainly, it is pretty much the person with obviously the most to gain and motivations that lack any complexity or nuance. It's straight up cash and career advancement. The real mystery is given "The Butler did it" obviousness, how Emily and Nick couldn't have ended the story a hundred pages earlier.

Further, Emily "solves" the mystery by randomly wandering in just the right area to hear the killer confess to the crime and wield the same highly specific and recognizable murder weapon in a fit of rage. Whew, that was lucky. But, oh no, the cell phone that didn't have any problem working everywhere before, doesn't work now. Then, the killer overpowers Emily, the one person on the planet who can reveal his actions, and he chokes her to...temporary unconsciousness but then drags her body to... an office and leaves her. No, but for real, her throat was really sore, and that'll probably teach her to keep her yap shut.

Fine, fine. The romance is lame, and the primary mystery is a bust....however, there's still the mystery of Emily's mom, and she intends to find out the truth. Now or never! She goes to confront her father and, oops another major heart attack. But, he's still hanging on, and he manages to choke out "cancer" by way of explanation for her mother's death, which explains nothing for Emily, and then the book ends. The urge to hurl the book is only stopped by the recognition that it is my iPhone and not a paperback.

not sure what the hype is all about

it was ok but extremely predictable and really unbelievable. the main character is the most selfish person with nor real reasons behind her actions. while we have a cop who has no idea what he's doing. I solved this case in the first quarter of the book. don't waste a credit on this.

Well, that was abrupt! The book just stops without any warning. Oh, there’s a “reveal,” but it certainly falls short of a resolution. Why in the world would a publisher or editor allow the book to stop with so much still unresolved in the storyline? Very frustrating book.

While I enjoyed the book in general, the incomplete ending left me totally dissatisfied. It was not that the author wanted the reader to imagine their own ending (a highly effective plot twist if done skillfully), but rather that the author left a story arc simply unanswered, This not a "trilogy type" of book where multiple story lines need more room to be woven and completed. Instead one simple question that underpinned the character's behavior during the entire book was left unanswered. I found myself puzzled and irritated by the author's choice. My only explanation is that the writer expects the reader to buy the next book to find out that one answer. Sorry, not buying it. It felt to me like a cheap trick, which took away my appetite for buying further books by this author.

Was this a YA book?

Predictable, unrealistic and repetitious. Perhaps this was meant for a very young adult? Waste of this adult’s money!

The plot (which offered so much promise) dragged on, making me regret my choice. Characters were one dimensional. The story line was improbable. The writer ignored realistic difficulties having her protagonist walk seamlessly away from a surgical residency in Illinois to practice medicine in Michigan and resume a high school romance. The murder was committed to give a peripheral character the chance to win a scholarship to a state university rather than have him matriculate at a local community college which, presumably, would have curtailed his career opportunities. The coroner was a good title for this book which was dead on arrival.

I. can't wait for the next one. I really hope there is a next one. I loved the story and the main character.
Emily was. a woman who ran away from her life and home after her mother died in an accident. She ended up as a doctor in Chicago engaged to a. doctor who looks great on paper.
Her birthday starts with a successful surgery and a proposal from her perfect boyfriend.
That is soon eclipsed by a phone call from home. Her father the local medical examiner had a heart attack and a state senator's daughter is killed.
This is. backdrop for a clever mystery.
I am a fan. This one is worth a credit.

This is an enjoyable book. Nothing magnificent, but worth a credit. I expect there are (or will be) sequels, and I will definitely purchase the next one when it comes out.