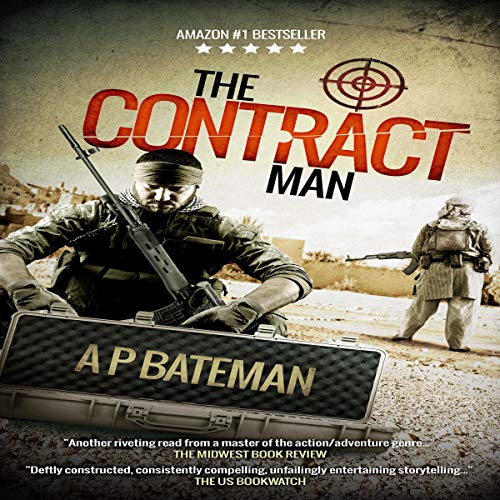 When an MI6 agent is found to be keeping records of his missions to protect himself from betrayal he unwittingly makes himself a priority target. But how do you silence the most dangerous man imaginable? Send him into hell on earth....

While Alex King is sent into Northern Iraq to tidy the loose ends of a botched mission, the archipelago of Indonesia is under communist threat from within its own military. A consortium of worried businessmen call for desperate measures and seek the services of an assassin. But what if MI6 could be duped into taking care of their problems for them? With secret links to China the communist contingent threatens Britain's trade initiatives with the largest mineral producing country on the planet.

In the dark world of intelligence it seems that everybody has their price.

Flaws, but I kept going, it won me over.

Most of this book is one of those with multiple, concurrent storylines that alternate. After a certain point, this style tends to annoy me. I appreciate complex webs of intrigue as much as the next person, but I listen to these as hero stories. So when the "hero" only amounts to 30% of the "airtime" of the book, I get frustrated. I KNOW that the 2/3 is important, supports the story, etc.
I'm not saying it's bad, or shouldn't be there. I appreciate the details, the other characters. I just don't CARE quite so much. I start to feel like I’m wading through hours of stuff (no matter how artfully written, complex, well thought out, or insightful) to listen to the 30% I'm excited about. It's a very tough balance, I'm sure. Story isn't as rich or interesting without it. But after a certain point….

As of 3.5 hours in, if I had to estimate, I'd say
1) Only about an hour had anything to do with Alex King.
2) about a hour was devoted to a detailed account of the torture of a character we don't even know. We meet him bound and hooded in the back of a car, they tell us his name, eventually why they are torturing him. But mostly it's just about describing his torture.
For the first 2/3 of the book we have absolutely no idea how it or the character fits into the story. It is totally random. It's almost like a commercial break from the rest of the story. A torture commercial.
3) Another hour details long tedious interactions between two characters in which no progress is made. They verbally go back and forth but the whole exchange and plan could have been explained or "developed" in less than 15 min. One of these character's voices is really annoying, neither of them are likeable or particularly interesting. This also seems to have nothing to do with what is happening in the Alex King story--that is only explained 3/5 into the book.

Then they go in the house to have an important conversation. Except that is the NEXT chapter. The 15 min chapter covers only those 3 completely useless events in which nothing happens.

There's another 5 minute chapter in which 2 characters do nothing but discuss the living room furniture. (seriously, I'm not kidding)

Maybe it was just my perception, but the bizarre detail always seemed to be about everything OTHER than Alex King. It's almost like someone told him he had to flesh out the other storylines so he went back and added a bunch of detail.

It switches between these storyline's WAY too fast. Sometimes there won't be more than a few sentences of one before it changes to another. You've barely had time to register what storyline is or what is happening and then you're jerked into another. There's never time to get into any of them. It's like catching snippets of conversation. It's made worse by the audible format because sometimes you can't tell until partway through that it IS a new storyline.
When it's a tense time and it's switching between people's perspectives during an "event" I can get it. But that was not the case here.
I can't develop any sense of wanting to know what happens next, because there is no continuity of story, there isn't a "next" because you're still trying to figure out where you are.

Everything is chopped up in a completely indiscernible way. None of the breaks seemed natural. It would stop in the middle of a conversation, jump to another storyline or two, then come back in the middle of the conversation where it left off.
The chapters are broken at seemingly random, too. Some chapters contained snippets of multiple storylines. Other chapters stop in the middle of a scene or conversation and start a new chapter to finish it.
It was so choppy and disorienting it drove me absolutely crazy. It was really hard to keep going and deal with all of that for a mere 30% of the story I liked.
After while I just started advancing ahead during the tedious bits and honestly I didn't miss anything. It took 10 sec to figure out what I missed

ALL that said.
I kept going, and about halfway though, it seemed to iron itself out. It starts focusing more on Alex King, and I enjoyed it a lot more. I was invested, wanted to know what happened next, wanted to "stick with him" through the next steps. I started to like him and he became interesting.

It won me over in the end.

I'm hoping the flaws are maybe a side effect of a new author or book series or whatever and that the rest of the books are more like the last half.