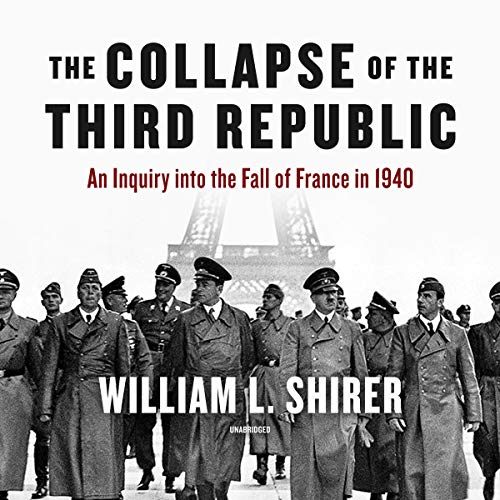 The Collapse of the Third Republic

As an international war correspondent and radio commentator, William L. Shirer didn't just research the fall of France. He was there. In just six weeks, he watched the Third Reich topple one of the world's oldest military powers - and institute a rule of terror and paranoia.

Based on in-person conversation with the leaders, diplomats, generals, and ordinary citizens who both shaped the events of this time and lived through them on a daily basis, Shirer shapes a compelling account of historical events - without losing sight of the personal experience.

From the heroic efforts of the Freedom Fighters to the tactical military misjudgments that caused the fall and the daily realities of life for French citizens under Nazi rule, this fascinating and exhaustively documented account from one of the 20th century's most important historians makes the events of the fall accessible to a younger audience in vivid and memorable style.

An absolute joy to rediscover this monumental work which I first read over 40 years ago. Shirer's command of the language and meticulous research make this a classic of modern history. His intimate knowledge of the events and his ability to bring the characters alive are unparalleled, but his superbly crafted prose is never overwhelmed by the facts. From beginning to end his writing is vigorous, precise, cultivated and totally accessible.

Superbly and subtly read by Grover Gardner who mirrors the precision and faultless rhythm of the prose. With only one reservation, however : Gardner's pronunciation of French, especially the names of many protagonists is often approximate and at times downright poor. This is disappointing, but given the overall standard of excellence of this work and its production, a flaw to which we may turn a blind eye, or deaf ear as the case may be.

I bought The Rise and Fall of the Third Reich a couple years ago and absolutely loved it. I found this book and when I saw Grover Gardner did the reading I had to give it a try. I love the way Gardner reads Shirer’s work. It’s as if he was sitting across from you looking into a glass of Scotch and telling you a story.

This is a story of the ant and the grasshopper. The ant works hard all summer to prepare for winter and the grasshopper just plays and relaxes. Then winter comes, there is no food and the grasshopper complains and blames everyone else for its problems. The French government had so many warnings about what Germany was planning and they just stick their heads in the sand.

Shirer goes into so much detail on the subject you will almost be a scholar when you finish the book. The first part of the book is the backstory which starts in the late 1800s. I had a difficult time staying into the book at times because I didn’t know any of the people. Shirer is building a foundation and setting the tone for the eventual collapse of France. The second half of the book I could not get enough of. I throughly enjoyed it and I am thrilled to have it in my collection.

William Shirer and Grover Gardner Do it Again!

It has been some years since I read (listened to) William Shirer's incredible history of the Rise and Fall of the Third Reich and I plan to revisit it soon because it was such an amazing and informative listen. I didn't think this one, covering the French Third Republic, would hold my interest anywhere near as much.

I was mistaken. This was utterly fascinating and provided much insight into the ready collapse of the otherwise militarily powerful French in the face of Nazi aggression. This book does a lot to fill in the missing pieces that allowed this terrible war to take hold and is a wonderful complement to Shirer's previous work from the German 'side of the fence'. As usual Grover Gardner does a magnificent job in narrating the work.

For those of you have have read or listened to William Shirer's "The Rise and Fall of the Third Reich," I'm sure that the majority of you found it to be one of the most compelling books ever written on the Nazi Party. I myself, after being so intimidated for years by it's the exceptional length, thoroughly enjoyed Grover Gardner's narration via Audible. That said, this post isn't about that monumental tomb.

Recently I came across Shirer's "The Collapse of the Third Republic." Tracing back the history of French political instability for close to 80 years, Shirer - a man clearly with affectionate feelings towards the French - dives deep into the underlying root causes that ultimately would lead to the French collapse and defeat to Hitler's Germany in only 6 weeks.

The narrative has long been that, "German had an extreme advantage in terms of technology, especially in tanks, "The German feint through Belgium and ultimate breakout through the Ardenne completely ruined any hope at resisting the armored and aerial superiority of the Germans," along with assertions that the French simply were dealing with the results of WWI, in which at battles like Verdun, German Chief of the General Staff Erich von Falkenhayn's goal was to "bleed France white;" despite all of these having a certain degree of truth to them, Shirer peals back to the lesser known and more impactful events which transpired well before the battle for France had begun to expose the roots of the fall of France.

Personally, as someone who has not spent the majority of his academic career focused on WWII (and especially the French in that conflict,) for anyone interested in WWII and how Hitler was able to conquer the largest, most well supplied and resource-rich nation in all of Europe in a matter of weeks when only a generation prior, arguably a much better land-based military (in terms of leadership and strategy,) slumped to defeat in 1918; this book is absolutely phenomenal.

Again, I preferred to listen via Audible where the same narrator assumes his role as the voice of Shirer -- whether you prefer to read the hard copy or simply listen; I couldn't recommend it more.

I read Collapse about 20 years ago and thought it was pretty good but when another reader or listener said it was better than Decline and Fall of the third Reich i thought the guy was nuts. That is, in my view the best single volume history of the Nazis. (The Richard Evans trilogy is outstanding). Anyway, having listened to all 950 pages again i would have to say the person was sort of right, it's really a tie in my mind. The Reich is filled with villains you love to hate, the Third Republic is filled with worms you love to despise.

Shirer lead an amazing life and luckily he is also an amazing researcher and writer. He was everywhere you read about in the histories of these times. At Munich when Chamberlain and Daladier capitulated to Hitler, at the rail car when the French signed the disgraceful armistice., etc. Shirer's irony can be pure acid and they are all deserving of his scorn.

Grover gardner is my favorite narrator and he reads all 950 pages so so should you, or rather let him read it to you. You'll need to set aside a lot of time but every minute is worth it. Buy this book.

Brilliant dissection of the Fall of France

I am by no means a student of French history, but I have read a number of books on the Third Reich and World War Two. This is by far the best explication of the circumstances leading to the utter collapse of the French army and Republic in a mere six weeks in May and June of 1940. The book is terrifically well written. There isn’t a dull chapter. The reading by Grover Gardner is such a pleasure. His pronunciation of French names, places and terms seemed pretty nearly perfect to me, although I’m hardly a fluent French speaker. I highly recommend this book to any student of twentieth century history or the history of World War Two.

Shirer is easily one of the finest historians I have ever read, up there with Will Durant and Shelby Foote or they are up there with him. I often wondered why France had failed so suddenly and completely in 1940 and what is the flaw that still spoils the Gallic national character even today. Shirer spells it all out with relentless factual detail and Grover Gardner narrates this truly fascinating story with perfect pitch. Highly recommended for anyone curious about one of the 20th century’s most amazing events.

The epitome of good men doing nothing

“All that is necessary for the triumph of evil is that good men do nothing.”

Watch good men doing nothing- except destroy the French Third Republic, a bullwork of chaotic and glorious democracy. They destroyed it by parts, slowly at first, then with rapid abandon - with inaction, timidity in the face of bullies, and blindness. Watch them underestimate the dangers of fascism and radicalism and nationalism. Watch them overestimate the strength of their governmental and social system.

Their actions had dire consequences... for the French, for their hapless 'allies' they were sworn to protect, for the world.

Hear it in the words of one of Murrow's stars, who reported it in real time from the places this ridiculous episode of humanity took place. Shirer was a witness to the insanity of World War II and a most gifted narrator of the events that unfolded.

Grover Gardener is phonemenal again as he channels Shirer.

Don't think this could happen again? Then you're a fool. Because “All that is necessary for the triumph of evil is that good men do nothing.”

As with his other first hand accounts, Shirer brings insights and understanding only available to ‘those who were there.). While certainly painful at times to anyone who loves France, this book is well worth the effort to read and understand.

Enthralling Story of the Fall of France in 1940

Captivating and fascinating; more detailed than available in most narratives pertaining to this topic. An appealing tome for the serious student of this subject.