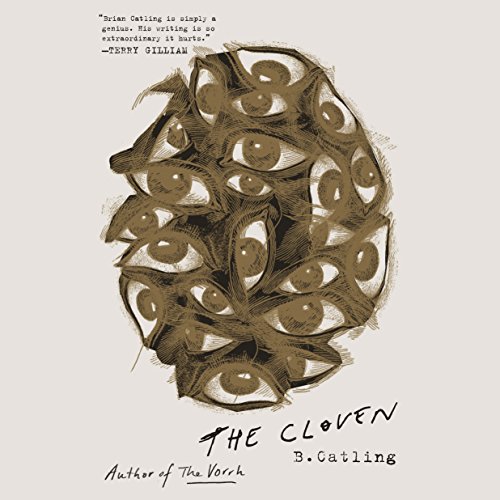 The epic climax to B. Catling's beloved Vorrh Trilogy. A Vintage Books Original.

In the stunning conclusion to this endlessly imaginative saga, the young Afrikaner socialite Cyrena Lohr is mourning the death of her lover, the cyclops Ishmael, when she rekindles a relationship with famed naturalist Eugène Marais. Before departing down his own dark path, Marais presents her with a gift: an object of great power that grants her visions of a new world. Meanwhile, the threat of Germany’s Blitz looms over London, and only Nicholas the Erstwhile senses the danger to come. Will he be able to save the man who saved him? And as Nazi forces descend upon Africa, will the Vorrh finally succeed in enacting its revenge against those who have invaded and defiled it?

The Cloven is an audiobook of battles and betrayals, in which Catling's incredible creations all fulfill their destinies and lead us to an epic conflagration with the fate of mankind hanging in the balance.

“A surrealistic and entertaining amalgamation of religion, philosophy, art, and nature.... Catling draws a compelling picture of man versus nature in an impressive story of good and evil, environmentalism, and the will of man to conquer all.... Visceral, violent, and literary.” (Booklist)

Prepare to Get Lost

We’re told at the beginning of The Vorrh that the great, dark forest of the title has a powerful effect on any human who ventures into it. At the extreme, the forest consumes consciousness, turning once-ordinary people into the soul-less Limboia. Our first hero, Williams – so much a protagonist that he actually narrates in the first person for a time – eventually loses his memory and sense of purpose, helped along only by the power of the great bow he’s constructed from his dead, mystical wife. Even those who venture into its edges for brief periods to oversee exploiting its resources can feel their spirits becoming unsettled. They want to get through their work and then flee.

I think that’s ultimately a good metaphor for what it’s like to read this. I can, if I put my mind to it, reconstruct the seven or eight central threads and characters here: the Ghertrude-Syrena-Ishmael triangle, Williams and his quest/murder/reassemblage, the Hector-Nicholas fusing, the Sidrus/Wassidrus unraveling, the lost Modesta, the lost Rowena, the strange background of the Kin, the economics of Essenwald, and the real-world references to Raymond Roussel, Edward Maybridge, and Eugene Marais.

Remembering what I read takes an effort, though, and what comes to mind more readily is the sense that I’ve experienced a bizarre and overwhelming journey. I have not walked through the world that Catling created, but I have been to it. That’s the experience of reading this; you lose a sense of coherence, even a sense of self-as-reader, as you go through the dark and impenetrable jungle.

So, when I say I recommend this, I mean that I recommend this for the ineffable experience of reading it. I can easily see how someone would dislike it for its persistent refusal to follow anything like the implied “rules” of fantasy or even of the novel itself. It breaks all sorts of conventions, and even I – who very much enjoyed it – can’t pretend to make sense of large portions of it.

But it’s that wide refusal to settle for what we expect that makes it so rewarding. Catling fights against the tyranny of a domesticated imagination. There are constant “wild and untamed” passages, elements that don’t quite link to the whole. Read this for its various stories, and maybe even more for some of its magical scenes. Above all, though, read it for the promise that it will take you on a compelling journey that, once it’s finished, will seem as mysterious after the fact as before.

I’ll add simply this: if the first volume of this seems to me a celebration of the feminine, and the second seems masculine, this one seems committed to a kind of hermaphroditism. Throughout we see characters who combine in bodies, from the way Williams is born anew in Sidrus/Wassidrus to the way the writhing bodies of ants function as a composite corpus, to the way those same ants bring about the merging of Ishmael and Modesta and the restoration of the Limboia to something like real life. And, of course, we have the climactic end when Hector joins with Nicholas to give the Erstwhile a chance at something like redemption for his part in the failure to keep Adam and Eve from the Tree of Knowledge.

Confused? Yeah, so am I. But I am also fulfilled. I may venture back into the Vorrh someday, back to a place that will be both familiar and bewildering. For now, in the shadow of the reading adventure, I’m satisfied to have seen the great shapes I’ve read about, and I recommend it to anyone willing to live in such deep uncertainty, anyone willing to resist the conventions that govern so much of what’s out there.