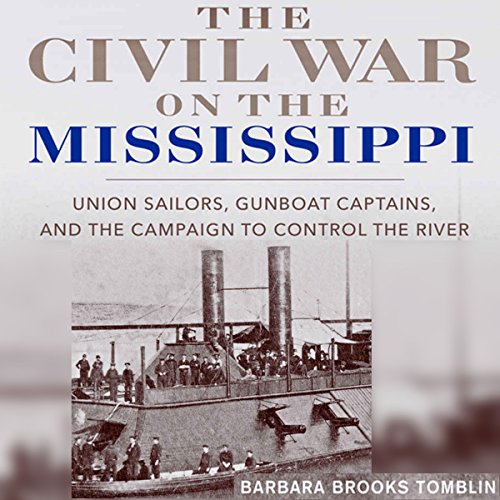 The Civil War on the Mississippi

During the Civil War, both sides believed that whoever controlled the Mississippi River would ultimately be victorious. Cotton exports generated much-needed revenue for the Confederacy, and the Mississippi was also the main conduit for the delivery of materials and food. Similarly, the Union sought to maintain safe passage from St. Louis, Missouri, to Cairo, Illinois, but also worked to bisect the South by seizing the river as part of the Anaconda Plan.

Drawing heavily on the diaries and letters of officers and common sailors, Barbara Brooks Tomblin explores the years during which the Union navy fought to win control of the Mississippi. Her approach provides fresh insight into major battles such as Memphis and Vicksburg, but also offers fascinating perspectives on lesser-known aspects of the conflict from ordinary sailors engaged in brown-water warfare. These men speak of going ashore in foraging parties, assisting the surgeon in the amputation of a fellow crewman's arm, and liberating supplies of whiskey from captured enemy vessels. The Civil War on the Mississippi not only provides listeners with a comprehensive and vivid account of the action on the western rivers; it also offers an incredible synthesis of first-person accounts from the front lines.

"A fascinating and detailed look at everyday life aboard the ships of the Union navy charged with securing control of the Mississippi River." (Spencer C. Tucker, author of Blue and Gray Navies: The Civil War Afloat)
"This well-written, fast-paced narrative belongs on your bookshelf, even if you think you have read the last word about this innovative naval force." ( Civil War News)
"Goes beyond anything in the existing literature on the river navy." (James M. McPherson, author of The War that Forged a Nation: Why the Civil War Still Matters)

Enjoyed the historical record of war on the Mississippi River. Had sought this information for years. As a native of Illinois had been down to Cairo and a now resident outside of st. louis was well aware of its role in the war. Have been to several of these sites along the river. this book tied all I have visited into one nice package.