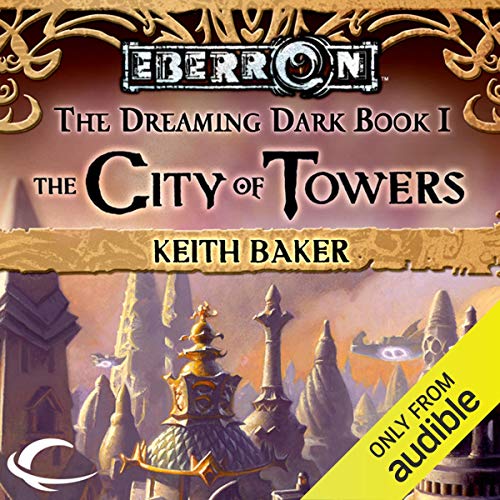 The City of Towers

The City of Towers launches a brand new novel line set in the world of Eberron, Wizards of the Coast’s newest D&D campaign setting.

Author Keith Baker’s proposal for the exciting world of Eberron was chosen from 11,000 submissions, and he is the co-author of the Eberron Campaign Setting, the RPG product that launched the setting. The Eberron world will continue to grow through new roleplaying game products, novels, miniatures, and electronic games.

Setting the Stage for the World of Eberron

The Dreaming Dark series gives the reader a great start into understanding the feel of the Eberron Campaign Setting for Dungeons & Dragons.

The Series has a pretty linear progression
The City of Towers takes place in the City of Sharn, introducing the reader to the Warforged, the Dragonmarked Houses.

The Shattered Land takes the reader to Xend’rik, and uncovers a glimpse into the world of the Eberron Drow.

The Gates of Night takes this adventure to the Planes and sheds some light on the driving forces of this universe.

Personally I loved the first book, the City of Sharn is so full of adventure it almost shames all other campaigns I have read about, and I suppose that is why my interest in the series waned as the story moved from this city to uncover the setting as a whole. The adventure gets to be a bit "over the top" especially as it runs into the final book of the series.

The change in narrator for the 3rd book didn't help with this... at all.

What did you love best about The City of Towers?

This is an introductory novel to the then new campaign setting for Dungeons & Dragons. Every now and then, mixed with and in explanation of some parts of the plot, there are excursions on the races, societies, and magical aspects of the world. The way the story and the explanations mingle together is well crafted (a long way since the Forgotten Realms and better than Dragonlance).

The heroes of the story are all interesting. Maybe my favourite is Daine, probably the main male protagonist. I like that way the character has religious doubts and doubts altogether on what to do next, after the Last War. That's the kind of character I like best.

Certainly a professional, maybe his voice sounds too "old" for these characters (all young or young-ish). Nice rhythm.

I'd suggest this book to any D&D geek, like myself, or to anyone who wants a good introduction to fantasy fiction. The narrator has certainly done his job, but I would have preferred a younger voice. He tries to give each character their own unique voice, but sometimes the effect is slightly comical (the warforged and occasionally Lei). Still, the narration is smooth and the audiobook is certainly worth its credit!

I read this story in print and was happy to find it in unabridged audio book format. the narration was somewhat lackluster. I will need to think it over before I pick up the next in the series.

A New World, a Pleasant Surprise!

This book definitely came as a pleasant surprise. Being new to the world of Eberron, I was delighted to discover a world setting for which I had been searching for a long time, one that combines fantasy and sci fi in such a way that opens up huge possibilities for storytelling and worldbuilding. And the setting for this particular tale is even more enthralling - a massive vertical city built upon impossibly tall towers, each housing its own kind of culture from the tops to the depths.

But all that aside, I was surprised at the quality of the writing from Keith Baker. He definitely brings the world and the character to life in just the right way. That, and the performance of the narrator, made the dialogue sound witty and natural, and the characters burst with life. Also the nature of the story as kind of a detective-type story and not an epic world-shattering event felt very refreshing.

Another thing that I like about Eberron is the integration of the races. In this world, the traditional evil races such as goblins, orcs, and even medusa are not simply enemies that pop out to try and kill the characters. These races exist in their own pocket of Sharn, with their own societies, and their own rules. Traveling there does not necessarily battle has to occur - although racial tensions still make such an encounter likely. But when battle does occur, it's just as likely to be between a human and dwarf, or some other race. That kind of leveling of the playing field also makes Eberron feel refreshing and interesting.

I enjoyed this one a lot, and hope to check out the other two books in the series and maybe other books by Keith Baker.

A stilted performance for a stilted story

The best part? Surely the inventive about the giant tower city, the use of monsters that are not simply stuff to be killed and enemies which are not the usual band of brigands or assassins. Enemies here are there for a reason. Also this warforged thing is interesting

The worst? The fact that mysteries are kept artificially. Most of the time there is no reason to not disclose information. But people keep not telling other people important information for no discernible reason. Some times it's hard not to wall bang my player for how idiotically people do not tell each other important stuff.

The only way would be to rewrite it from scratch, as it's presented (artificially) as a mystery story instead of the subtone of a character story which is better written and should have been the lead. When the mysteries can be solved by simply not hindering the people you hire or by asking your friends for help instead of being mysterious for mysteriousness sake... then there's a problem.

Sure, in that it's extremely stilted just like the story. The narrator makes random pauses as if he had a case of strong hiccups.

Could you see The City of Towers being made into a movie or a TV series? Who should the stars be?

Could be interesting, visually, but no.

This is a good introduction to the Eberron campaign world. I felt that I started to know the characters and feel for them. The levels of Sharn is explained though had I not seen illustrations in the 4e campaign book I do not think the description would have been enough to visualize it. The social effects of Cyre is explained well though not really why there is so much prejudice toward its refugees. I think this first book should have been more historical about the war rather than talking around it on the way. But for what it is it's a good story.

Really grasps the Spirit of Eberron, and lures the reader in. Each character a unique story with a rich history to be learned.

A good intro to Eberron

Let me start by saying the narration is excellent. Now, I am not new to D&D but am completely new to Eberron. Before delving into rule books I might never use I wanted to get a sense of what made this setting different from Forgotten Realms or Greyhawk. It does a good job of highlighting at least a part of the setting that isn't traditional high fantasy. My only complaint about the audiobook is that the appendix is at the end (duh!) but really should be heard first (or at least early on after starting the story) to get a stronger idea of the setting. It didn't really hurt the story but it would have made some of details easier to contextualize. I plan on continuing the trilogy.

Great introduction to an amazing setting and worl

I've been playing D&D for over 20 years. I really enjoyed this story and the performance!

A Wonderful Introduction To Eberron

As a first time aspiring DM to the world of Eberron this book definitely helps pull back the veil to the rather unconventional world of Eberron opposed to regular d&d settings. The narrator stands out brightly though, his skill is AAA hollywood quality voice acting.

Listen to it, to get a feeling for the world. I enjoyed the story alot