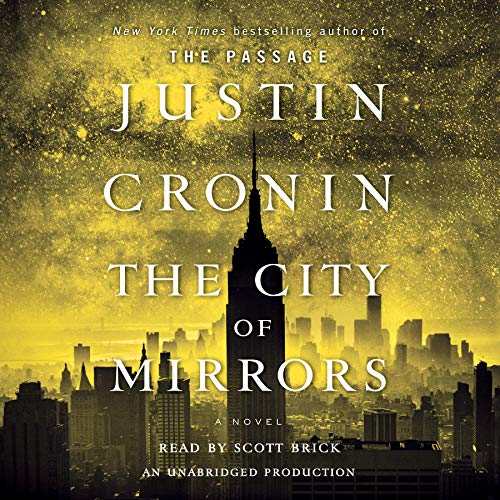 The City of Mirrors

“A thrilling finale to a trilogy that will stand as one of the great achievements in American fantasy fiction.” (Stephen King)

You followed The Passage. You faced The Twelve. Now enter The City of Mirrors for the final reckoning. As the best-selling epic races to its breathtaking finale, Justin Cronin’s band of hardened survivors await the second coming of unspeakable darkness.

The world we knew is gone. What world will rise in its place?

The Twelve have been destroyed, and the terrifying hundred-year reign of darkness that descended upon the world has ended. The survivors are stepping outside their walls, determined to build society anew - and daring to dream of a hopeful future.

But far from them, in a dead metropolis, he waits: Zero. The First. Father of the Twelve. The anguish that shattered his human life haunts him, and the hatred spawned by his transformation burns bright. His fury will be quenched only when he destroys Amy - humanity's only hope, the Girl from Nowhere who grew up to rise against him.

One last time light and dark will clash, and at last Amy and her friends will know their fate.

Look for the entire Passage trilogy:

The Passage
The Twelve
The City of Mirrors

Praise for The City of Mirrors

“The City of Mirrors is poetry. Thrilling in every way it has to be, but poetry just the same... The writing is sumptuous, the language lovely, even when the action itself is dark and violent.” (The Huffington Post)

“A masterpiece...with The City of Mirrors, the third volume in The Passage trilogy, Justin Cronin puts paid to what may well be the finest post-apocalyptic epic in our dystopian-glutted times. A stunning achievement by virtually every measure.” (The National Post)

“Superb... This conclusion to bestseller Cronin’s apocalyptic thriller trilogy ends with all of the heartbreak, joy, and unexpected twists of fate that events in The Passage and The Twelve foreordained.” (Publishers Weekly [starred review])

“Readers who have been patiently awaiting the conclusion to Cronin’s sweeping postapocalyptic trilogy are richly rewarded with this epic, heart-wrenching novel.... Not only does this title bring the series to a thrilling and satisfying conclusion, but it also exhibits Cronin’s moving exploration of love as both a destructive force and an elemental need, elevating this work among its dystopian peers.” (Library Journal [starred review])

An infuriating mix of unbearable and inspired

If you've read the first two books, you have to read this one. But, this is by far the weakest in the series. Any of the "Zero" dialogue is a competition to find out what I would hate more; the loathsome writing of the character or the utterly unbearable narration of the character. And this is really sad because the narration and writing of Zero's backstory is fantastic. The rest of the book was great. But I had to skip over the droning, sickening voice of the narrator who seemed to relish being the voice of the biggest most obvious and predictable douche you'll ever meet in real life or in fiction. I really can't say enough about how much I hated these portions of the book. It was so bad that I am not sure I can stand the thoughts of any more performances by this narrator.

after a great story, a huge build up, only to be smothered and lathered with Disneyland and heartfelt poetry for an ending. the last few parts of this book fall into a hole of love and God saves the day. total cop-out screw you cronin!

Cronin can write. There is no doubt about that. But, this book would have benefited from some additional editing. The pace is one slow train of depressing non-climactic events. This is not helped by the narrator's creeping monotone. I am glad I finished it. I adored the first and second books, which I read. Maybe choosing to listen to this one was not the right choice.

After reading the first two books I found myself upset because of the blown opportunity by the author and especially the editor. This story had the potential to be fantastic, and even after the disappointments in the first two books I was really hoping they could turn it around with the last book.

When you listen to a book vs reading a book I've realized that repetitive phrases and words become like claws on a chalkboard. The author loves to repeat himself, I'm guessing he doesn't know he does it, the editor missed it and it totally ruined the experience for me. If I hear the word "abide" one more time I'm going to have to go make a White Russian then go bowling.

On the positive side, he was able to wrap the trilogy up in a way that didn't make me cringe, although the fight scene with Zero and the simultaneous scenes with Michael and Amy dragged on forever.

If you've read the first two, you might as well finish it out with The City of Mirrors, but if you haven't sunk any time into this series yet I'd advise to move on to something else.

I was severely disappointed. Cronin set up an amazing story with books one and two and then it falls flat in City of Mirrors. In an effort to sound really profound he forgot to tell a good, coherent story. I had to force my way through it and wouldn't recommend it.

Boring story punctuated by all too brief entertaining parts

Headline should just about sum it up. There are parts that seem wholly unnecessary to the plot.

Would you ever listen to anything by Justin Cronin again?

Narrator not a problem

I enjoyed the first two books in this trilogy so I was looking forward to the third. Tried listening at higher speed to get to a good part which didn't happen. Constant dialog with no action. Total waste of time couldn't finish this book.

Would you try another book from Justin Cronin and/or Scott Brick?

Felt like someone else wrote this book, seemed like it was rushed and not thought out, really a let down.

What could Justin Cronin have done to make this a more enjoyable book for you?

First two books were alright, this last one tho was way too long. Overwritten with way too many metaphors and analogies. Whole sections that could have been condensed. Annoying characters. All kinds of weird, over done metaphysical mumbo jumbo. I kinda was just wishing the world would end already.

Found myself skipping over sections

Not this one, unfortunately. It went on and on and on.

Would you be willing to try another book from Justin Cronin? Why or why not?

I became annoyed by the dramatic droning tones after a while.

I wanted to like this book but it annoyed me more than anything else. It was droning and repetitive and at times just downright eye-rolling.

At times I said, "Get ON with it, already!" The story line just stagnated.

The narrator did a very good job. The basic story throughout the trilogy was solid. Nevertheless, because the story is predictable, in some places it drug on.