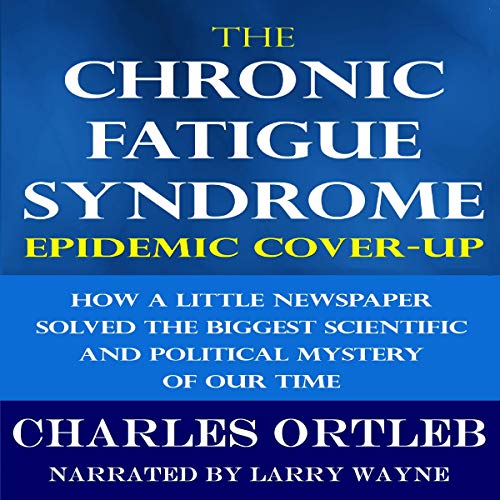 The fact that sexual partners of chronic fatigue syndrome patients contract the illness should also have made it clear it is contagious, as well as the fact that entire families and friends have come down with it. And, as this audiobook makes clear, the fact that the pets of people sick with chronic fatigue syndrome also get the illness should have made it painfully obvious that the world is dealing with a unique and terrifying pathogen.

This is an audiobook based on the investigative reporting of New York Native, a brilliant and uncompromising little newspaper that pioneered the coverage of both AIDS and chronic fatigue syndrome. Back in the '80s, Rolling Stone said Charles Ortleb's newspaper deserved a Pulitzer Prize, and Randy Shilts gave the newspaper high praise in his best seller And the Band Played On.

This is a must-hear audiobook for anyone who wants to know the disturbing history of the chronic fatigue syndrome epidemic. Why have the CDC and NIH pretended that the communicable disease fraudulently called "chronic fatigue syndrome" is a mystery for over three decades? By the end of this audiobook of inconvenient truths, the answer is crystal clear.

Fascinating and eye-opening. I was spellbound. A powerful expose of the politics of science, and relevant to anyone concerned about their health. As a former and earlier sufferer of CFS (aka CFIDS or ME) I am one of the few lucky ones to have escaped its highly debilitating grip, and while it's been more than three decades since, I will never forget the horror of that disease. I learned then how useless the medical profession can be (and still is) and how arrogant and self righteous in its ignorance. Through this book (as well as another, "Plague") I now more fully understand how outright corrupt the scientific community is at its highest levels and how devastating that corruption is on the lives of everyone in this country. Kudos to Charles Ortleb, his colleagues, and his brave little paper "The Native" in their pursuit of truth about this disease and its clear connection to the concurrent AIDS epidemic. A must read for anyone who has or knows someone with Chronic Fatigue Syndrome (or whatever current name is trending.) You may learn more than you think you want to know, but to those who suffer, all that really matters is a cure and only the truth can lead to that. Find out with this excellent and well written, well documented book.

Too much information, look elsewhere

The author has certainly done their research. So much so that it’s a real challenge to get to and take away any essential points. “The more you talk, the less I hear” type thing. In dealing with various public health officials at the official agencies, primarily the CDC, well of course he’s encountered charlatans, psychopaths, and inept ignorant bad actors in the upper echelons of power. While it’s useful to confirm things like this as we move through this pandemic, an entire very long chapter dedicated to angry vendetta ranting about 1 well-paid decision making poser doesn’t help the listener understand more about MECFS. I get it. The guy is a crook. The agency isn’t about better medicine. Let’s move on, The writing is full of detail, but again, for this listener it’s too much. One finds themselves trying to skip through sections of numbered but not titled hour long chapters to get to a meaningful takeaway. It’s impossible. I’m sorry I bought this book. The narrative wanders. But I’m not going to wrestle with Amazon for a refund. At the same time I wonder - isn’t there a department at Audible who looks at these products before offering them for sale? What happened to editing? I had no way of knowing that chapters weren’t titled (a format which I think is 100% top priority necessary especially for an research oriented audiobook). All that said, if you’re able to get to it, the must be some great information in this book, I think. Sure, there must be…right? I’ll be quite angry if there isn’t. This book Should be 6 hours long instead of 18 hours long. And I’ll be buying another book on the same subject because practically speaking, this one useless due to it’s needle in a haystack build.