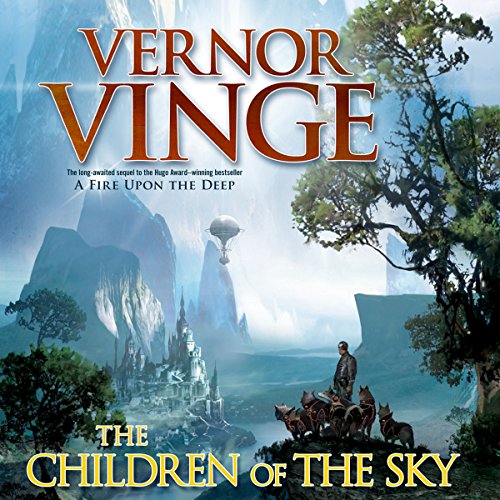 The Children of the Sky

The Children of the Sky

After nearly twenty years, Vernor Vinge has produced an enthralling sequel to his memorable best-selling novel A Fire Upon the Deep.

Ten years have passed on Tines World, where Ravna Bergnsdot and a number of human children ended up after a disaster that nearly obliterated humankind throughout the galaxy. Ravna and the pack animals for which the planet is named have survived a war, and Ravna has saved more than one hundred children who were in cold-sleep aboard the vessel that brought them.

While there is peace among the Tines, there are those among them - and among the humans - who seek power… and no matter the cost, these malcontents are determined to overturn the fledgling civilization that has taken root since the humans landed.

On a world of fascinating wonders and terrifying dangers, Vernor Vinge has created a powerful novel of adventure and discovery that will entrance the many readers of A Fire Upon the Deep. Filled with the inventiveness, excitement, and human drama that have become hallmarks of his work, this new novel is sure to become another great milestone in Vinge’s already stellar career.

"Vinge is undeniably one of the greatest hard science fiction writers to put pen to paper, and he can easily be compared to such greats as Arthur C. Clarke, Poul Anderson, or Stanislaw Lem." ( Wired)
"[T]he near-perfect balance of science fiction's twin traditions of wild speculation and high-intensity storytelling.... Vinge's explosive imagination and deft storytelling make epics zip past like hummingbirds - you'll steal daytime moments to read more, and lie awake at night contemplating what you've read." (BoingBoing.net)

First off, the voice performance is really good. But the story... I wasn't expecting it to be so bad. I finished it because I liked the other 2 books in the series. But now I regret it. Some spoilers ahead... The characters are drooling idiots that I just couldn't buy. You've got tycoon, the richest pack in the world that is also as naive as a 5 year old. Then, you've got the spoiled brats of geniuses that are so stupid as to deny evidence of the blight on pure belief. And to top it all, you've got the main characters that get played by these morons and that in general seem to be unable to talk in front of these deniers. The whole book left me with a sense of frustration as if I had the sit at diner with a climate change denier, a holocaust denier and some conspiracy theorist and not be able to talk. The book also lacks any scifi elements, any technology being delivered miraculously by the ship like some wizard. I don't even care it doesn't build on the universe created in the previous 2 novels. I don't mind new directions in a story. But this one is a total miss and it even has the guts to leave us without an ending. Vinge obviously plans another book in this series.

The story isn't over yet

I've seen a few uncharatable reviews of this book mixed in to the many that suggest Vinge had a ghost writer. Truly, you can not please everyone. I saw no evidence of this.

This is a character story, a view of social dynamics, the community of belief , and how things always work out if you alter the definition of success. It is small in scope and personal.

If you're looking for a grand love story, an easy hero, or the triumph of dazzling technology this is not the book. If you want to follow the story that Vinge is telling and clearly has not finished then you can't miss this installment. I can't say that the book stands on its own because I came to it with the great saga the gave birth to it in my mind.

A Fire Upon the Deep, and A Deepness in the Sky made Vernor Vinge one of my favorite authors.

Unfortunately, this The Children of the Sky was profoundly disappointing. The story was convoluted in ways that were ridiculous, and sometimes clearly just for the purpose of adding length. Characters behaved in ways that weren't plausible, and the end was a level of absurdity that left me feeling Vernor never really wanted to write the book to begin with.

I enjoyed this expansion of the classic 'A Fire Upon The Deep', but was a little disappointed in the choice of narrator. Don't get me wrong - Oliver Wyman is one of my favorites. Indeed, his performance's of the first two Safehold installments were brilliant, but I don't think he had the same energy as Peter Larkin had in 'Deep'.

That being said, the story was quite good, but not stunning. To be fair, all the mind blowing concepts were fleshed out in the first book, so you can't expect to be captivated in the same way.

also, I had a harder time visualizing the "Pack mind" in this offering than the first - not sure why.

All in all, not as good as 'A Fire Upon The Deep', but except for 'Aliens' and 'The Godfather Part 2', what sequel is ever as Good as the original. Anyway, it's well worth the effort.

The first two books in this series showed an incredible depth of imagination, and vision of distant reaches of humanity that I found completely captivating.

With exception of a few glimpses into the tech and history of the humans of the High Beyond, this book is a reread featuring recycled villains, themes, and a metric ton of pointless drama. The protagonists are all indecisive, introverted, and downright inept most of the time. Plot feels completely reactionary to the antagonists actions, our heros seem to have no goal beyond surviving the latest predicament. Contrast this to the previous books, and you may be as frustrated as I was while listening to this.

Worst of all though; even after reopening a few chapters we thought closed in the previous book, very few solid conclusions are reached at the end of this rather long listen. So while I gave the first two installments perfect 5-star reviews and will be listening again, this one's a 2.5

The story was OK, quite unlike the first two books in the series. It was left with one heck of a cliffhanger, which is a little annoying, if you ask me.

If you’ve listened to books by Vernor Vinge before, how does this one compare?

The story is good, but the narration was not so good. By itself, it would be fine, but the new narrator has vastly different pronunciations of many of the names in the book. It takes a little bit to get used to who is who.

Who would you have cast as narrator instead of Oliver Wyman?

The same narrator as the first two books in the novel.

Do you think The Children of the Sky needs a follow-up book? Why or why not?

There has to be. What happens with the blight? Did trillions of people die unnecessarily?

What did you love best about The Children of the Sky?

Great story. Great return to Tines world. I enjoyed the book quite a bit.

I really wish the narrator had listened to the narration of A Fire Upon the Deep and used the same pronunciation for the place and people names. The narration is really slow, but used the Audible app to speed it up by 1.5x and it was fine.

I've been looking forward to this book for 20 years, and despite the high expectations, I was not in the least disappointed. Tines World, and the Tines themselves, are fleshed out in magnificent detail, with new insights on the distributed cognition that made their depiction in A Fire Upon the Deep so appealing. The deeply problematic legacy of the human refugees is also explored. Its interaction with brutal Tinish politics leads to plots within plots. Oliver Wyman does a wonderful job at making each of the many character voices distinct.

Pacing problems and lack of focus

There are some interesting ideas here, but the story focuses way too much on the less interesting facets and takes way too long to get there. Definitely a bit of a disappointment

Although I love science fiction and space opera in general, I hate the "Gilligan's Island" sub-genre; that being my short hand for people from a high tech civilization trapped on a low tech world. Maybe it's because that is pretty close to my idea of hell, and because is deceptive advertising. I paid for scifi book, not a preindustrial fiction. If it wasn't for all of the fun/cool aliens in this book, and my love for the first two installments of the series, I wouldn't have bothered finishing this book.