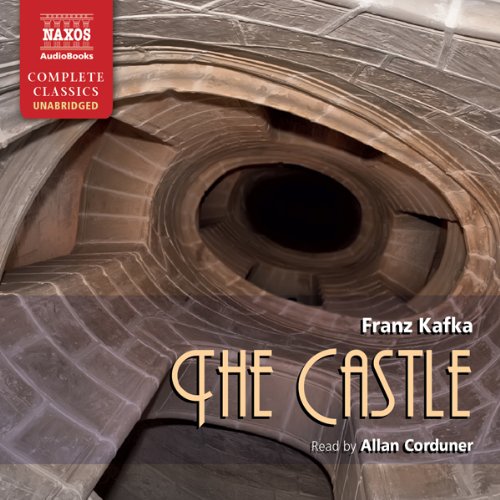 A land-surveyor, known only as K., arrives at a small village permanently covered in snow and dominated by a castle to which access seems permanently denied. K.'s attempts to discover why he has been called constantly run up against the peasant villagers, who are in thrall to the absurd bureaucracy that keeps the castle shut, and the rigid hierarchy of power among the self-serving bureaucrats themselves. But in this strange wilderness, there is passion, tenderness and considerable humour. Darkly bizarre, this complex book was the last novel by one of the 20th century's greatest and most influential writers.

A masculine and coquettish reading

So far (haven’t finished) I like this reading much better than George Guidall's or Geoffrey Howard's. Allan Corduner uses his deep, rough voice (breaking like a well rosined cello) with a coquette’s liveliness. Very striking. So much on the reading.

As for this David Whiting translation, I think it is available only in this audio book format. The Muir translation is supposed to be smoother and more poetic than Kafka’s original. The more recent Breon Mitchell’s is said to be most literal, but can be somewhat awkward. I think Whiting’s is somewhere in the middle. Compare these.

Breon Mitchell: K. stood a long time on the wooden bridge that leads from the main road to the village, gazing upward into the seeming emptiness.

David Whiting (this audio book): For a long time K. stood on the wooden bridge that led from the country road to the village looking up into the apparent void.

Edwin Muir: On the wooden bridge leading from the main road to the village, K. stood for a long time gazing into the illusory emptiness above him.

The book itself I think is the greatest among Kafka’s works, or at least most Kafkaesque in both substance and technique. (Sorry. Too involved to back that up.) But there are technical imperfections such as the excessive use of long speeches and internal reflections. More substantively, the book can seem poorly motivated in places, even if you grant that one’s standing with the castle is the paramount concern for every character. I have a problem with the two assistants, who look like unfortunate props that somehow got in and obliged the author to use them.

This novel, I am told, like many others by the author, is the first draft with minimal corrections. It is doubtful the piece would have retained much of the current form had he reworked it. Unfortunate that he didn’t get to do it; not as if that went against his grain necessarily; he did publish stories in his life time (I am assuming he polished those). Unedited though, the piece obviously lets you into the author’s mind the way no polished work can.

Some of my favorite passage of this book are the opening scene (until K. falls asleep), the bath day scene with the wan “girl from the castle,” the trek though snow and the arrival at Barnabas’s parental home, interview with Momus (from courtyard to outdoors again), the chance meeting with Frieda in Herrenhof after the breakup.

Olga’s long explanations about Amalia seem extremely artificial and strained to me, something I think Kafka would have dismantled had he come back to it.

I feel like I just listened to someone describing a dream they had for 13 hours. The Castle is a fascinating and surreal experience -- I had to take breaks when it made me feel like I was losing my grip on reality.

I personally enjoyed The Trial more, but I'm not sure if that's because it had an ending. It's a shame The Castle cut off so abruptly.

1. The book is very much fun to listen due to one basic fact, Kafka is a master of creating arguments to his characters that sound absolutely logical on the one hand and unbelievably grotesque on the other.
2. Excellent narrator.
3. I kept listening in the hope that the hero will put order to everything, sadly, the book never ends. The theme is clear...
4. Something that did bother me was that all characters, so it seems, possessed the same level of intellect while arguing something. You don't feel the diversity between them in this sense.
5. I liked the book a lot and that is the bottom line.

too much to do about nothing without end

Of the 150 plus books I have listened to this was the most unsatisfying. It is as if Kafka set out to prove he could write a novel about nothing. The characters babble on endlessly speculating about and explaining the most inane rationalizations that are all meaningless and boring. Not sure why the book doesn't have an ending, whether Kafka died in the midst of writing the novel or just got bored with all the meaningless dialogue and stopped at the end of a sentence. The audio file does include a summation that explains Kafka had planned for his protagonist to die of exhaustion. Thankfully this listener was spared.

only if my friend wanted to be able to say "I've read Kafka" which is exactly why I finished this nonsensical book. If you like reading/listening to people argue the same point from 3-4 different positions with each other for no reason other than to hear themselves think then this is your book.

Would you recommend The Castle to your friends? Why or why not?

Which character – as performed by Allan Corduner – was your favorite?

if it were 100 degrees outside and I didn't have air conditioning and I needed a place to take a nap I would buy a ticket to the show and have a nice cool nap.

waste your credit if you want to