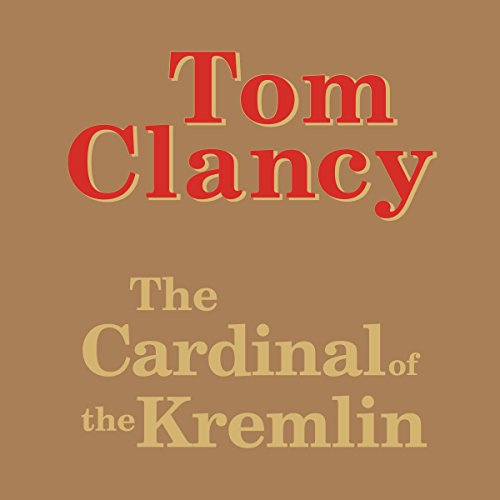 The Cardinal of the Kremlin

One of them is Cardinal -- America's highest agent in the Kremlin -- and he's about to be terminated by the KGB.

The other one is the American who can save Cardinal and lead the world to the brink of peace . . . or war.

Here is author Tom Clancy's heart-stopping masterpiece -- a riveting novel about one of the most intriguing issues of our time.

Please let Scott Brock narrate all of these

Listening to this guy narrate is like reading a story with no punctuation. Can only listen to 30 min at a time without falling asleep. Scott Brick needs to do all of the Jack Ryan books
Michael Prichard needs to go away

The most under rated book of the Jack Ryan series

Since the first time I read this book years ago I've been intrigued by this story. Why this book hasn't received the attention that several of the other books in this series have received is a mystery to me. I find it interesting that some of the people reviewing this book (and other books as well) find so much to criticize in the narrator while others heap high praise on the same narrator. Personally I think there could have been a few better choices for narrator than Michael Prichard, but unlike some others that reviewed this book I won't say that Prichard ruined it. Espionage is one of the themes that run all the way through this series and is a more important aspect in some of these books than others but this is the one with the strongest 007 type theme. Overall I highly rate this book and recommend it highly.

Previous Reviewers Are Spot On

The reviews on this book are a mixed bag...and each is right in their own way. Prichard does a lackluster job of general narration, yet his dialog scenes are quite good. The story is very slow to develop, yet there are spots of fast and interesting developments. This book is not for you if you need fast, punchy action with crisp dialog. However if you are a fan of well crafted intrigue with political twists and turns -- then indeed you'll enjoy this book. If I weren't such a big fan of the Ryan series overall I probably would have given even fewer ratings stars.

Loyalty to a Traitor

To continue from Hunt for the Red October, this book is about someone who was hinted to before, a CIA source so valuable in the USSR that his information is DELTA class important and only five people know who he is, Code name Cardinal. when the Russians make a break through in laser technology he is asked to look into it.

Ryan is back, and this time he is part of the US, USSR nuclear arms talks. and travels back and forth with the ambassador and his team to give his CIA analyst still to his country.

When the Cardinal chain breaks down with some important information the CIA want on lasers and that the KGB get a hint that there is a spy with highly top secret information being leaked they unleash the whole team to find out who it could be.

what will happen when the game between the CIA and the KGB are fought over one man. can the CIA get what they need and get there man out. or will the KGB find out who he is before the CIA gets what is needed?

Like Hunt for Red October, The Cardinal of the Kremlin has multiple view points and is fun to keep track of, but instead of three we now have nine different major aspects (one is a husband wife team) with minor key players brought in as well. Clancy is a master of juggling two sides of the coin and being able to seamlessly bring everything together in a way that keeps you wondering how he did it. hints to actions are made without giving away how the end will come off. tricks and deceit are second nature as Clancy puts in surprise twists that make you wonder as to what is the end game. and yet as you try to figure out what is next you cant stop listening.

it is highly recommended to anyone who likes a good plot twist, CIA spy books, or just wants to enjoy a book set in modern times.

I've always thought that "Cardinal" was the most interesting of Clancy's Jack Ryan books. And in terms of the quality of the story, I enjoyed the unabridged version of this story even more than the abridgment that I bought many years ago. It felt like I was getting "bonus material" beyond the original version of the story that I knew. I've been waiting for a long time to see unabridged Audible versions of some of the Jack Ryan novels.


As far as the reading of the story was concerned, I was less impressed. Perhaps it's unfair to rate Michael Prichard's read when matched up against the masterful performance of the abridged version by David Ogden Stiers. Nonetheless, I did feel at times like the soul of this often-soulful story was drained in Prichard's read. In certain passages, such as the pivotal conversation between Felitov and his KGB interrogator, I sorely missed the intensity and well-defined character sense of David Ogden Stiers' performance of the dialog. Don't get me wrong-- Prichard is a fine reader of nonfiction. But a book like "Cardinal" loses a lot when it is read like the evening news instead of the emotional human drama that it is.

What did you love best about The Cardinal of the Kremlin?

It's a little slower than the typical Clancy, with more character development and less shoot'em'up, but I liked it a lot.

The narrator was annoying to the point of almost intolerability at first, but I got used to it later, particularly as I got more engaged in the story. A different narrator would have been better.

Tom Clancy is one of a kind.

It's been about 15 years since I picked up a Clancy novel. I never read the Jack Ryan series because the movies spoiled them for me. I was pleased to find this unmolested book so early in the series, and thought it would be a good place to start. I was right.

Tom Clancy is not easy to get into. His stories are ... well ... verbose. His knowledge, research, and imagination combine to make extremely interesting and technically detailed stories that have no equal that I've ever heard of. His plots are intricate and huge. Disparate threads are interwoven throughout his novels, and only reveal their pattern in the third act. That means you need to invest a lot of time learning about seemingly inconsequential things before the payoff reveals itself. It's easy to stall out.

I'm giving this story 4 of 5 stars because it was a worthwhile read, and had a satisfying payoff... but it could have used an editor, could have used more Jack Ryan, and could have had a more exciting climax.

It wasn't great, but it was a unique read, and just listening to Clancy get technical about military and intelligence matters is just something you can't find anywhere else.

3 of 5 stars for narration because throughout the book there are jarring production problems where entire passages were clumsily edited in during post-production, with significant volume and tone differences that rip you right out of the story.

I liked the psychology of some the characters, especially The Cardinal. The story was really big on peoples actions due to their psychology.

It dissapointed me that it was about the spy game but it never felt very tense or clutch. Not a true fault. It felt very realistic and professional. It just never felt dire. Clancy's books always feel dire.

Just a "Hmmm". The story wasn't sewn interestingly enough or tightly enough for that WOW or breathless moment you normally get during or at the end of a Clancy book. Again. Not true flaw. But because it was about Spys, i wanted more spy stuff and less... psychological case study.

Flat. For this book he didnt really grab me.
Appropriate. His voice fit the mood but his enthusiasm didnt.
Poor. For voices and accents.

Only because i "read" the book.

This was good but i was looking forward to a spy thriller with Clancy's attention to detail and verbosity. The story being told simply wasn't that. It felt more like a psychological case study. Very cause and effect. It just wasn't a ride for me(Like Clancy usually is). Minus a few points, i just didnt feel like i was suppose to care much for what was going on.

Good story but too slow

This was a very good story concept, but it took several hours for me to get into it. The pace is just too slow. It had it's riveting moments in the 2nd and 3rd parts, but it just didn't do for me what "Without Remorse" did.

What made the experience of listening to The Cardinal of the Kremlin the most enjoyable?

Although the Cold War is over the depth, breadth and technical details associated with this novel make for an entertaining listen that requires the listener to engage themselves mentally in order to manage all the various story lines right through to the fast paced climax.

Jack Ryan is my obvious choice for favorite character. He brings a clarity and perspective to a world that can otherwise get lost in the details while simultaneously expanding his own comfort zone

Have you listened to any of Michael Prichard’s other performances before? How does this one compare?

Story is great, but "unabridged" is too lengthy

great story, complex plot - but would not recommend to go for the unabridged version - 30h is really long. but apart from that a full recommendation!