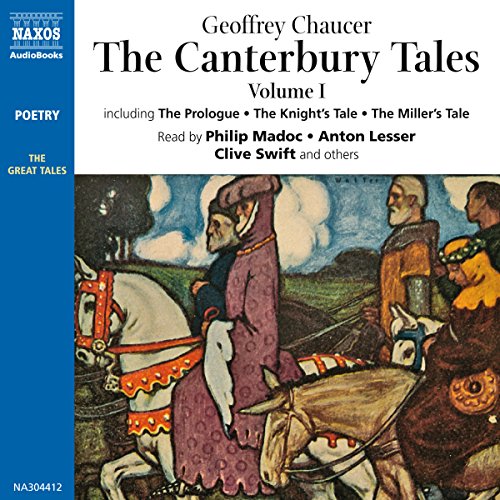 The five tales (not including the Prologue) of this production include a good mix of the stately and the satirical in Chaucer's masterpiece. Classical actor Edward de Souza delivers the "Knight's Tale" with appropriate nobility, while Anthony Donovan injects levity into the bawdy "Miller's Tale." In a similar pairing of opposites, the "Merchant's Tale" and the "Franklin's Tale" present contrasting views on marriage, though it might have been nice to include one of the tales narrated by women. Nonetheless, all six narrators are sensitive to the rhythm and rhyme of the translation, and the interludes of medieval music also add a splash of flavor.

Chaucer's greatest work, written towards the end of the fourteenth century, paints a brilliant picture of medieval life, society and values. The stories range from the romantic, courtly idealism of "The Knight's Tale" to the joyous bawdy of the Miller's; all are told with a freshness and vigor in this modern verse translation that make them a delight to hear.