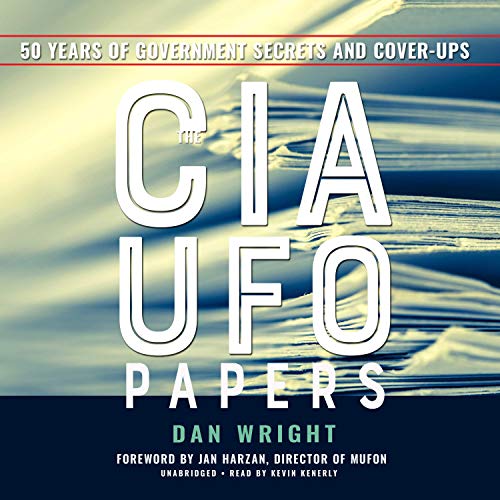 Here are the secret CIA papers that prove that the government has been tracking UFOs and extraterrestrials for over 50 years.

In autumn 2016, the CIA sent to its website a cache of electronic files previously released under the Freedom of Information Act but housed at the National Archives. Among a variety of subjects were "unidentified flying objects." Finally, a stockpile of reports and correspondences were available for serious UFO researchers to examine at home.

This book consists of selections from those secret files. Dan Wright spent 18 months selecting, editing, and organizing the 550 files that are relevant to UFO research and has produced a chronological collection of CIA documents spanning 1949 to 2000.

Each chapter focuses on a particular year. The summary of documents for each year is followed by a section called "While You Were Away from Your Desk", which provides historical and cultural context for the document summaries and examines other sightings and contacts that are not mentioned in the CIA files.

Among the fascinating tidbits are:

A memo to J. Edgar Hoover about flying saucer reports and The 1949 conference at Los Alamos that included Edward Teller, upper atmosphere physicist Dr. Joseph Kaplan, and other renowned scientists in which the participants debated whether recent incidents were natural phenomena or UFO sightings.

This is a must-listen for those fascinated by the history of UFO sightings and those interested in government secrets and cover-ups.

Unexpected surprise, as no reviews existed yet. Excellent book!

A really strong new entry in the UFO book realm. I liked the structure of this, the ways in which big stories and small were treated fairly and the level of detail provided for each report. Many of the best known cases are described but the book puts cases in larger context. Since it is told chronologically the reader gets a sense of what years and locations were busy, and why. Strong performance by the narrator too, making this a very good addition to anybody’s UFO/UAP nonfiction collection. Strongly recommended.

Excellent read (or listen) extremely interesting material, one if the best UFO books I have read.
The other being “UFOs: Generals, Pilots, and Government Officials Go on the Record
Book by Leslie Kean”

The title is literal

Really this is just recounting a list of papers. You may have time to listen to it, but I didn’t and gave up around 1/3 of the way through.

There is no further investigation or elaboration beyond what is sometimes only a couple of sentences on each entry. Perhaps I expected too much.

If you have a serious interest in the subject buy a paper copy and keep on your bookshelf. Tremendous reference work. Exceptional summary of what must have been thousands of pages of CIA Documents. But who could possibly listen all the way through this reading of the “phone book.” It is organized chronologically; I made it to 1958. The narrator deserves an award for keeping me on the hook that long … excellent narration. Story? There was no story unless you think there’s a story hidden in reading the alphabetized names in a phone book.

While human beings are preoccupied with superhero films and shows we have a trove of evidence indicating extraterrestrial beings frequently visit us. Thanks to the author for giving the world the undeniable truth.

If you are looking for a list of documenteted ufo cases and relevant data this is your book.

I was rather disappointed after researching alot of the declassiyied papaers to learn that he published this weak stuff.

A wealth of information of the UFO phenomonon

The Truth Is Out There

While the history and overall topic is fascinating, 12 hours of summarizes government reports can be a bit taxing for a listener.