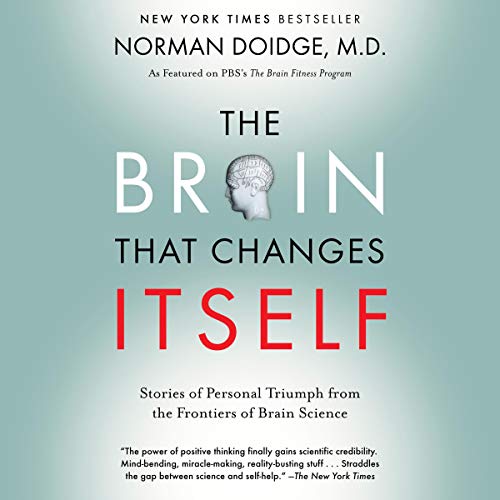 The Brain That Changes Itself

An astonishing new science called neuroplasticity is overthrowing the centuries-old notion that the human brain is immutable. Psychiatrist and psychoanalyst Norman Doidge, MD, traveled the country to meet both the brilliant scientists championing neuroplasticity and the people whose lives they've transformed - people whose mental limitations or brain damage were seen as unalterable. We see a woman born with half a brain that rewired itself to work as a whole, blind people who learn to see, learning disorders cured, IQs raised, aging brains rejuvenated, stroke patients learning to speak, children with cerebral palsy learning to move with more grace, depression and anxiety disorders successfully treated, and lifelong character traits changed.

Using these marvelous stories to probe mysteries of the body, emotion, love, sex, culture, and education, Dr. Doidge has written an immensely moving, inspiring book that will permanently alter the way we look at our brains, human nature, and human potential.

"Brilliant.... Doidge has identified a tidal shift in basic science....The implications are monumental." (The London Times)

"Fascinating. Doidge's book is a remarkable and hopeful portrait of the endless adaptability of the human brain." (Oliver Sacks, MD)

This is a wonderful and informative book about Nero-Plasticity. The history of the conflict of accepting this idea on the Fields of Psychology and Neurology. I will admit that some of the Topics extrapolated are way above my understanding but overall a great Listen. I definitely plan on giving this a another listen once some time has passed. I highly recommend.

This books has provided so many insights and ideas regarding the human brain and mind! Definitely worth the time!

Since starting this book, I've recommend it to at least 10 people. A well-written non-fiction that anyone can appreciate. This book conveys MANY examples of how the brain's plasticity relates to everyday life. You'll understand your brain and thoughts better after you read this. DEFINITELY worth the read.

I loved this book. Norman Doidge wrote about the plastic brain and many of the scientists and patients who worked to no only understand the brain and its plasticity, but also to help those who may most benefit and gain (or re-gain) sensory input from their brain rewiring itself.
Jim Bond’s performance was also great. His inflections and usage is posted due f

Learn about the amazing brain!

This is a fascinating book about the power of the brain and natural ways of healing that we hear so little about. I highly recommend!

This book helps all people understand how to reside the brain, not just ones w brain traumas

Neuroplasticity - a must read

I loved both the narrator and the author. It is a must read for everyone in the field of rehabilitation, it is a start to be open minded and see the possibilities we did not think they exist.

Doidge, MD provided a balanced view between the perfectibility and progress of human nature. I especially enjoyed chapter nine on Turning Our Ghosts into Ancestors which combines the work of Eric Kandel with the psychoanalytic work of Sigmund Freud into a story emphasizing the brain’s capacity for neuroplasticity. Thoroughly enjoyable listening experienced made possible by a great narrator.

I think this book will help everyone suffering from a traumatic or acquired brain injury or anyone who is caring for someone who has.

It is eye-opening and astounding.

💫It will take you out of your comfort zone of what you think you know and transport you to a place of hope and possibility for even the worst and most damage brain!

Love the book, very rich and easy to understand. sheds light on the power of the brain and endless possibilities to evolve