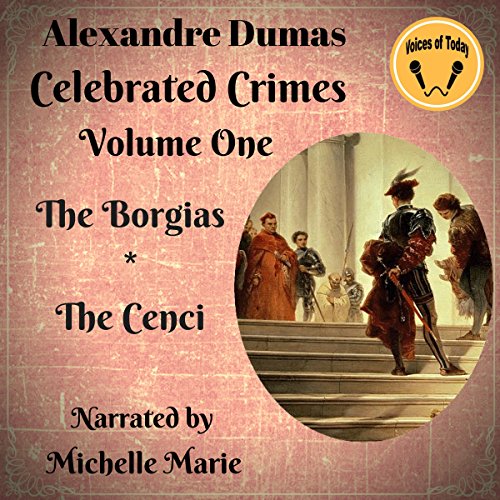 The Borgias and the Cenci

The prolific Alexandre Dumas, père, launched his writing career as a playwright and produced his first play in 1829. The success it and subsequent plays enjoyed enabled him to focus his efforts full-time on writing, and his interests grew to include novels (including The Three Musketeers and The Count of Monte Cristo) and travel books, as well as the popular Celebrated Crimes series presented here.

The eight-volume series was published in Paris in 1839-40 and contains 18 stories. The book met with instant success and had, as noted in the Introduction, “the added value of giving the modern reader a clear picture of the state of semi-lawlessness which existed in Europe, during the middle ages.” Dumas relates the intrigues of the Borgias and the Cenci; the bloody decades of conflict between the Catholic and Huguenot factions of France; the tragic tale of Mary Queen of Scots; the fates of Urbain Grandier, Karl-Ludwig Sand and Nisida; the ruthless Antoine Derue; the crimes of Marie Leroux and her co-criminal Claude Perregaud; the fascinating legend of "Man in the Iron Mask", Joan of Naples and Martin Guerre; the Marquise de Ganges; the bold and beautiful Marquise de Brinvilliers, poisoner; Turkish tyrant Ali Pacha, the Countess of St-Geran, the calculating Vaninka, and Napoleon’s Admiral Joachim Murat.

This volume relates the stories of the Borgias and the Cenci. The former, a family of Spanish adventurers, came to dominate the Italian peninsula, and, when Rodergio Borgia became Pope Alexander VI, the world of Christendom, in the late 15th century. The Cenci was an aristocratic family, in which rampant sexual and domestic abuse led to murder and very public execution.

Listen to a sample before purchasing

Dramatic moments are lost in the reader's overly cheerful narration. I almost returned the audiobook but decided to endure it as a loyal Dumas fan.

I liked this book. was a little harder to keep going at some plot point but over all good listen. hope to start vol 2 soon

The story is a classic... The Author a Master... but written in the vernacular of the times... Many run-on sentences that can make some parts difficult to follow and fully appreciate and even dull... That made it difficult for the performance of the Narrator. I am a Nerd for the old stuff and History in general... So I did enjoy it... This book was provided free of charge in exchange for a fair review. Thank You!

If you are a person who enjoys history, then this will not disappoint you. Alexandre Dumas wrote this during this and several other volumes between 1839-40! Thank you to those who translated this and gave us an insight into how the world was back then.