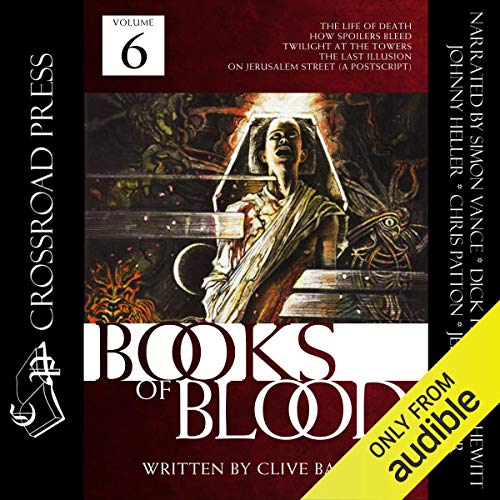 The Books of Blood: Volume 6

"Everybody is a book of blood; wherever we're opened, we're red." - Clive Barker

Few authors can claim to have marked a genre so thoroughly and personally that their words have leaked into every aspect of modern pop culture. Clive Barker is such an author, and the Books of Blood marked his debut - his coming out to the world - in brilliant, unforgettable fashion. Crossroad Press is proud to present Clive Barker's Books of Blood in digital for the first time.

The Books of Blood combine the ordinary with the extraordinary while radiating the eroticism that has become Barker's signature. Weaving tales of the everyday world transformed into an unrecognizable place, where reason no longer exists and logic ceases to explain the workings of the universe, Clive Barker provides the stuff of nightmares in packages too tantalizing to resist.

Never one to shy away from the unimaginable or the unspeakable, Clive Barker breathes life into our deepest, darkest nightmares, creating visions that are at once terrifying, tender, and witty. The Books of Blood confirm what horror fans everywhere have known for a long time: We will be hearing from Clive Barker for many years to come.

In this, the sixth and final volume of Clive Barker's Books of Blood, with a new introduction by Mark Miller, five new stories of darkness unleashed:

“The Life Of Death” - Hidden in the crypt of a derelict church she found Decay and Corruption in hits terrible glory. But such glamour can prove infectious....

“How Spoilers Bleed” - They committed a crime no jury could convict them for. But there were other judges...other punishments...

“Twilight At The Towers” - Ballard was the perfect spy. A man with all the cunning of an animal. Or was it vice-versa?

“The Last Illusion” - (A Harry D'Amour novella) - New York had shown Harry horrors enough for a dozen lifetimes. He thought he'd seen the worst that flesh could suffer. Then the beautiful widow walked into his life, with a husband who wouldn't lie down dead, and all Hell on her hells. And suddenly Harry was face to face with forces that could teach Manhattan a lesson in depravity.

“On Jerusalem Street” (a Postscript) - After the end, a new beginning: Walking the highway of the dead...

“A visionary, fantasist, poet and painter, Clive Barker has expanded the reaches of human imagination as a novelist, director, screenwriter and dramatist. An inveterate seeker who traverses myriad styles with ease, Barker has left his indelible artistic mark on a range of projects that reflect his creative grasp of contemporary media-from familiar literary terrain to the progressive vision of his Seraphim production company. His 1998 Gods and Monsters, which he executive produced, garnered three Academy Award nominations and an Oscar for Best Adapted Screenplay. The following year, Barker joined the ranks of such illustrious authors as Gabriel Garcia Marquez, Annie Dillard and Aldous Huxley when his collection of literary works was inducted into the Perennial line at HarperCollins, who then published The Essential Clive Barker, a 700-page anthology with an introduction by Armistead Maupin.

Barker's literary works include such best-selling fantasies as Weaveworld, Imajica, and Everville, the children's novel The Thief of Always, Sacrament, Galilee and Coldheart Canyon. The first of his quintet of children's books, Abarat, was published in October 2002 to resounding critical acclaim, followed by Abarat II: Days of Magic, Nights of War and Arabat III: Absolute Midnight; Barker is currently completing the fourth in the series. As an artist, Barker frequently turns to the canvas to fuel his imagination with hugely successful exhibitions across America. His neo-expressionist paintings have been showcased in two large format books, Clive Barker, Illustrator, volumes I & II.”

Would you listen to The Books of Blood: Volume 6 again? Why?

Absolutely! The stories were fantastic! The narration was excellent.

Wow! Where to begin? The reveal in "The Life of Death" was amazing! The twist in "The Last Illusion" was brilliantly executed!

The range of emotions and characters was so distinct!

The reveal in "The Life of Death".

I would definitely listen again!

This is a good end of the "Books of blood" series. Not perfect, bet better then 3,4 and 5. Narration is as always well done. Nothing to complain about.