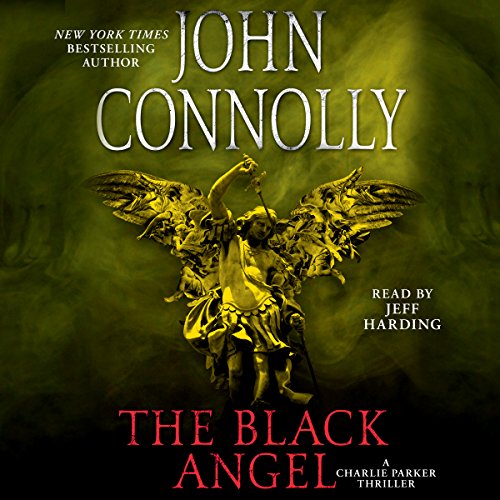 To those who have been forsaken, hell has no geography.

The Black Angel begins with the disappearance of a young prostitute from one of New York City's seamiest neighborhoods. Like so many tormented souls before her, the girl's mother is inevitably drawn to Charlie Parker's doorstep desperate for redemption and revenge. Despite the danger that his chosen profession imposes on his wife and newborn daughter, Parker knows that the woman and her troubles cannot be ignored. As always, he is driven as much by the evil that simmers in the hidden honeycomb world as he is by the ties of friendship and blood.

As Parker gets closer to the girl's captors, he discovers that her disappearance is linked to a church of bones in Eastern Europe, to the slaughter at a French monastery in 1944, and to the myth of an object known as the Black Angel - an object considered by evil men to be beyond priceless. But the Black Angel is not a legend. It is real. It lives. It dreams. And the mystery of its existence may contain the secret of Parker's own origins.

I am so glad that this was narrated by Jeff Harding. so much better. However regardless who reads narrates, You lose yourself in the adventure. Of course there are parts that seem to drag but only for a moment and it all evolves and ties in. Just a great series. Well worth the time. If you have not read The Charlie Parker thrillers You can pick up and read in any order but I recommend beginning at The first in the series. Just as each story evolves Charlie, Angel and Louis all evolve. Plus in this you book you get more of Louis back story. As usual Angel provides the humor that plays off Louis and Charlie's sarcastic whit. Another must read!

lost interest. too much religious background that was an interesting. did manage to hang in to the Finish but did not like the story

Love this series, John Connelly
is a fantastic author, I enjoyed the the narrator and the continued development of the characters

Dark, as are all the Charlie Parker stories. but behind to introduce the complex characters that haunt him.

Thinking this is the last one for me

This book was a very long walk in a very big circle that finalized in a I am not sure what I just listened too ending.
Somewhere in this great detective series Connolly decided it needed a slight supernatural tint.. okay. I can deal with a bit of maybe could happen that way ... it ended up in full blown , out in left field , supernatural wannabe rambling.
Just not great. The narrator who they brought back is really great and made book tolerable as background noise to not return.
I will not be going further with this series ..

I'm hooked with this story!

Not particularly a fan of the supernatural and the angels vs demons turn is taking the story, but I like how the events of the previous books are still part of the chain. Jeff Harding is a voice is really great of this character

having read the stories already Jeff Harding's voice brings a deepiness to them that is just wonderful to experiance.

loved the book it helped clear up some questions in the series . Great narration

I love audible and I love Charlie Parker books but honestly if there all narrated by Jeff Harding I won't be purchasing them. His voice is just dry no emotion and his voice just doesn't fit the story.

I am so glad I didn't read this book. I am also glad that Jeff Hardy is narrating the book. I don't know how much what is in this book is because of research or because John Connolly has a demented imagination. I do know that this book went deeper than the previous book. By the way, one of the books is missing from audible.com. This is a disturbingly good book.