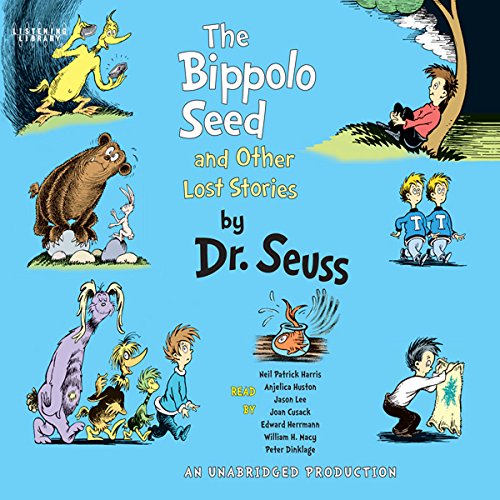 The Bippolo Seed and Other Lost Stories

It's the literary equivalent of buried treasure! The audiobook edition features a cast of celebrity narrators who will bring these stories to life. Readers include:

Seuss scholar/collector Charles D. Cohen has hunted down seven rarely seen stories by Dr. Seuss. Originally published in magazines between 1950 and 1951, they include "The Rabbit, the Bear, and the Zinniga-Zanniga" (about a rabbit who is saved from a bear with a single eyelash!); "Gustav the Goldfish" (an early, rhymed version of the Beginner Book A Fish Out of Water); "Tadd and Todd" (a tale passed down via photocopy to generations of twins); "Steak for Supper" (about fantastic creatures who follow a boy home in anticipation of a steak dinner); "The Bippolo Seed" (in which a scheming feline leads an innocent duck to make a bad decision); "The Strange Shirt Spot" (the inspiration for the bathtub-ring scene in The Cat in the Hat Comes Back); and "The Great Henry McBride" (about a boy whose far-flung career fantasies are only bested by those of the real Dr. Seuss himself).

In an introduction to the collection, Cohen explains the significance these seven stories have, not only as lost treasures, but as transitional stories in Dr. Seuss's career. This is a collection of stories that no Seuss fan (whether scholar or second-grader) will want to miss!

my kids love it!

so much fun to listen to! Narrators are great!
histories are fun ,we love it.

So hard to read is The Bippolo Seed

For the most part the reading is very good, but there are a number of times where the intended cadence is broken due to the odd mid-sentence changes in what was intended. These changes, to me, are one of the unusual and interesting features of Dr. Seuss's writing, so I was disappointed to hear them missed at times.

It may not bother most people though, and despite that issue I still give it a high overall performance score.

...a PDF of the images from the book would be nice though!

Read with perfection. I loved these stories! Great morals in ever single one. Perfect for the entire family

Chapters are not Titled.

What would it take to put the book titles for each chapter. It would make it easier to find the story my child wants.

The Bippolo Seed and Other Lost Stories

I was so excited when I saw that there were new stories out there that I got the audiobook from Audible. (The different celebrity narrators didn't hurt either.)

The stories had all the elements you came to expect in a Dr. Seuss story. The delightful rhymes, the peculiar situations, the strange animals, and the wonderful endings.

The commentary by the "finder" of the stories was also a treat. His description of what educators thought about how children learn words was so ludicrous I found it hard to think anyone felt that way.