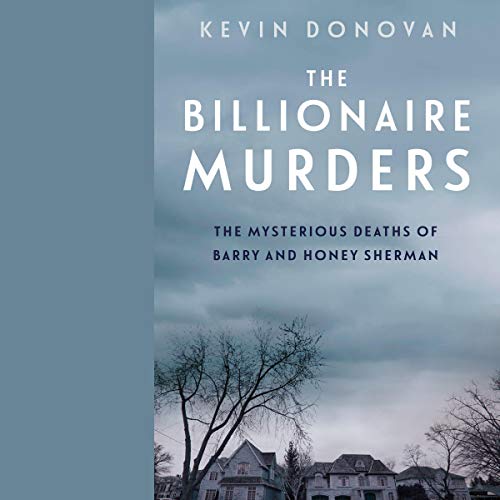 A top journalist crosses the yellow tape to investigate a shocking high-society crime.

Billionaires, philanthropists, socialites...victims. Barry and Honey Sherman appeared to lead charmed lives. But the world was shocked in late 2017 when their bodies were found in a bizarre tableau in their elegant Toronto home. First described as murder-suicide - belts looped around their necks, they were found seated beside their basement swimming pool - police later ruled it a staged, targeted double murder. Nothing about the case made sense to friends of the founder of one of the world’s largest generic pharmaceutical firms and his wife, a powerhouse in Canada’s charity world. Together, their wealth has been estimated at well over $4.7 billion.

There was another side to the story. A strategic genius who built a large generic drug company - Apotex Inc. - Barry Sherman was a self-described workaholic, renowned risk-taker, and disruptor during his 50-year career. Regarded as a generous friend by many, Sherman was also feared by others. He was criticized for stifling academic freedom and using the courts to win at all costs. Upset with building issues at his mansion, he sued and recouped millions from tradespeople. At the time of his death, Sherman had just won a decades-old legal case involving four cousins who wanted 20 percent of his fortune.

Toronto Star investigative journalist Kevin Donovan chronicles the unsettling story from the beginning, interviewing family members, friends, and colleagues, and sheds new light on the Shermans’ lives and the disturbing double murder. Deeply researched and authoritative, The Billionaire Murders is a compulsively listenable tale of a strange and perplexing crime.

This is not a book about a murder investigation. It's a book about the generic pharmaceutical industry. It just drones on and on. Kept waiting on something to happen. I finally gave up. Could not finish.

Well researched, written and narrated. While the murders remain a mystery, the author does raise some suspicion upon Honey and Barry’s close inner circle.

I don’t agree with other reviewers who posit that much of the text is devoted to telling a history of Barry’s Sherman’s pharmaceutical company, Apotex Inc. Providing a brief background isn’t reason enough to dismiss the book entirely.

Story telling is not so intriguing. Some facts given but not really in a concurrent manner that keeps you interested.

I wanted to like this book given the good reviews. I listen to a lot of true crime and was bored to tears by this, even though I sat through the whole thing. This book goes on the supposition that because two billionaires were murdered that they are immediately interesting. They're not. This couple was impressively boring. There was no juiciness here at all. And the author seemed to insert himself into the story in a weird way that was...journalistic hubris. Hard skip. I recommend anything by Jerry Bledsoe or Fatal Vision by Joe McGinnis if you want a real success + weirdness + murder story.

Performance: One of the mysteries of this book is the one where authors think they can read their own books for the audible community. As writers and therefore artists, they ought to understand that narrating books is a distinct and specific skill and if they have no such skill or talent, they should immediately put that thought out of their minds. Alas, this author failed to do that and the resulting narration is poor. The cadence and enunciation of words and sentences is quite annoying. Even Torontonians (of which I am one) will not appreciate the repeated, grating "Tronno" (for Toronto) throughout the book as well as other mispronunciations. I found the reading to be very poor indeed, but not so awful that I needed to stop listening.
Story: The story was obviously very well researched and Mr. Donovan has assembled it in a relatively logical way. The writing is fairly utilitarian with many descriptions of events. Where the writing improves is in his thoughtful characterizations of how the Shermans lived, interacted with family and friends and business associates and, through interviews and observations, what seemed to be in their minds. A frustrating story because (in my view) of police incompetence but a long needed exposure of the facts as available. Mr. Donovan brings some light to a very dark tragedy.

I was interested in this because of the fascinating circumstances of the murder, but despite having “murder” in the title this reads more as a biography than anything else. If you want to read a biography of Barry Sherman (who, were it not for his murder, you would almost certainly not be aware of) this will be of great interest. If you like true crime, avoid it.

I Was So Excited About This Book

If you want a murder mystery this isn’t it. Author spends the whole book talking about how rich but frugal the couple was. Ok, we get it, they didn’t like to spend money! And hours about the prescription drug business. Then he ends by making an obvious guess about the murders. Hours if my life I’ll never get back.

Highly recommended if you’re looking for a real thriller where you get to know all parties involved. Provides just enough background info