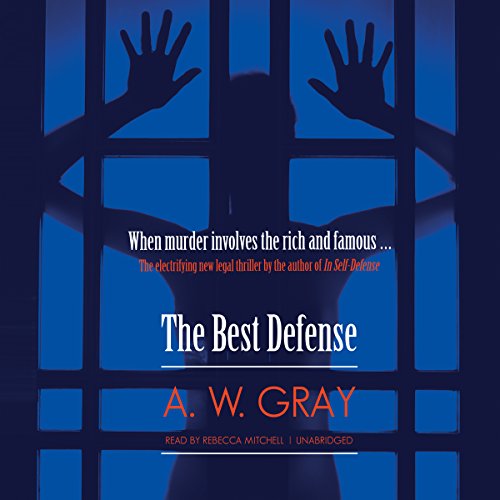 At a gala event in downtown Dallas, lawyer Sharon Hays runs into an old friend turned Hollywood star who is in town promoting her most recent film with her current lover - a Hollywood bad boy. But when a brutally murdered corpse is discovered in her posh hotel suite, the starlet finds herself accused of the crime.

Sharon is all too eager to take up her friend's defense, but the facts of what happened that night in the hotel room are far from clear. Sharon's friend claims she never went back to the room, and her lover had supposedly blacked out. Soon Sharon finds herself in the media spotlight defending America's sweetheart.

Nice, but not memorable

The story takes almost until the last third to gather some speed, the plot is fine though not extraordinary. The whole novel might probably have been condensed to half the length. This is a detective story (legal 'thriller' would be too much, there is nothing thrilling here) that works fine if you have something else to do (ironing?) and want to be entertained a little at the same time. On the whole totally average, as is my three star evaluation of this book.

AW Gray is largely unknown, but he is the best!

I have listenef to all 4 of the Bino series and several of his stand alone books at least twice. But for some reason I never listened to or read any of his Sharon Hayes novels. Well now I have and having done so, I put his works above all others here in the states, including Michael Connelly and James Lee Burke. They are unique, witty, and feature incredibly charasmatic characters.

Sharon Hayes, once an aspiring actress on Broadway, is now a small time criminal attorney in Dallas. She has a 13 year old daughter from a short romance with another aspiring actor. The child's father, once totally absent from her life, is now forced by his fame as a TV actor to pay child support. Not because he cares for his daughter's well being, but for the sake of the good publicity his financial support provides for his career. She has one more past relationship from her acting career, her ex roommate and best friend turned superstar, Darla Cohen.

When Darla's husband is found murdered in a Dallas hotel, immediate suspension is cast on Darla. As her friend, Sharon agrees to help her find suitable counsel. But Hollywood's idea of good legal representation is a far cry from what Sharon knows she will need. Legal manuvers, media pressures and a real murder mystery make for hugely entertaining tale.

I believe I stumbled into Mr. Gray's Bino series while searching for novels narrated by the great George Wilson. Rebecca Mitchell reads this one and does a wonderful job with it.

Do yourself a favor and buy this book!

I enjoyed this book more than I expected to from reading other reviews. I enjoy legal thrillers and this one kept my interest all the way through. Living in Dallas I could relate to some of the areas mentioned though a large part of the book took place in Los Angeles. I think I will try another book by this author. The story took place in 1996 so I had to keep that in mind while I was listening.