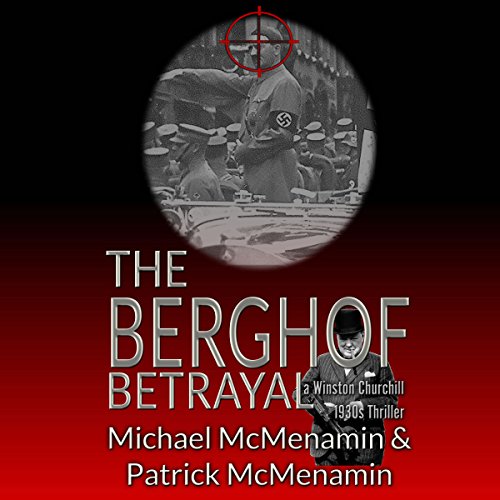 Winston Churchill receives startling news from a German aristocrat in early 1933 after Adolf Hitler is appointed Chancellor of Germany. The aristocrat has learned of a plot to stage a fake assassination attempt on the new German leader that the Nazis will use as a pretext to declare martial law and liquidate their political opponents. Unknown to Hitler, however, his enemies within the Nazi party - the Black Front - are conspiring with renegade elements of his own SS to turn the fake assassination attempt into a real one.

Churchill tells the American newspaper titan, William Randolph Hearst, of the fake plot, and together, they persuade Mattie McGary, Hearst's top photojournalist and Churchill's adventure-seeking Scottish goddaughter, to investigate. Mattie readily agrees, in large part because exposing the fake plot may help her finally shed the unfortunate reputation she has in Germany as "Hitler's favorite foreign journalist".

Soon after she leaves for Germany, Mattie's fiancé, the American lawyer and former MID agent, Bourke Cockran, Jr., also travels to Germany to help his publisher client, Freedom House, acquire the rights to Rear Area Pig, an expose of Hitler's less-than-heroic wartime service. Once in Germany, both Mattie and Cockran find themselves in peril at the hands of the SS loyal to Hitler who will stop at nothing to keep Cockran from acquiring the book and Mattie from learning the truth about the fake plot.

Threats to Mattie multiply when SS agents working for the Black Front attempt to coerce her into joining the real plot to kill Hitler. When Cockran learns the Black Front intends to kill Mattie along with Hitler at his alpine retreat, the Berghof, he reluctantly seeks the help of Reichspresident Herman Göring and Kurt von Sturm, a top Göring aide who is also one of Mattie's former lovers. The one-time rivals for Mattie's affection quickly conclude that there is only one way to protect Mattie.

BETRAYED! NOT A GOOD BUY

IF YOU LIKE GUNS. REALLY IMPROBABLE PLOTS. AND FEMALE CHARACTERS OUT OF DICK TRACY COMICS, YOU MAY LIKE THIS BOOK. I PREFER EVEN MY FLUFF READING TO HAVE A BIT OF SUBSTANCE, WRITING THAT IS NOT DIDACTIC, AND CONSISTENCY IN CHARACTERS. ALSO A FEW TECHNICAL DIFFICULTIES WITH THE VOLUME MADE LISTENING TO IT ANNOYING AT TIMES.

MAIN CHARACTERS ARE SUPPOSED TO BE GETTING MARRIED BUT --SEPARATELY-- THEY JET AROUND 1933 GERMANY & US AND SPOTS IN BETWEEN. BEGGARS BELIEF.

THEN THE GUNS-- SEEMED LIKE EVERYONE WAS SPOUTING DETAILS FROM A GUN SHOW CATALOGUE. NOT NECESSARY. EQUALLY UNNECESSARY WAS THE MAJOR EVIL NAZI THREATENING FEMALE CHARACTER WITH RAPE EVERYTIME THEY MET. FRANKLY, HER BIG FINAL SHOW OF 'DON'T MESS WITH ME,' WHILE A NICE TOUCH, I IMMEDIATELY WONDERED WHERE ALL THAT SCOTTISH GRAWL HAD BEEN EARLIER.

I HAVE READ WILBUR SMITH AND KEN FOLLET AND MARK MILLS. I ENJOYED THEM.

IF YOU WANT A ROMP W/O MUCH PLAUSIBILITY THEN YOU MAY LIKE THIS SO-SO NOVEL. I DID NOT LIKE IT.