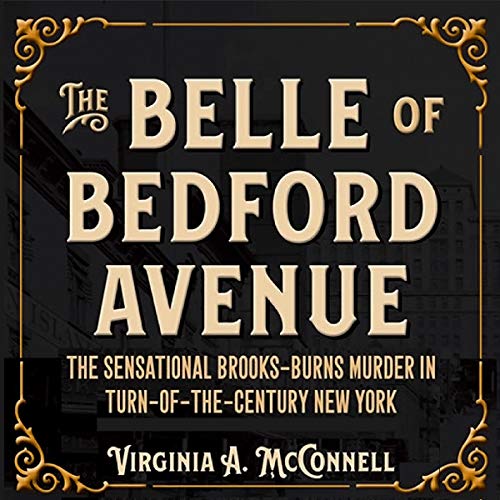 The Belle of Bedford Avenue

At the turn of the 20th century, many affluent Brooklyn teens and young adults were bucking the constraints of their immigrant parents and behaving badly: drinking, having sex, staying out all night, stealing, scamming local businesses, and engaging in other more serious activities.

When 20-year-old Walter Brooks was murdered in a seedy Manhattan hotel in 1902, the ensuing court case was front-page news throughout the country. The hearings featured testimonies about these young people’s secret lives that shocked parents and inspired much editorial commentary in the newspapers. From start to finish, the case was viewed as a cautionary tale for parents, for boys who could be led astray, and for girls who risked their reputations to be popular.

Set against the colorful backdrop of Coney Island, roadhouses, forbidden dance halls, and vaudeville, The Belle of Bedford Avenue follows the young woman at the heart of the case from her trial for the murder of Walter Brooks to her adulthood.

The crime itself, interestingly, occurred in the location of Ground Zero and today’s September 11 Memorial. The trial was conducted by William Travers Jerome, who went on to become a legendary New York City prosecutor.

A fascinating look back at a scandal of yesteryear

The key to enjoying “The Belle Of Bedford Avenue” is to NOT go into it expecting a by-the-numbers true crime tale of murder. Because the murder mentioned on the cover is the foot in the door to a slice of history more interesting than just the murder.
It’s the tale of a scandalous, cliquey group of affluent young adult children (both male and female) of well to do families around the beginning of the 20th century in New York, who devote all of their time to cons, delinquent hijinks, debauchery, and promiscuity. Along the way, a murder occurs, and the bulk of the book is focused on the before/during/after periods of that murder. The level of research into the time, the place, and the people involved - utilizing contemporary newspaper coverage and court records - are for me the real strength of the book. And as events progress, narrator Lee Ann Howlett keeps us interested, with a calm, yet engaging delivery.
If the book has a shortcoming, it is just in the fact that the life of the so-called “Belle” herself gets gradually less interesting, the older she gets. But I can’t bring myself to fault the book for that, considering it’s a true story.
I took this book more as an interesting bit of forgotten history, than as you typical true crime book. I very much enjoyed it, and I encourage you to listen to it - so long as you don’t go into it with too narrow a field of expectation.
Also, expect to dedicate some of your free time to trying to finding photographic or film documentation of the quirky, short-lived, very localized fad of “kangaroo walking” mentioned multiple times throughout the book. I myself am still looking.

This girl is scandalous!

The whole time I read this book I kept saying oh my goodness and I can’t believe she did that! This book starts off with the murder, but trust me when I say it gets even crazier. She doesn’t learn the lesson she doesn’t temper her attitude or actions. This is one of the best books I have ever read not to mention that it’s true completely true. If you think teams of today or out of control just know this book will teach you that teams have always been out of control. From Billy the kid to the crazy teen you know personally teenage is a crazy summer just crazier. You have to read this book if you like true crime and being a fly on the wall you’ll love this book. I did the narrator was great the writing was great the book was great!

I had never heard of the murder mentioned in the title of this book so when I was offered the chance to listen, I hopped on board. I quickly learned that the murder is very little in the information covered. There is a lot in this book about a group of kids from rich parents who were involved in shadier activities around the turn of the century. Definitely an interesting perspective, and I enjoyed learning what this audiobook had to teach. The details within this book considering the dates, people, and even headlines have been researched in depth.

Narration was well done, offering an easy to absorb delivery as the audiobook progressed.

this book was given to me at my request for review

I enjoyed listening to this book was the narrator did a good job. it all seemed real with the way the rich kids had their own gang and got away with all kinds of things.

The Brooks Burn murder, might have been a sensation in its day, but by today's standard it would barely make the headlines for one day. That said the book is extremely well written and researched, and paints the life picture of a true life girl gone "bad".
The story is a piece of little history that shows how life was in the early 1900 hundreds cor a young woman.
Narration by Lee Anne Howlett is both compassionate and concise in detail.
I received a free copy of this audio book at my own request and voluntarily leave this review.

I read....alot and when I'm not reading, I'm listening to a book because someone has to do the housework and I have chosen me because I want it done right. This story is based on an actual murder that happened 100 years ago. It must have been difficult to research because there were only newspapers to get information from. So I think some of this might have been conclusions that the author formed based on the information she had.

I said some things never change because of the people involved. They were young and came from wealthy families that apparently saw nothing wrong with their "boys' being rapists, extortionists, liars, cheats and just basically rotten people and one girl in particular was really someone not to mess with.

It took me a few days to listen to the whole book. I would listen for a while, get a little bored and come back to it and listen some more. I like the true crime books that take place in the late 1800's and early 1900's. There really wasn't too much difference between Brooks-Burns of that era and some of the uber wealthy of 2019.

I was given a free copy in exchange for a review. If you are a history and true crime person you may like it. To me, the book is okay and the narrator was pretty good. You may like it. Never know until you try.

Right up my alley.

I was given a copy of this audiobook at my request and am voluntarily leaving this review.

Turn of the century setting and true crime are 2 things I dig, so when I saw this title I immediately got interested.

The flow of the narrative was good. This is not a very well-documented case, and the author had to rely mainly on newspaper reports and editorials of that time, so it is understandable for her to base a lot on speculation.

The narration was also good. Her voice was clear and enunciation perfect and not distracting.

The Old is Forever New

An unsolved murder mystery from over 100 years ago can still be an engaging tale. Excellently researched and written by Virginia McConnell and expertly narrated by Lee Ann Howlett, "The Belle of Bedford Avenue" flies by.

This book was given to me for free at my request and I provided this review voluntarily.

The Belle of Bedford Avenue: The Sensational Books-Burns Murder in Turn-of-the-Century New York (True Crime History) was a good read by Virginia McConnell. During the turn of the 20th century, many Brooklyn teens and young adults started bucking the constraints of their immigrant parents. They would behave badly by; drinking, having sex, staying out all night, stealing, and scamming local businesses. Twenty year old Walter Brooks was murdered in 1902 in a Manhattan hotel. The case was front page news throughout the country. This book followed a young woman who is on trial for Walter Brooks murder. I enjoyed reading this book.

I just couldn't really get into this book. I'm not sure why. It was well written and I like period pieces
but this one didn't grab me.
I feel badly writing a so-so review because I was given it at no charge for an honest review. But that's
what this is.
Narration was excellent.
Thank you!