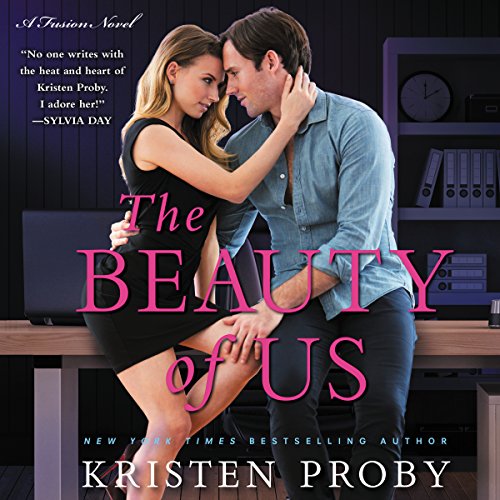 The Beauty of Us

Riley Gibson is over the moon at the prospect of having her restaurant, Seduction, on the Best Bites TV network. This could be the big break she's been waiting for. But the idea of having an in-house show on a regular basis is a whole other matter. Their lives would be turned upside down, and convincing Mia, her best friend and head chef of Seduction, that having cameras in her kitchen every day is a good idea is daunting. Still, Riley knows it's an opportunity she can't afford to pass on. And when she meets Trevor Cooper, the show's executive producer, she's stunned by their intense chemistry.

Trevor's sole intention is to persuade Riley to allow Best Bites TV to do a show on her restaurant. But when he walks into Riley's office, he stops dead in his tracks. The professional, aloof woman on the phone is incredibly beautiful and funny. But can he convince her that he's interested in Riley for himself? Or is he using the undeniable pull between them to persuade her to agree to his offer?

Ce que les auditeurs disent de The Beauty of Us

Not one of her best, but still worth the listen to hear Sebastian York's voice.

I fell in Love with Riley and Trevor

Kristen Proby has created a brilliant world in her Fusion series. It is about five friends who open a sexy restaurant in Portland, Oregon. Each one brings something of value to their business and I love learning about them all. Kristen Proby weaves her magic into this series by creating stand alone stories for each of the five main characters, while intricately merging the story lines throughout the entire series. I cannot get enough of these memorable characters. Kristen has found a way to burrow them deep into my heart an not let go.

In this story, you meet Riley Gibson and Trevor Cooper. Riley is the PR person for Seduction, the restaurant the girl's own. She has managed to get their restaurant featured on a food network. This will bring a lot of notoriety to their business as well as showcase what makes it so unique. What she doesn't expect is to meet and fall for the show's producer. He travels for a living and resides in Los Angeles. Riley's worst fear is that their geographical differences is a recipe for disaster.

This story is filled with humor, love and combustible chemistry. I could not put this story down. I absolutely fell in love with Riley and Trevor. I can't wait to see what Kristen Proby has in store for us next.

PS - The Audio version of this book only enhanced Kristen Proby's brilliance as an author. Sebastian York and Abby Craden brought the characters to life and kept me entertained completely. I would highly recommend any book read by either of these two talents.

I love how Riley is so laid back a carefree with the other girls. Her life is so much like most women these days. It’s so hard dating. Kristen has captured the funny but sexy side of a gamer. There is just so much I love about this book! But how she tells off his exit wife in the end is probably my favorite!!

Dialog started out funny but story ended up very sweet

Author is at her best when she writes witty dialog. The story was a nice simple love story but the hot scenes and clever conversation between the characters make it a cut above. Will miss this series because the female partnership is entertaining and encouraging.

I love Kristen Proby's books! The characters are always well written and the narrators, oh man the narrators. If I could just have Sebastian York's voice in my ear all the time. Dang, it is just manly and gruff and completely sexy. He really knows how to bring out the characters personalities.

I'm super excited for Mia's story especially for the bomb that she dropped in the epilogue.

This one was the best of them all so far! Trevor and Riley made me laugh out loud!

Great story! Looking forward to Mia's story as it sounds like it's going to be explosive!

It was fun and probably more relatable than most romance novels (granted it’s still a romance novel). The only ONLY thing I didn’t like was her voice for Kat in this book. I understand the limited range a human voice allows, but it was not my favorite representation. Normally I love these two narrators, they’re voices are sexy and enticing and make you WANT to keep listening. But in this novel it sounded as though Kat had a nasty cold the entire story.

Hit it outta the park!! Such an amazing aand gifted author!!!
Don't miss this book!

It's a Kristen Proby Novel...Awesome!!

I'm obsessed with this series and all of her books. This was sooo good. Riley and Trevor had the best meet cute moment and things moved quick in the most swoon worthy ways. Every aspect was adorable with this understanding couple. Alpha male and all successful business woman. I'll be reading this again and I can't wait for the next book with Mia