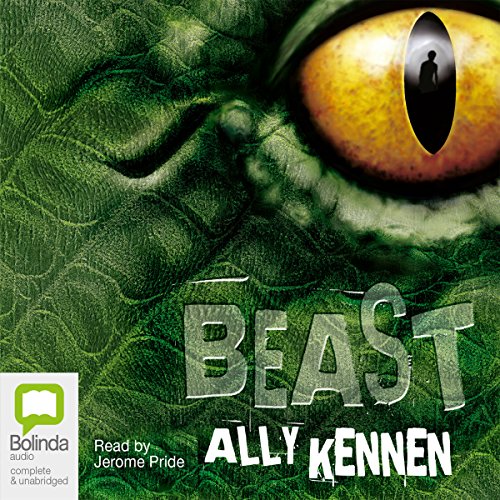 Teenaged Stephen begins his story with a list of all the crimes he's committed since he was a child, and narrator Jerome Pride embodies his distinct voice exquisitely. His Stephen is full of bravado and tough talk, but listeners will clearly see the wounded vulnerability underneath. Stephen, in and out of trouble all his life and currently in foster care, has been caring for a vicious crocodile he calls the Beast. Six years ago, the Beast was still small and manageable but now it's grown too large, and Stephen must decide what to do with this dangerous secret. Pride's thoughtful pacing maps out the physical and psychological perils that Stephen faces, guiding listeners to a startling and gratifying ending.

In the caged depths of an urban reservoir lives a monstrous creature. Its existence is unknown to anyone except the teenage boy who feeds it. Six years ago it was a vicious little baby, now it has grown enormous, and its rusting pen can't hold it much longer. Stephen has kept the Beast a secret against all the odds. He's got other painful secrets - like why he never sees his mother, or mentions his brother, Selby, and wishes his father was dead.

Stephen's life in foster care - always bad - is getting worse, and he's not a boy who plays by the rules. But his extraordinary efforts to free himself of the Beast make him a hero that readers will never forget. This thrilling teenage novel, which presents physical and psychological danger with masterful skill, and human relationships with warmth and wit, launches the career of an outstanding new writer.

Would Read again. Must read

Best book Ive read in a while really worth reading. Narrator fits the story .