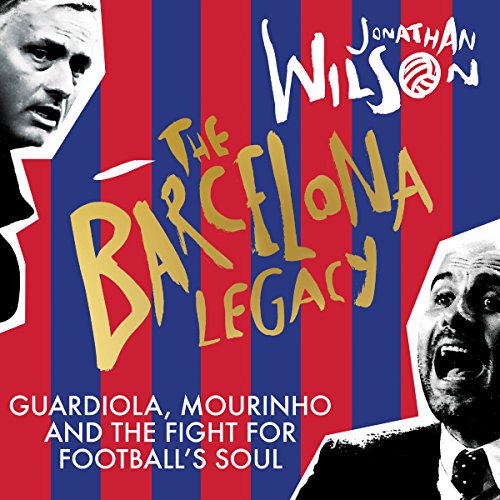 Manchester, 2018: Pep Guardiola and José Mourinho lead their teams out to face each other in the 175th Manchester derby. They are first and second in the Premier League, but today only one man can come out on top. It is merely the latest instalment in a rivalry that has contested titles, traded insults and crossed a continent but which can be traced back to a friendship that began almost 25 years ago.

Barcelona, late '90s: Johan Cruyff's Dream Team is disintegrating, and the revolutionary manager has departed, but what will come next will transform the future of football. Cruyff's style has changed the game and given birth to a generation of thinkers: men like Ronald Koeman, Luis Enrique, Laurent Blanc, Frank de Boer, Louis van Gaal, and Cruyff's club captain, Pep Guardiola, and a young translator, José Mourinho.

The Barcelona Legacy is an audiobook in part about tactics, about how the theories that underpin the modern game were forged by Cruyff and his successors, but also about the people and personalities who gathered at the Camp Nou for what was effectively the greatest coaching seminar in history, about their friendships and rivalries and, in one case, an apocalyptic falling out that continues to shape the game today.

It was ok. wasn't blown away . easy listen with some nice historical reference. but mostly modern day stories and characters. if you are a big football fan then most of references are known

Despite the stick Jonathan Wilson gets from fellow football colleagues on a certain football podcast this is not at all a dry tome about formations but an entertaining history of both ideas and personalities associated with the diffusion of Dutch footballing ideas into the world.
The audiobook makes an excellent companion to the short podcast series about the book.
My only quibble with the performance is the curious pronunciations of non-English names, tho at least the reader is making an effort to pronounce them correctly.