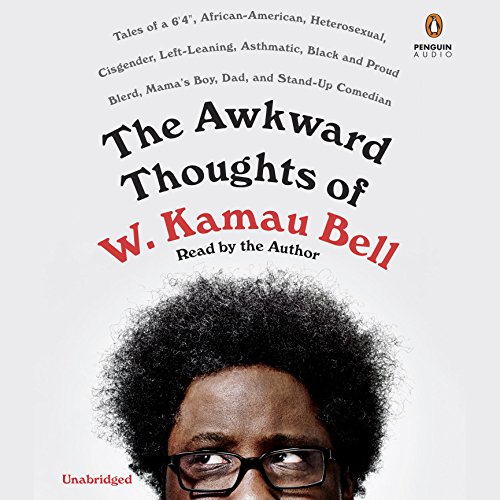 You may know W. Kamau Bell from his new Emmy-nominated hit show on CNN, United Shades of America. Or maybe you've read about him in The New York Times, which called him "the most promising new talent in political comedy in many years." Or maybe from The New Yorker fawning over his brand of humor writing: "Bell's gimmick is intersectional progressivism: he treats racial, gay, and women's issues as inseparable."

After all this love and praise, it's time for the next step: a book. The Awkward Thoughts of W. Kamau Bell is a humorous, well-informed take on the world today, tackling a wide range of issues, such as race relations; fatherhood; the state of law enforcement today; comedians and superheroes; right-wing politics; left-wing politics; failure; his interracial marriage; white men; his upbringing by very strong-willed, race-conscious, yet ideologically opposite parents; his early days struggling to find his comedic voice, then his later days struggling to find his comedic voice; why he never seemed to fit in with the black comedy scene...or the white comedy scene; how he was a black nerd way before that became a thing; how it took his wife and an East Bay lesbian to teach him that racism and sexism often walk hand in hand; and much, much more.

"Although the text version is an interesting, if curiously structured, work, the audiobook allows Bell a more apt platform for his offbeat intelligence and idiosyncratic voice. The experience of listening to the text, which clocks in at 10 hours and 31 minutes, is like being the sole patron in a comedy club while Bell performs a marathon stand-up routine.... [T]he audiobook allows a listener to hear the jokes as they were meant to be delivered." ( The New York Times Book Review)

I have raised my bi-racial son by myself in the same small town I grew up in, which lacks ethnic diversity. As a 6'2" 17-year-old black nerd and future Mechanical Engineer, I have always been afraid to send him out into the collegiate world not knowing what obstacles await him outside of our peaceful hometown. Has he experienced racism? Sure. But mostly from ignorant schoolmates that have never known a black person. Kamau put many things into a perspective that made me assign this book to my son as his "black homework". I think they share a lot of the same obstacles- my son and Kamau are both Blerd's and are both extremely politically educated.

I enjoyed his personal story of growing up, his comedic journey, his relationship, etc- all while peppering in the political and racial issues of our time. It's as much a story of his life as it is a lesson on logical thoughts and ideas from a brilliant mind. This book gave me "the feels", and as a white woman I wasn't sure I would relate, but was doing my due diligence as the mother of a black man. I was wrong. This book is for everyone.

Another great think from Bell

I always love hearing the insights of W. Kamau Bell. Be it his podcast or his shows I always love the man's perspective humor and good natured view. In this we get a little back story and it works a bit like a legend or the origin story of some political satire superhero. A great read and worth the credit. I also would like to be the first to offer up my vote for him should he ever run for political office....
I want credit for being the first to reference that.

If you read only one hilarious book on rasism...

I loved it; funny, moving, a plea to understand racism, and to take the action needed to end it. W. Kamau Bell is a stand up comedian so he knows how to tell a story and there are many enertaining/cringe-worthy stories of growing up African American in this book.

He lets you laugh with him about it. And you will laugh.

I look forward to his next book.

Loved listening to Kamau's experiences although some parts left me sad and angry. The chapters are laced with humour, calls out sexism and racism and make you reminisce of your summers spent with grandparents! Read/listen to the book and thou shall not be disappointed!

I enjoyed this author's humor and candor as he tells about how he is dealing with racism in the 21st century. As well as his coming of age tale sometimes painfully honest yet humorous and entertaining.

I loved every minute of this book. Kamau's sweet, funny, yet strong and powerful voice makes his storytelling come alive. This book is about comedy, family, racism, friendship, Kamau's life journey and more. It is hilarious and compelling. I highly recommend it!

Helped me get woke.

Love this book. A useful guide to reconning with white privilege and figuring out what to do about it. awesome.

Memoir and thoughts on life

One of the things that I really love in this book was how subtly that important content can be shared. Kamau Bell sucks us adults by talking about TV and comics from when he was a child and the role that his love of superheroes played in his identity development. But that just primes you for his adoration of Doc McStuffins as one of the greatest shows in the history of TV. Not just important for Black girls to see a character that looks like them on TV, but one that is also for my children (who also love Doc McStuffins) and help break down the concepts of white normativity. White kids need to see that not everything is designed just for them.

I had a long twitter conversation the other day about the importance of diverse authors and subjects in seminary education. It didn’t work, after spending way longer than I should, I gave up because the guy simply did not see how representation matters. I think that if I had previously read this section, and he had been willing to read it, I think this would have far better communicated the importance of representation than I did.

That is one little story from The Awkward Thoughts of W Kamau Bell, but I think it is a good illustration of the strength of the book. Bell is telling his story, but he is also talking about what is important to him as a comedian and as a person.

I honestly had never heard of him before I picked up the book. It was on sale, I have been trying to keep my reading 2/3 non-White authors, and when I saw several people I know liked the book I picked up, first the kindle when it was on sale and then the audiobook when it was on sale, combined cost less than either of the normal prices. In general I think most comic’s books are better listened to than read, or at least I will affirm that for Trevor Noah, Jim Gaffigan, and Tina Fey, comedians that I have listened to their books. But I think the type of comedy that Kamau Bell does, this could be read or listened to equally well. I alternated between reading and listening.

Because I have no context for him before the book, all of this was a surprise. By the time I read the book I knew he had had TV shows, but I have not yet seen any of them, although I will try to watch United Shades of America (I really don’t watch TV). So the story of his life and the history of his comedy and the trials of his relatively recent success were not backstory of a celebrity that I already knew, but completely new information about someone that I knew nothing about.

What I like most about the memoir is that there is little self justification or spin. There is a lot of wondering if he made the right decisions, of saying clearly, that he did not make the right decisions in other places, and the showing of how he has learned over time. There is a clear humility that carries through the book. He knows he has lots to learn about the world and he wants to learn and grow as a person.

We are right about the same age. And our kids are right about the same age. So some of his touchstone events in life I experienced at the same time, but in very different physical and social spaces. I can tell his politics lean left, but honestly I am not sure how left. While he did not shy away from politics in the book, the book was about his story, and about issues like racism and sexism, but not particularly about partisan politics (although Trump does come up.) I think that will probably keep the book from becoming too dated too quickly.

I have been reading a lot about race and history over the past several years. That can get very heavy. There is real skill in The Awkward Thoughts of W Kamau Bell in keeping the content, but presenting in a way that is very readable. It is a great change of pace and I will gladly read anything else he writes.

The author takes on a difficult topic in a way that is engaging and unfailingly humorous, yet profound and thought provoking.

I didn't want to stop listening to this book. Kamau is funny, brilliant, and completely relatable. He also provides a lot to think about in regards to race and gender in America. I'll be listening to this one again.