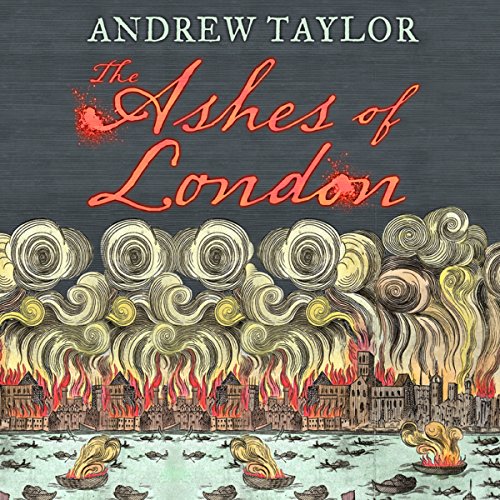 The Ashes of London

From the number one best-selling author of The American Boy and The Silent Boy comes a brand-new historical thriller set during the time of the Great Fire of London. The first of an exciting new series of novels.

London, September 1666. The Great Fire rages through the city, consuming everything in its path. Even the impregnable cathedral of St. Paul's is engulfed in flames and reduced to ruins. Among the crowds watching its destruction is James Marwood, son of a disgraced printer and reluctant government informer.

In the aftermath of the fire, a semi-mummified body is discovered in the ashes of St. Paul's, in a tomb that should have been empty. The man's body has been mutilated, and his thumbs have been tied behind his back. Under orders from the government, Marwood is tasked with hunting down the killer across the devastated city. But at a time of dangerous internal dissent and the threat of foreign invasion, Marwood finds his investigation leads him into treacherous waters - and across the path of a determined, beautiful and vengeful young woman.

" The Ashes of London is the book we all dream of writing and of reading: a crime thriller that pushes the pages over with effortless ease, while at the same time weaving an intricate, delicate, delight of a tapestry that draws us into a time and place that are so rich, so perfectly balanced that we walk alongside the characters, inhabit their shoes, feel their fear and taste their hope, all written in Andrew Taylor's beautiful hand-crafted prose. This is a book to revel in, a joy and a delight. Definitely one of the must-reads of the year." (Manda Scott, best-selling author of the Boudica Dreaming series)
"Praise for Andrew Taylor: Taylor mastery of plot and character show to great effect in a story that has a depth few other historical crime novels can match." ( Sunday Times)
"As a writer, Taylor wears his learning lightly and shares with Hilary Mantel the capacity to take the reader directly into a vanished world." ( Times Literary Supplement )

I enjoy historical fiction and I loved the setting of this story in London just after the Great Fire; it whet my appetite to learn more about the reconstruction of the city. I’ve visited London numerous occasions and I know that most of Wren’s vision for the new city never came to pass, but I don’t know why… I’m looking forward to reading more on the topic.

The story in this book was very entertaining, and I think I would have enjoyed it even more if I was better able to keep track of who was who! (I’m terrible at remembering names). I really appreciated the author’s style: fluid and descriptive enough that I got a good feeling for what life was like in late 17th century London, and yet he didn’t drone on about every last detail so I still got to use my imagination to build up the world in my mind.

Great story! I can easily recommend it.

JUST KEPT GETTING DEEPER INTO THE BLOOD AND ASHES

If you enjoy historic novels you will really enjoy this one. Taking place in the ashes of London after the Great Fire of 1666 the mystery just keeps getting deeper and deeper. Well developed characters intertwine with historic events and some of the real players even make an appearance. The fire rid London of many of the rats that brought the plague to its' people but not all of them got fried by the fire.

Already want his second book in the series

Great atmosphere and character development. Wanting to listen to the second in the series and Audible does NOT have it available. A great read.

Great story and excellent narrator. Sophisticated as well as historically interesting. Now I might get his trilogy.

This seems to have been written by a born again feminist who dipped into historical events to supply background scenery. I forgot that I had previously returned this plodding and lame novel to audible and sank up to my temporal lobes again before I realized the problem wAs the awfully predictable narrative and not my mental health. Avoid.

As a foreign born I didn’t know much about this fire. Andrew Taylor transported me to that time.

It was a fun story to listen to, the characters felt believable, and the narration was good.

One of the best historical fiction novels

Leighton Pugh is a superb narrator! He brings the characters to life so convincingly. Of course the story by Andrew Taylor is fantastic. A thoroughly enjoyable experience!