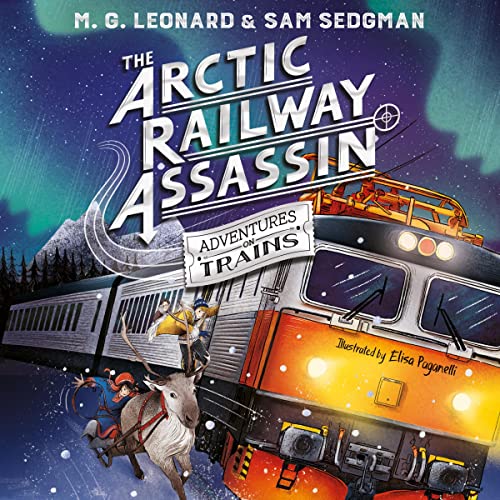 The bestselling, prize-winning Adventures on Trains series embarks on a thrilling sixth adventure as Harrison Beck and Uncle Nat climb aboard the night train to Narvik, travelling to the Arctic Circle to see the northern lights for Christmas.

But as their train leaves Stockholm, Hal and Uncle Nat realize they’re being followed by a sinister figure, and Hal’s powers of observation are tested when Uncle Nat’s past comes back to haunt him. Journeying into the never ending night of the arctic winter, our railway detectives must outsmart an assassin in their most chilling adventure yet, in which nothing is as it seems.

The Arctic Railway Assassin can be listened to as a stand-alone novel, or enjoyed as part of the award-winning Adventures on Trains series written by M. G. Leonard and Sam Sedgman. Join Hal and Uncle Nat on more stops in this thrilling series with: Murder on the Safari Star, Danger at Dead Man's Pass and Sabotage on the Solar Express.

Good follow up to the earlier book. Great narration. Great to listen along with the book for younger readers.

Why I am going to stop reading this series

I loved the first few books but now I think it is getting a bit too dark and grim so please take it back to less stressful crimes like burglaries please!