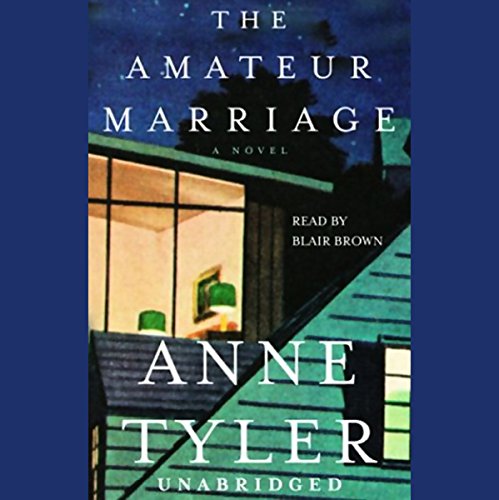 They seemed like the perfect couple: young, good-looking, made for each other. The moment Pauline, a stranger to the Polish Eastern Avenue neighborhood of Baltimore (though she lived only twenty minutes away), walked into his mother's grocery store, Michael was smitten. And in the heat of World War II fervor, they are propelled into a hasty wedding. But they never should have married.

Pauline, impulsive, impractical, tumbles hit-or-miss through life; Michael, plodding, cautious, judgmental, proceeds deliberately. While other young marrieds, equally ignorant at the start, seemed to grow more seasoned, Pauline and Michael remain amateurs. In time their foolish quarrels take their toll. Even when they find themselves, almost thirty years later, loving, instant parents to a little grandson named Pagan, whom they rescue from Haight-Ashbury, they still cannot bridge their deep-rooted differences. Flighty Pauline clings to the notion that the rifts can always be patched. To the unyielding Michael, they become unbearable.

From the sound of the cash register in the old grocery to the counterculture jargon of the sixties, from the miniskirts to the multilayered apparel of later years, Anne Tyler captures the evocative nuances of everyday life during these decades with such telling precision that every page brings smiles of recognition. Throughout, as each of the competing voices bears witness, we are drawn ever more fully into the complex entanglements of family life in this wise, embracing, and deeply perceptive novel.

"[Anne] Tyler's strength resides in her penetrating psychological portraits and delight in mundane details, and these gifts are evident....Her observations about how abruptly even the most boring life can go wrong, and about the fact that we are all amateurs in our first marriages, are poignant." (Booklist)
"Yes, Tyler intuitively understands the middle class' Norman Rockwell ideal, but she doesn't share it; rather, she has a masterful ability to make it bleed." (Publishers Weekly)

Being an Anne Tyler fan I found this book to be less than expected. The characters are hard to warm up to and there seems to be no thread of happiness in this book. Used to the dry nature of Tylers novels I still found this one unsettling in a depressing sort of way.

reading this was an unpleasant experience - making you care for the characters in the wonderful opening chapters just enough so that you could feel enormous disappointment when you were left in limbo as to their fate when decades would vanish from their lives. It was really painful. more than a waste of time - this read was downright aggravating! and Audible should not call it romance, more like Greek tragedy.

The Amateur Marriage is a nearly vintage Anne Tyler novel:, offering a slightly off-kilter family, a fine sense of time and place and an excellent eye for detail expressed in well-turned phrases. But this book is written on a larger canvas than her others, spanning over 40 years in the lives of Pauline and Michael Anton. The story begins in 1941 at the start of World War II when Pauline falls in love with Michael for no other reason than she needed a man to send off to war. But Michael?s war career is short-lived and he soon comes limping back to Baltimore and into Pauline?s waiting arms. They quickly marry and live with Michael?s mother over the family grocery story. It is immediately clear that the couple is not a perfect fit. Pauline is impulsive, determined and ambitious while Michael is slow, plodding and perfectly happy in his small inner-city grocery store. Pauline?s will prevails, however, and the couple?along with Mother Anton and their new daughter, Lindy?move to one of the spanking new suburbs that blossomed around the country in the early 50s. Michael opens a new grocery story and the family adds to two more children. Except for the constant bickering between Pauline and Michael, all is well until Lindy abruptly vanishes, the only trace of her the three-year old son she abandons in San Francisco. Still devastated over the loss of their daughter, the Antons bravely press on and begin another round of carpools to raise their missing daughter?s son. Unlike most Tyler novels, this one contains no epiphanies, no sudden moments of understanding. Instead, there is a rather helpless sense of time rushing on while the characters spin out their lives caught up in trivialities. And while Tyler might be criticized for giving her characters little or no motivations for their life?s choices, she can be praised for creating a family we like and care about. And that is what makes this novel worth reading.

Okay so I'm a little biased. Grew up in Baltimore, got married in Baltimore, had an amateur marriage exactly like the one in the book but geez this woman gets it right every time. Once again she leaves me with the feeling that no family is perfect, that everything is okay, it always was and always will be. Just not in the way I might think.

Another wonderful examination of the nature of families and the things that bring them together and split them apart. She is really good at putting you in each person's shoes while telling the story objectively, letting each reader identify with the character that speaks to them. Beautifully written. #Family Relationships #Nostalgic #Hopeful #Tagsgiving #Sweepstakes

Beach and pool. Another great AT ! Tears at the finish. What more do you want?!

This book is more a reflection of how easy it is to give up on a marriage today than anything else. Just walk away. The wife is someone I would want to walk away from, but that is not the point. The husband is no winner and the kids must manage the parents lives at some points.

Aside from the skipping around, giving no explanations or depths for significant events (the daughter running away, the wife dying), this book totally frustrated me!!

The narration was excellent. I just wish the story was as good.

I've enjoyed reading previous Ann Tyler novels, but this one was like listening to my mother tell me boring stories about old distant relatives I didn't know or care about. It was well read but the story was predictable (wartime couple marry, raise kids, separate, divorce, man remarries, etc.) with each decade and its effects on the family members displayed generically (40s war effects on families; 50s black turtle necks and beatniks; 60s drugs, hippies; etc.) I finally stopped listening a couple hours from the end when I realized I could care less about any of the characters and was feeling punished by having to keep listening to avoid wasting my money.

I like Anne Tyler and she managed to keep a rather mundane story interesting. I do not think it was one of her best. I felt a little disconnected at the end, and I didn't much like the way she made her main character dissapear. There was something disturbing about the story, as I'm sure the author intended. It was not a warm fuzzy that left you satisfied. It wasn't very uplifting.

I really enjoyed listening to this book. The subtle nuances that make Anne Tylers' writing were all the more enjoyable by the reading by Blair Brown. This was not the typical Anne Tyler book about a person's awakening but how typical, flawed people react to life's trials. I got a lot out of the book and of the reading itself. It brought the book to life for me. I could relate to the characters, not being a mirror of me or my life but a compliation of myself and other people that I know.

Thank you Anne Tyler, thank you Blair Brown and thank you Audible from bringing this book to many "readers" who may not read this book otherwise. I recommend it to those flawed confused people who feel a bit overwhelmed by life's experiences.