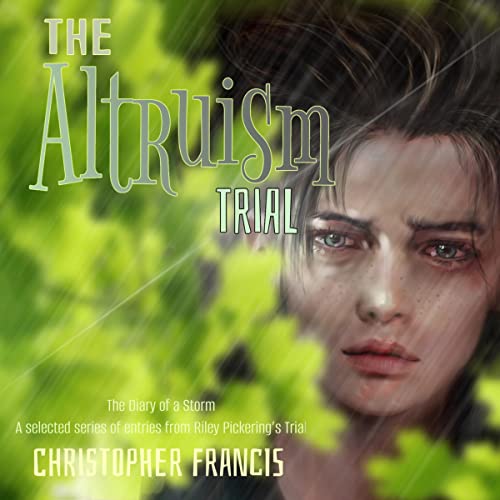 An adventure book that follows a self-centered, entitled boy as he crash-lands on an island and slowly learns the importance of selflessness and altruism.

Riley Pickering knows he'll be the next Sidney Crosby, so it is expected everyone should cater to him, take care of his needs, and worship the ground he walks on. In addition, he has no patience for school, science, Mme. Capretta, the French language, or following rules.

However, when a science project goes horribly wrong, Riley finds himself in the middle of the Pacific, stranded on an island scrambling to find ways to survive. When he meets two teenagers who are in a similar predicament, he begins to question whether he accidentally landed on the island, or whether he was intentionally sent there.

The narrator makes this story awesome!

Riley Pickering is 11 years old. He's a very talented hockey player who plans to be the next Sidney Crosby. As such, he sees no need to do anything other than practice hockey. He certainly doesn't need to learn French, or do his own homework. Of course, he also doesn't need to listen to his hockey coach either, since his hockey coach clearly doesn't understand how important he is. To add to everything else that Riley doesn't ee any need for, he's in sixth grade this year, which means he'll be participating in a program in which he must build his own airplane to fly in a ceremony in two weeks. Needless to say, even after he's delivered a big red box with all the necessary parts, he still doesn't even try - he makes his dad do it. The only thing Riley does do is continue to log his day in the tablet he was delivered by EOTS, thinking it's part of a well-rounded athlete program from the hockey league. But, when the day of the plane ceremony arrives, the unthinkable happens to Riley Pickering. What will he do now?

This book was tough to start because Riley is a truly unlikeable character. His enormous ego has driven him to become a bully to everyone, including his own parents. New iPhone model comes out that he wants? He'll break his current - perfectly good one - and make his mom buy him the new model. He yells at his younger sister all the time, terrorizing her and making her do things for her. It's quite clear that if something doesn't change, he will end up being a terrible human being. That being said, my heart went out to him in those early days on the island. He had gotten so used to having everything done for him that his ability to survive on his own - to even do the smallest thing himself - was nonexistent. Thankfully, he does learn - albeit very slowly.

That ending, though. It was good and bad at the same time. I'm still not sure how I feel about it. While it certainly showed who Riley had become in a very real way, since Paisley and Duschan didn't go through anything like that (at least, that we know of) we are still left to wonder, and that's the part that I didn't like. I'm hoping there will be a sequel, or a short story, to really finish out the story.

After enjoying reading the book, I also listened to the audiobook that was narrated by Coleman Christian. I enjoyed listening to it even more than reading it; the narrator did a wonderful job with the dialogue and the absolute self-centeredness of Riley in the beginning, as well as showing the character development he goes through on the island.

ACCEPTABLE FOR ELEMENTARY TEEN AGES AND UP.
STORY IS A SURVIVAL ADVENTURE SHOWING THE ENTITLED YOUTH EVOLVING INTO AN ALTRUIST.

Riley learns by "trial and error" to be selfless!

The author penned a very imaginative concept and scenarios that teach each student who is part of the 'trial' to connect with their undesirable behaviors. The characters are colorful and the lessons are enormous and memorable. Altruism Trial was part of my book club's featured books for a month of reading and A LOT of discussion! I feel my students were able to take away some valuable moral codes from this story! The audio was instrumental during reading & listening time. ESL students were able to learn donation, dialogue, inflection and many other comprehensive elements with the combination of reading the book and listening to the audio. Coleman Christian, did a fantastic narration of the story! Bravo to author and narrator!

The character building of the Howel’s on giligan’s isle backed by the innovation of spoiled kids…who are on their own on an island. It is a cool process to listen to, and I recommend it.