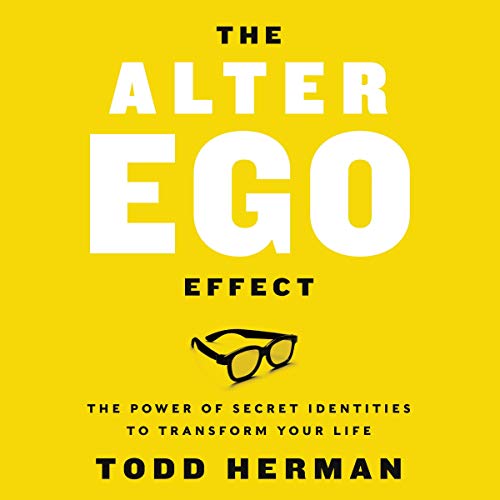 A top performance expert reveals the secret behind many top athletes and executives: creating a heroic alter ego to activate when the chips are down.

There’s only one person in the way of you unleashing your potential: you. There’s also one person who can move you out of the way so you can perform at your peak.

That person is already inside you. You just need to unlock them. This other part of you is your alter ego. After 21 years of working with elite athletes, performers, and leaders, Todd Herman has discovered how you can use your alter ego to achieve the seemingly impossible. It all clicked for Todd when he met Bo Jackson.

When Herman met Bo Jackson, the professional athlete told him, “Bo Jackson never played a down of football in his entire life.” Bo explained that when he was young, he’d get into trouble because of chaos caused by his anger issues. Then, he saw Friday the 13th and became fascinated by the cold, calculating nature of Jason Voorhees. In that moment, he resolved to stop being Bo Jackson and start being Jason the moment he stepped on the field.

In this transformative guide, Herman teaches you how to create and control an alter ego like Bo - and the thousands of other athletes, business leaders, entrepreneurs, and entertainers who have used this simple tool to change their lives. Herman also shares his own story: He knew that inside was a confident, self-assured, intelligent person who could help others get better results in their lives. When he started using Superman’s classic trick - putting on a pair of glasses - he learned to trigger the specific traits he needed to achieve his goals.

The Alter Ego Effect is not about creating a false mask - it’s about finding the hero already inside you. It’s a proven way of overcoming the self-doubt, negativity, and insecurity that hold you back and empowering you to ultimately become your best self.

Are you the best you want to be?

People have long been using alter egos to become better at what they do, become more creative, achieve a higher level of performance, overcome difficult situations and circumstances and sometimes become titans in their fields.

This is nothing new, but Todd Herman has brought it down to a very solid and workable method.

It's even scientifically proven that those who use alter egos cope better psychologically.

This book is a great take on modeling and is in my opinion, further proof of how our imagination and creativity have a direct effect on both our mindset and our performance.

His research is good, and the audio version is a great listen.

I highly recommend it.

This book is incredible. I read a lot, at least a book a week, and this one is right up there with the best.

It will show you a simple way to improve your performance in areas of your life that matter most.

*It wraps up so many important concepts into a simple package anyone can understand and get value from.
*Its actionable. I’m already seeing results.
*Best of all... its fun. The stories, the exercises, and the whole entire concept is fun. Haven’t enjoyed a book this much in a while.

Get it, read it, put it into action. You won’t be sorry.

Great concept but summed up in the intro

I absolutely love the concept that this book introduces: using an avatar or alter ego to do things that our everyday egos deem to be too difficult, too big, too scary etc. I think this is a powerful and useful idea, and the author gives many examples of how his clients and peers are using alter egos they create in their daily lives, especially in sports and business situations.

However, I feel that one just needs to read the intro chapter or so to get the entire concept down. The rest of the book is just reiterating over and over why you should create an alter ego. And while it does give other examples of people’s alter egos and how they use them, I feel it’s unnecessary and rather repetitive and redundant.

Want to slay your dragons? Here’s how

LOVE this audiobook! If you have ever been plagued by imposter syndrome or let the little voice in your head convince you not to follow your dreams, this is the book for you! Or if you are a competitor looking to gain a performance edge, yep, it can help you too (whatever your “field of play” might be).

Todd Herman’s depth and breath of experience and research related to the mental game and how alter egos can enhance performance is phenomenal. This is not your typical personal development book filled with theories or the author’s personal story (I can do you can too) or just motivational nonsense that isn’t actionable.

This book is a “playbook” of the why, what and how of alter egos with lots of real life examples from sports, business, celeb and every day people.

Todd reads this himself - and I enjoyed listening to it. Having the audiobook version as well as the Kindle version allowed me to also use whispersync for an “immersive reading” experience.

I plan to both listen and read it again- and have already seen the impact of a quick and dirty creation of one alter ego which I then took for a “test drive” using some of the exercises in the book and saw how powerful it could be.

Note: this is NOT a “fake it until you make it” technique. It is a way to leverage and access your existing “superpowers” when you need them most - to be your “heroic self” on your most important field of play.

...that could have been a great, longer article on Medium. As a book, for me at least it falls into being too repetitive, over categorising and dramatically labelling simple concepts, processes and methods that would have been much easier to understand and remember if approached differently. But in order to provide some unique formula to this phenomena that many people will recognise and confirm to have been using in some way, one needs to brand and label the content. I don’t dig that.

I was super excited when I came across Todd's book as I had already been thinking a lot about the concept. I love how he lays out the argument for developing and employing an alter ego, and breaks down the process for its development. He includes things I hadn't previously considered, such as identifying or recognizing your "enemy"... which I interpret as fear, or procrastination, or avoidance, or something akin to what acclaimed author Steven Pressfield, (The War of Art, Gates of Fire, and many others) calls "resistance", and then giving it a name. I especially appreciated how Todd expounded on this particular point using the movie Jaws as an example of how something that is unseen, unknown, and unnamed is way scarier than that which is known, revealed and out in the open. I only recently downloaded the audio book but have already listened to it twice, taking notes all the while. Fascinating material, practical, actionable. Really great work!

The core content is great but theme maybe too much

I think there's a lot of value to take away from this book and concepts that are based on truths on how the mind works. Todd does a great job of illuminating these concepts in a reasonable length of time, with examples not being too overwhelming or overdone like a lot of self-help books.

Where it gets a little fiddly is Todd's general theming of the concepts, really double downing on the whole superhero and super villain theme, which gets a little weird and maybe juvenile. For me it might have even muddied the waters in terms of clarity of the core concepts, however, it's hard to say whether the theming actually helped maintain my interest to digest what is potentially dry concepts that is frequent in self-help books.

Ultimately though, there is value to be had here, but might need to sit, think, redigest and map out everything to really get to the core of it all, without all the (debatably) unnecessary hero speak.

If not YOU, then WHO?

You might think that you aren’t capable of succeeding at something, and that someone else might be better suited for the job...

But what if that other person actually lived INSIDE of you?

The concept here is basically become an actor, or imagine that you are your favorite superhero...

...or create your very own superhero!!

This book is very good, and you will come away knowing exactly how to flip the switch when you need to and become your most powerful version!

Get out of your own head and become your own greatness!

Get this book now, and don’t stop listening to it until it’s finished!

Acted as an eye opener

The concept of this book is radically awesome. I really got immersed into it. Must read for anyone feeling left behind in their work or life...

Loved the alter ego! Very inspirational audio book! Todd Herman not only shows how his method has transformed numerous people across all paths of life but also how to implement it into your life. The audio recording is amazing. Highly recommended!

While listening to a podcast during which Todd describes the tennis player whose “fairness” values were causing her to pull back and let her opponent come from behind... I instantaneously understood the thing in me that was holding me back. I immediately bought the book and am discovering ways alter egos can continue to help me in the various fields of play that comprise my life. Highly recommended for anyone who knows in their gut that there is more to life...and who’s willing to use their imagination to get it. This is the real deal.

I already read quite a few books about self-development, and this has to be one of the best ones out there. Unique approach, extremely interesting and quite entertaining as well.

wow- powerfully- it’s definitely a musthear- for everybody who wants to improve the own performance.