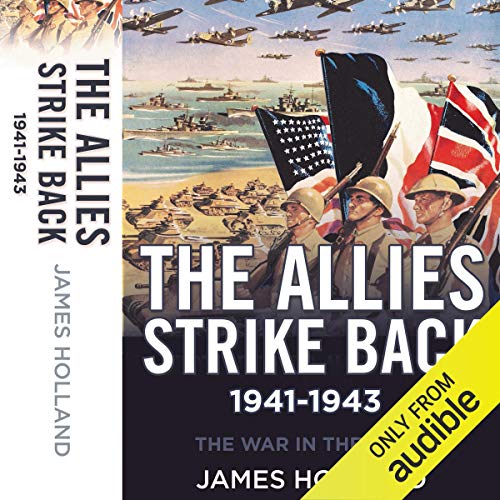 By June 1941, Germany's war machine looked to be unstoppable. The Nazi blitzkrieg had taken Poland, France, and Holland with shocking speed. The Luftwaffe had bombed London, while German U-boats wrought havoc on Allied shipping on the Atlantic. And yet, as James Holland shows at the start of The Allies Strike Back, 1941-1943 - the second volume in his magisterial narrative of World War II in the West - cracks were already appearing in Germany's apparent invincibility. Shortages of food and materiel were becoming critical. And, having failed to defeat Britain, Adolf Hitler fatefully pivoted east to invade the Soviet Union - territory he felt compelled to conquer for Germany's protection - and on June 22, 1941 precipitated the largest clash of arms the world had ever seen. Built for speed and quick conquest, German forces by that fall were bogged down in a horrible war of attrition that blunted the Nazi momentum.

The Allies Strike Back offers fascinating new perspective on the critical middle years in World War II's western theatre, as the advantage between Axis and Allied forces swung back and forth on the Atlantic and eastern front, and in north Africa and Europe. Acclaimed historian James Holland has spent years conducting original research and interviews, mining newly available archives, visiting battlefields and uncovering letters and diaries previously unread. Acknowledging that strategy and tactics have been the focus of previous histories, he gives equal space to the logistics and supply of men and materiel without which no war can be fought. Allied and Axis leaders criss-cross Holland's narrative, but he also memorably introduces listeners to heretofore unknown participants: Sgt. Ralph Schaps, who experienced the Louisiana Maneuvers that propelled him into Europe; Colonel Hermann Balck, in command of a German panzer regiment in Africa; U-boat captain Teddy Suhren, operating against Allied shipping in the Atlantic; Billy Drake, squadron commander in Britain's Desert Air Force that helped turn the tide in North Africa; and many others.

Following the acclaimed first volume of his trilogy, The Rise of Germany, and offering frank assessments of successes and failures on both sides, James Holland has crafted a masterful and gripping narrative of the events that ultimately determined the outcome of World War II.

Where is the third volume in the series? Don’t leave us hanging. Reply today or soon.

Well researched book. Great narration. Covers mostly the war in Africa and the Battle of the Atlantic.

James Holland is a superb, professional historian who has done the exhaustive work necessary to expose the critical understory of the war and it’s prosecution. Highly illuminating perspectives await the reader or listener that provide a vivid understanding of the ebbs and flows of the stages of WWII. No reader will be disappointed!

This history focuses more on the battle for resources and production capabilities. Interesting insights into the capabilities and shortcomings of various weapons systems.

book one, voice actor much better.

why are you pronouncing Von Luke's name as Soon luck? this is a lazy mistake.