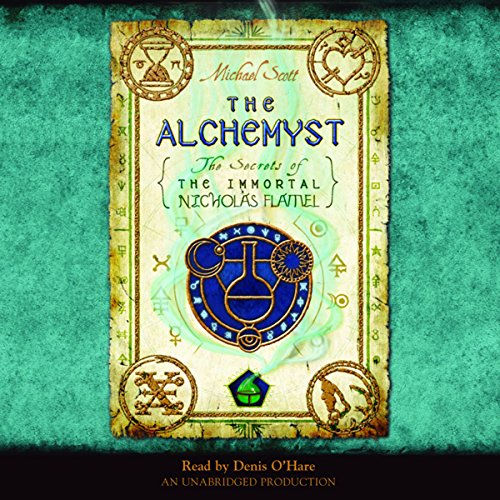 Nicholas Flamel appeared in J.K. Rowling’s Harry Potter - but did you know he really lived? And his secrets aren't safe! Discover the truth in book one of the New York Times best-selling series The Secrets of the Immortal Nicholas Flamel.

Nicholas Flamel is the greatest Alchemyst to ever live. The records show that he died in 1418, but what if he's actually been making the elixir of life for centuries?

The secrets to eternal life are hidden within the book he protects - the Book of Abraham the Mage. It's the most powerful book that has ever existed, and in the wrong hands, it will destroy the world. And that's exactly what Dr. John Dee plans to do when he steals it.

There is one hope. If the prophecy is true, Sophie and Josh Newman have the power to save everyone. Now they just have to learn to use it.

“The Secrets of the Immortal Nicholas Flamel has everything you loved about Harry Potter, including magic, mystery, and a constant battle of good versus evil.” (Bustle)

“Readers will be swept up.” (Kirkus Reviews, starred)

“An exciting and impeccably thought-out fantasy, well-suited for those left in the lurch by Harry Potter’s recent exeunt.” (Booklist)

I thought this sounded like a great book since I am into fantasy and mythology like Lord of the Rings and Eragon. Not that I would compare this book to any of those titles but when I heard "Welcome to Audible Kids" when I started the book on my MP3 player I may have blushed just slightly (I'm 49). Turns out the book is fantastic and so is the reader. I like to think I am of above average intelligence and this book entertained me and left me wanting more and just did not seem at all to be a children's novel. It is rare that a writer can write something that appeals to old and young alike but that is what you will find here. I love the characters and the voices are handled nicely by the narrator. I highly recommend it and the two that follow it as well.

Harry Potter fans would like this book, I think. There's the magic of Potter, but most of it takes place in present day California. Lots of action mixed with a mystery about the past. The narrator's ability to create different voices is amazing!

I enjoyed the book, but felt that it was geared more toward a younger reader (young adult/teenager). Perhaps that's because two of the major characters are themselves teenagers. I greatly preferred the George RR Martin "Song of Ice and Fire" series - which is definitely geared to adults, and I've preferred (so far) the John Twelve Hawkes "Traveler" series. The Alchemyst reads too much like a fairy tale (so far). I do plan to listen to the next one to see if my opinion changes.

An interesting tale for 10-year olds

I could have rated it as a 4 if they had mentioned the book was written for 10-year olds. It was just too silly/childish for me to enjoy. However I do enjoy books like Harry Potter, CS Lewis's Narnia adventures, Eragon, and L.A. Meyer's Bloody Jack series, so I am not a young-adult-fiction snob. So out of loyalty to my fellow Audible book listeners I felt inclined to warn you of my assessment of this book's intended audience.

This series may or may not be intended for teenagers or the youth. It is a nice fun series. I am a seriously avid reader, and finish a novel per week. I picked up the first book in the series for my daughter. I ran out of books and picked it up. I have read all of them now. They are fun.
The series has characters that are well wrritten and believable. The goals and problems are very truthful. Michael Scott has to have or had a few teenagers because he has them down pretty well in the books.
Now don't think you are about to read a literary masterpiece but the stories have heart, soul, well planned themes and flow, and realistic well described characters. I love a good book and these are just that. GOOD BOOKS

Somewhat typical messaiahs to save the world from evil theme but with some original characters, some imaginative villians, and page turner action. Fun but nothing that feels really new or to original.

This book has you on the move from the first page, and doesn't stop to the last page. Michael Scott, Keeps you on the edge of your seat the whole book. And when you're driving, that's not a bad thing. I'd recommend this book to anyone of any age. I await more audible books from this author.

A lure to hook you on the series -- It Does!

Welcome to the world of Nicholas Flamal. This is a fitting lure to hook you into the six book series. The author uses faints and foreshadowing to keep the reader in a continual quandary of emotion and ut ohs. This work has heavy helping of fantasy mixed into the ordinary world. But a killer fantasy has to be either so over the top no one cares about the laws of what we consider real or offer fantasy with a possible life connection to the world as we know it – tenuous as it might be. Scott does the later – he paints a world of creatures, magic and legend that has threads of the distant plausible. This first book will appeal to a reader of any age. So far it's like The Hobbit meets the Traveler by John Twelve Oaks. I highly suggest you read it. I am off to the second installment.

I suppose teens might like this, though expect they'd enjoy it more in a movie, to better experience the pyrotechnics and special effects. That's really all there was to it. I guess I liked Denis O'Hare's voice in the sample, and had just finished a couple of really good books featuring twins and history-based witchcraft and mythology tales. This is nothing like those. I'm embarrassed that I actually bought this, but felt it would be a public service to strongly caution other mature adults against making the same mistake.

This book is not awful, not bad, but certainly not good - it's a stewpot. The author repeats himself a lot and uses the same analogies over and over. "like the "his tongue was too big for his mouth"... or "he had the same thought than his twin".. I got it after the first two times... twins tend to think alike. The author was influenced by Lord of the Rings and other mystical book one might have read. Not much originality, if you ask me.

I bought this book because it was on sale, I would NEVER spend a full credit or anything over $8.00 on any of the sequels. The narrator did a good job.

I really love the way Denise O‘Hare reads it. Just as emotional as it was when I read the books the first time. I love the way Michael wrote this story. It keeps you running with all the charecters, feeling everything along with them :)

Really interesting I recommend to Harry Potter fans . Has nothing to do with the magical world of Harry Potter but has its own special magic not just the in the story but the story irself

When I bought this audiobook I was expecting something exciting like Harry Potter, but alas, I was sadly mistaken. The story is an amalgam of Greek, Egyptian and Celtic/Norsk lore. There is no real story, just a series of action, fight and flight scenes with annoying characters and no character build-up to speak of. I kept waiting for the exciting core of the story, but no such luck. The thing I appreciated so much about the Harry Potter series was the slow build-up of an exciting story that mixed the mundane with the magical. The world building happened slowly. This series seems to go the mainstream route of lots of action without real background story. I must confess, I kept falling asleep all the time while listening and was almost bored to death by the whole thing. I certainly won't be listening to the rest of the series. Clearly, not everybody can use old myths as deftly as JKR.

The reader did a good job at emulating various accents, and was pleasant to listen to.