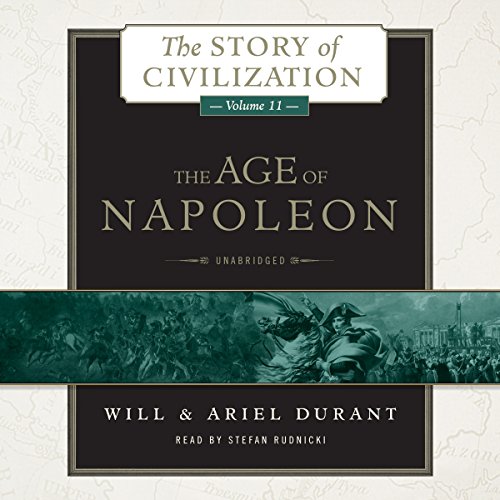 The Age of Napoleon

An engrossing volume on European civilization by Pulitzer Prize-winning historians Will and Ariel Durant.

The Age of Napoleon, the 11th and final volume of the Story of Civilization, surveys the amazing chain of events that wrenched Europe out of the Enlightenment and into the age of democracy. In this masterful work, listeners will encounter the French Revolution from the storming of the Bastille to the guillotining of the king; the revolution's leaders - Danton, Desmoulins, Robespierre, and Saint-Just - all cut down by the reign of terror they inaugurated; Napoleon's meteoric rise from provincial Corsican military student to emperor and commander of the largest army in history; Napoleon's fall - his army's destruction in the snows of Russia, his exile to Elba, his escape and reconquest of the throne, and his ultimate defeat at Waterloo by the combined forces of Europe; and the birth of Romanticism and the dawning of a new age of active democracy and a rising middle class, laying the foundation for a new era.

A gift to humanity

I've just spent 20 months absorbing the entire 11 volume series during my commute to work. Every day, I could not wait to listen. When I heard the last sentence of the last series spoken, I felt as though my life had reached a new epoch - crossing some type of threshold summing up my understanding about the nature of man and the history of our civilization.

This work by Durant is not just a record of history tinged with philosophy, but a gift to posterity by a lifetime of research and a craft of language distilled into a masterpiece of art.

There is far too much information to retain in one reading so I've decided to start listening to the series again from the beginning.

Thank you Mr. and Mrs. Durant.

Great End of a Great Series

This is the final book of the wonderful eleven volume "The Story of Civilization" series. For my comments on the series as a whole see my review of book 1 "Our Oriental Heritage".

This is one of my favorite volumes of the series. This was book was the last written (in the late seventies) and Durant's style improved a bit over the years and the writing is a bit less dated. Durant continues his approach of integrated history, covering business, crafts, art, science, economics, politics, classes, and even rulers and war (along with some dates).

This volume covers roughly 1777-1840 including more of the French revolution and the Napoleonic period and aftermath. Durant attempts to portray Napoleon evenhandedly, pointing out his despotic tendencies as well as his democratic feelings and respect for justice and law, and setting the context of the Terrors.

This series can seem daunting, but it is really quite easy, pleasant, and (yes, hard to believe) short. This is my third time through the series (which took a tad over 3 years to complete this time) but I read & listened to many other books over that period. The material is not like most other histories. I like to say it is 20% about sex. Who is sleeping with whom (or not) and other various relationship details. Another 20% is about historical figures you already know quite a bit about. 20% is background about day to day life of each period, that you haven't heard about, but is easy to understand and makes everything else more interesting. Another 20% is about major events, most of which you already know quite a bit about. The final 20% are details about the most interesting lesser known characters and events related to the people and events you already knew about. Thus, almost everything in the series is very approachable and builds into a completely enjoyable whole. My daughter started the series in high school and did not find it boring or tedious. Just cut out a little TV each day and you will finish the series in just a few years (and perhaps want to start it again!) I enjoyed it more each time through.

Even this last volume is dated and the series has a strong western anglo-saxon bias, nevertheless, it is well worth the investment. I am sure it is not for everyone, but I recommend anyone who likes history give it a try.

The narration throughout the series is excellent.

Will and Ariel Never Fail

What made the experience of listening to The Age of Napoleon the most enjoyable?

This looong history paints scenes encouraging you to step in - feel the tensions, see the people and snapshot moments that made history. The endless research and witty descriptions never fail to inform and amuse.

Thank you for the detailed analysis. I love Will and Ariel
Durant. I look forward to
The Age Of Reason.

Great ending to a great series.

This last book in this eleven volume collection, that the Durant’s did not expect to live long enough to write, was every bit as good as the first ten. My only regret is that I never got to spend an evening talking to them.

An Illustrious End to a Marvelous Series.

I had a fantastic time listening through since Volume 9;
I suspect I will reapproach the earlier volumes once I have again a taste for those periods. I would love to hear what the Durant's would have to say about these modern times! Despite a smattering of inaccuracies, the value of the narrative, in vivacious compelling voice, leads to engagement in so many elements of history that are nowadays neglected. Beautiful writing and I suspect I will return to listen again for comfort and pleasure in the following years.

No more wisdom in human affairs

Would you consider the audio edition of The Age of Napoleon to be better than the print version?

The audio edition is more practical to go back and listen to bookmarked passages. However, in this case, maps were necessary to visualize the war.

Have you listened to any of Stefan Rudnicki’s other performances before? How does this one compare?

His performace is as the other narratives he gave in the Story of Civilization.

No. The diversity of the stories represented in the chapters and books make it impossible to listen in one sotting, unlike a fiction novel.

Sad this was the last book.

An important work on one of the few people who truly played a role in changing human history.

in the world where we were not taught real history in our public schools, Durant's book is a literary masterpiece. I learned all about Napoleon in ways that captivated every moment. outstanding in every way.

It is astounding to think of how Will and Ariel Durant were able to conduct all of that research before the age of the internet. Excellent narration by Stefan Rudnicki.