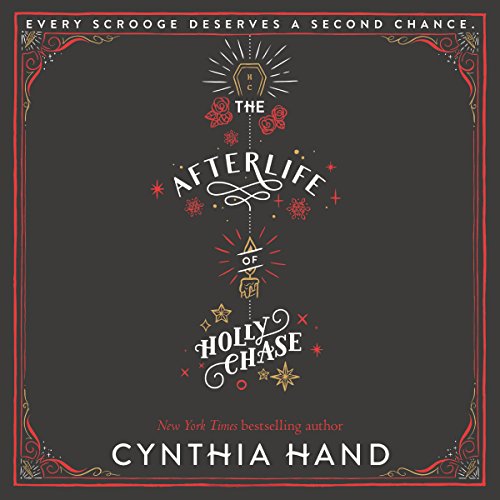 The Afterlife of Holly Chase

The Afterlife of Holly Chase

Before I Fall meets "bah, humbug" in this contemporary YA reimagining of A Christmas Carol from New York Times best-selling author Cynthia Hand.

On Christmas Eve five years ago, 17-year-old Holly Chase was visited by three Ghosts who showed her how selfish and spoiled she'd become. They tried to convince her to mend her ways. She didn't. And then she died.

Now she's stuck working for the top-secret company Project Scrooge - as their latest Ghost of Christmas Past. So far, Holly's afterlife has been miserable. But this year's Scrooge is different. This year's Scrooge might change everything....

The Afterlife of Holly Chase is a witty, poignant, and insightful novel about life, love, and seizing second (or third) chances, perfect for listeners who loved Before I Fall or Dash and Lily's Book of Dares.

A nice light-hearted modern day retelling of a Christmas Carol. The narrator was a perfect fit.

Holiday feels in the Middle of May

I had fun listening to this. I needed to watch The Christmas Carole first though to be ready with the story. This was recommended by Emmmabooks and was not disappointed.

Erin Spencer is always one of my favorites for a narrator. She brings the stories to life and always seem to make them just a bit better.
The book itself was enjoyable and made me laugh and expect another twist here or there as it came to a close. Over all I'd recommend this book 😊

Fun spin on a classic, even for one that's already been spun so many times

And a Happy New Year!

This was an adorable story. As a Christmas baby, I'm always on the lookout for cute YA especially surrounding Christmas. I know it's not Christmas yet but I'm in the mood and I feel like I spent my time wisely listening to this super sweet story. Merry Christmas to all and God Bless us all EVERYONE!!!!!!!!

Great book! I loved how it ended! I was thinking it may turn out differently and I am glad it didn't go that way.

It was a beautiful surprise

The ending was the best part. It touches all my emotional parts, this was a fantastic story with a great message, one that I'll remember for a long time.

I truly truly enjoyed reading (& listening!) to this book over the holidays. It was one of those books I could not wait to pick up again – and perfect for the holiday season. I can honestly say I look forward to reading this book again next holiday season… I loved the twist on the Dickens classic. Cynthia Hand did a wonderful job with the characters & world. It was actually one of those books I was sad was over because I felt like I was saying goodbye to friends. I know, I know… but i’m going to miss Holly! Annoying she was at times.

Would you listen to The Afterlife of Holly Chase again? Why?

Yes! I could easily slide this into my personal yearly Christmas traditions. The story was light, meaningful, and completely unexpected. The characters were unique and intriguing, I've never read/listened to such a selfish main character such as Holly Chase and I loved every minute of it. I watch A Christmas Carol in its various formats every year and this book, I believe, had the same type of annual 'replayability' vibe as any other adaptation.

What other book might you compare The Afterlife of Holly Chase to and why?

Obviously, this was a re-envisioning of A Christmas Carol which I have seen film adaptations of time and time again. I was hoping it would both stick-to and break the traditional Christmas Carol format so I wouldn't experience anything that was too copy 'n pasted or too alien. In other words, I've not read many re-imaginings of stories for fear of being let down either way. BUT if you were looking for a good one, this would be a great story to start with.

What does Erin Spencer bring to the story that you wouldn’t experience if you just read the book?

Erin Spencer's attitude and girlish voice acting REALLY brings out the Holly Chase in this novel! If I had read the book first, her narration would probably be EXACTLY what I would hear in my head. She did a great job with Steph and Boss (Baws?). I also appreciated her trying to make the guy voices different, I know that must be difficult.

YES!!! I would have listened to this all in one sitting if I could have. The length isn't too bad but you certainly need a good chunk of time to accomplish that. Anyway, the reason I would try is mainly due to the fact that A Christmas Carol is so short and easy to get through that I feel like any spinoff should be treated much the same.

A Christmas tale to melt any Scrooge's heart

This book was amazing! I'm not really into holiday themed books, but I kept running upon this gem every time I turned around, son I caved and I DID NOT regret it. Makes me want to read more Christmas books!