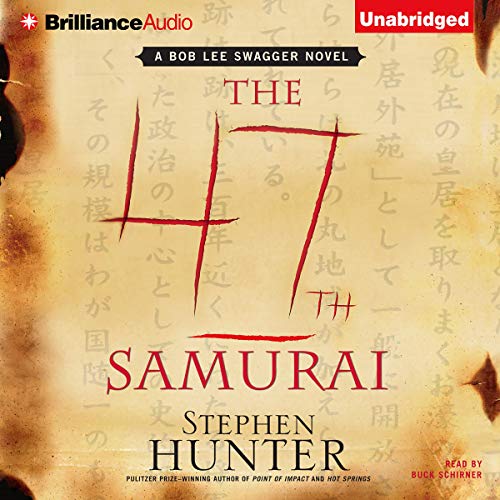 Bob Lee Swagger and Philip Yano are bound together by a single moment at Iwo Jima, 1945, when their fathers, two brave fighters on opposite sides, met in the bloody and chaotic battle for the island. Only Earl Swagger survived.

More than 60 years later, Yano comes to America to honor the legacy of his heroic father by recovering the sword he used in the battle. His search has led him to Crazy Horse, Idaho, where Bob Lee, ex-marine and Vietnam veteran, has settled into a restless retirement and immediately pledges himself to Yano's quest.

Bob Lee finds the sword and delivers it to Yano in Tokyo. On inspection, they discover that it is not a standard WWII blade, but a legendary shin-shinto katana, an artifact of the nation. It is priceless but worth killing for. Suddenly Bob is at the center of a series of terrible crimes he barely understands but vows to avenge. And to do so, he throws himself into the world of the samurai, Tokyo's dark, criminal yakuza underworld, and the unwritten rules of Japanese culture.

Swagger's allies, hard-as-nails, American-born Susan Okada and the brave, cocaine-dealing tabloid journalist Nick Yamamoto, help him move through this strange, glittering, and ominous world from the shady bosses of the seamy Kabukicho district to officials in the highest echelons of the Japanese government, but in the end, he is on his own and will succeed only if he can learn that to survive samurai, you must become samurai.

As the plot races and the violence escalates, it becomes clear that a ruthless conspiracy is in place, and the only thing that can be taken for granted is that money, power, and sex can drive men of all nationalities to gruesome extremes. If Swagger hopes to stop them, he must be willing not only to die but also to kill.

Sharp action, but not very many bullets

An aging Bob takes up the sword, and becomes a master swordsman...? It's actually pretty good, and well narrated... but it was strange listening to a story of BLS in which he isn't peering through a scope for paragraphs at a time. The action was good, and a rather detailed account of swords and their history in Japan is given (I can't vouch for accuracy). Enjoyable.

Enjoyable if a bit over the top

It's difficult to say what I would change. I love the action and Bob Lee Swagger's persona. Perhaps make Bob's sword training take longer. Even for Bob, becoming an expert Samauri after a week's basic training is a bit too far fetched.

If you’ve listened to books by Stephen Hunter before, how does this one compare?

Which character – as performed by Buck Schirner – was your favorite?

Bob Lee Swagger without a doubt. Buck Schirner took some getting used to, but he soon won me over with his interpretation of Bob's "aw shucks, ma'am" persona.

Could you see The 47th Samurai being made into a movie or a TV series? Who should the stars be?

Definitely. I'd have to continue Mark Wahlberg for Bob. Not familiar with the many a Japanese actors that would be needed.

Just suspend your sense of disbelief, and you'll enjoy this story. I suspect that a Hunter had a lot of fun with it.

I usually like the books in this series. This one was alright, but was harder for me to finish. Wasn't as believable as the other. I mean going to Japan, and learning to become a great Samurai... then to beat someone who train basically their whole life. I like fiction but the training seemed rushed for him to become a get Samurai. Just my opinion.

Story of a commitment to honor.

I read some the less favorable reviews regarding this book. While I understand why their ratings were low, I found this book parallels the Japanese code of honor and political/criminal underworld.
The samurai element was something I related to and enjoyed.
Excellent job Mr. Hunter and Schriner.

This was a good read. It started off a bit slow ; but, got going at a good clip about the half way point. The narrator was a bit on the Dry side and tended to make me sleepy. He more then anything is why I couldn't give it more stars.

I did not know this was a series book until I was listening to the author's note at the end of the book. I am glad I did not know because (with a few exceptions) I have tried to stay away from 'series' books. The reader on this book matched the main character very nicely throughout the story. The story developed quite slowly. Early on I was ready to put the book down and move on but thought I'd stay with it and see what happened. I am glad I did.

I cannot put my finger on any one point (still, it was w/n the first couple of hours) and say this is where the story started getting good or where exactly it pulled me in; however, it did. The story was organized and told well. It was exciting. The author had a nice mix of 'going back in time' and blending the back in time perspective into the story with the present. He did it well and it enhanced the story completely.

Overall, the book pulled me in slowly and completely and in the final portion I simply stopped what I was doing sat down and listened to the end of the book. I was glad that I did not follow my initial inclination to put this one down. It was well told and kept me hooked to the end.

Likely, I will look at this author's other books.

What was one of the most memorable moments of The 47th Samurai?

The raid to rescue the girl was very well done.

I got a tear at the very end.

I don't usually listen to action stories. If I had known this was one I wouldn't have gotten it. BUT, that said, I found I really enjoyed the book. I liked the information on kendo and I loved the ending.

Great work could not put down

great detail in well stated fashion, quality work enjoyed the suspense,action storyline and Narrator kept pace and interest will recomend to all

Well worth the listen especially if you're at all interested in Japanese culture and the Samurai (pronounced Sa-mu-rai and not Sam-u-rai). The narrator does a fine job but should've gotten a bit more coaching on Japanese pronunciation. If you speak Nihongo, the reading could be a bit annoying at times. Even at that, you won't be disappointed.

good story, but there is a lot of intense sexual content, if that is of concern to you, best to avoid; not one of Hunter's best books