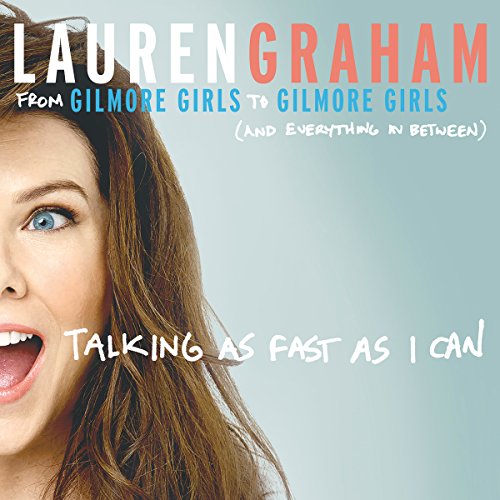 Winner of the GoodReads Choice Awards 2017 for Humour

In this collection of personal essays, the beloved star of Gilmore Girls and Parenthood reveals stories about life, love, and working as a woman in Hollywood along with behind-the-scenes dispatches from the set of the new Gilmore Girls, where she plays the fast-talking Lorelai Gilmore once again.

In Talking as Fast as I Can, Lauren Graham hits 'pause' for a moment and looks back on her life, sharing laugh-out-loud stories about growing up, starting out as an actress, and, years later, sitting in her trailer on the Parenthood set and asking herself, 'Did you, um, make it?' She opens up about the challenges of being single in Hollywood ('Strangers were worried about me; that's how long I was single!'), the time she was asked to audition her butt for a role, and her experience being a judge on Project Runway ('It's like I had a fashion-induced blackout').

Some more things you will learn about Lauren: she once tried to go vegan just to bond with Ellen DeGeneres; she's aware that meeting guys at awards shows has its pitfalls ('If you're meeting someone for the first time after three hours of hair, makeup, and styling, you've already set the bar too high'); and she's a card-carrying REI shopper ('My bungee cords now earn points!').

Including photos and excerpts from the diary Graham kept during the filming of the recent Gilmore Girls: A Year in the Life, this book is like a cosy night in, catching up with your best friend, laughing and swapping stories, and - of course - talking as fast as you can.

enjoyable, wish there was more, though. funny and relaxing. great companion as a background for whatever you are up to.

Hearing the book in Lauren Graham it self makes this just Perfect! it could´t get better than that! Talking as fast as she can just like Lorelei dit it!

Lauren Graham sure can talk fast

Easy to listen to. It was great listening to Lauren Graham if you love the Gilmore Girls.

Story wise, it's so-so. Just nice to be allowed into the "behind the scenes" through Graham's lens.

Btw, there's no photo 25. The blue coat will remain a mystery to listeners.

Such a great audiobook and the stories mean much more when narrated by the author herself. Listening to Lauren Graham talk about her experiences shooting all 7 seasons of Gilmore girls felt like I was part of the story. The parallels between her and Lorelai were evident from just her writing style. 10/10 would recommend!

Gilmore Girls must have

I'm literally only like 10 minutes in and already blown away by the wittiness and humor of the author. this book proves that Lauren is actually Lorelai! Unbelievably funny. Entertaining and charming. I love it