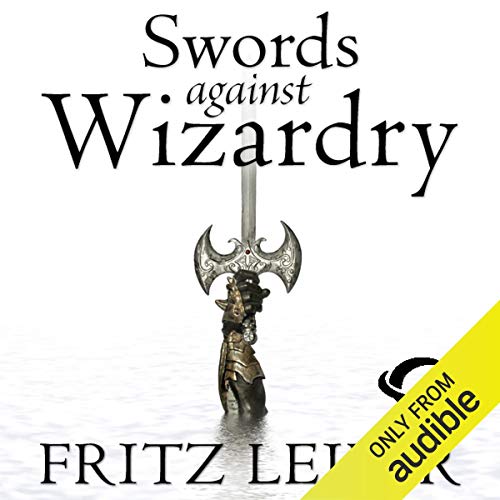 In Swords Against Wizardry, Fafhrd and the Gray Mouser, sent by a witch on a foolhardy journey, return to the icy reaches of the north in search of dubious treasure.

There, they are seduced by the glittering attractions of an ice woman, who brings them with her to her shadowy lair. The brothers-in-arms are overwhelmed by intimations of power and rise to become the overlords of Quarmall, a dangerous region of lies, magic, and swords.

The late Fritz Leiber's tales of Fafhrd and the Gray Mouser launched the sword-and-sorcery genre, and were the inspiration for the fantasy role-playing game Dungeons and Dragons.

'The time has come for sorcery and swords.'

I. 'In the Witch's Tent' (1968)
Favorite line: 'It appears that someone doesn't like us.'
This short prologue-story is funny and entertaining in situation (visiting a drugged out hag for a prophecy), climax (using a tent as a weapon), description ('Its glow showed her face to be as dark, jagged-featured, and dirty as the new-dug root-clump of a black apple tree'), and banter ('You'd turn a wizard's workroom into a brothel'). However, it's really only a fix-up bridge between the last story of the third book ('Adept's Gambit') and the second story of this one.

II. 'Stardock' (1965)
Favorite line: 'I'm beginning to think . . . they aren't sportsman.'
In this novella Fafhrd and the Gray Mouser have been challenged to climb Stardock, the tallest peak in the north, to win a pouch of stars and the right to father sons on the Snow King's daughters. The story is a funny and suspenseful mountaineering fantasy featuring an ice-cat, a flying-carpet manta, snow serpents, ice-gnomes, rival rogues, a race of invisible people, and a neat climax. Alternating between the comical (e.g., Fafhrd forgetting about the Mouser trapped in a chimney), the sublime (e.g. the vanishing of an entire snow ridge 'as if some great God had reached down while the Mouser's back was turned and removed that block of reality'), the physical (e.g., eating powdered or raw meat while climbing), the story finally asks what drives men to climb mountains.

III. 'The Two Best Thieves in Lankhmar' (1968)
Favorite line: 'Mouser? Your box is buzzing.'
This short story is a perfect length for its plot, freshly focuses on what comes after an adventure, and humorously humbles its heroes. Having spent too much time together before and after Stardock and quarreled over the best way to sell their invisible jewels, the friends part--until 'Night was a-slink' and the 'malfeasors' of Lankhmar are readying for business, and they run into each other by chance (?) outside the headquarters of their respective fences, Ogo the Blind and Nemia of the Dusk. When the Mouser proclaims that he and Fafhrd are the two best thieves in the city and Fafhrd crosses his fingers, one expects something to go amiss with their jewel selling. After all, adventuring is not conducive to thieving, and men are no match for women.

IV. 'The Lords of Quarmall' (1964)
Favorite line 1: 'He almost stuttered midway through the word 'slewerisophnak.''
Favorite line 2: 'But they assured me they were the very greatest sorcerers.'
This novella, the longest story in the book, is uneven, having been begun in 1936 by Leiber's friend Harry Otter Fischer and completed by Leiber decades later, but it is an entertainingly lurid romp that reads like a fusion of Akira Kurosawa's Yojimbo, Robert E. Howard's 'Red Nails,' and Jack Vance's Dying Earth. Unbeknownst to each other Fafhrd and the Mouser have hired themselves to the two feuding sons of the King of Quarmall. Quarmall is a 'huge ramified castle kingdom,' an unwholesome realm consisting of the King's above-ground castle, the older brother Hasjarl's subterranean Upper Levels, and the younger brother Gwaay's Lower Levels. Genetically modified pinheaded slaves with elephantine legs run treadmills to pump fresh air underground. Fafhrd's boss Hasjarl looks like a 'kobold birthed in a hot-spring,' pours invective from his sphincter-shaped mouth, tortures his slaves, and drives his bearded mages to bespell Gwaay with diseases. Gwaay, the Mouser's master, is 'a pallid, handsome, soft-spoken youth' who goads Hasjarl while acting calm and keeping his depilated sorcerers blocking the disease spells. The hating brothers are fire and ice foils for each other and for their hired champions. As we read the story wondering what will happen when Fafhrd and the Mouser finally run into each other, we encounter many fine scenes: e.g., Gwaay playing a telekinetic strategy game; the King looking down from his tower at villagers walking like 'ants struggling through some sticky trap'; Fafhrd reading the 'dry and prosy' history of Quarmall inscribed by an eon-old cockroach called Scraa; Hasjarl having his eyelid grommets inserted; Hasjarl and Gwaay playing a game of chess; the Mouser finally getting to read a dread spell; the principles participating in a splendid climax; etc.

As usual, Jonathan Davis gives a wonderful reading of the audiobook, doing an Aussie/Cockney Mouser and an American Fafhrd and relishing all of Leiber's outre events, characters, and style. I particularly enjoyed his High Eunuch, combustible Hasjarl, and Blind Ogo, his Eyes, and Nemia.

Fans of sword and sorcery who want to see one of its decadent, imaginative, and witty fathers at the height of his powers should read this book.

I can???t heap enough praise on the audio version!

"The time has come for sorcery and swords."

After a somewhat disappointing third volume in the Lankhmar series, Fritz Leiber is back to form in Swords Against Wizardry. This book contains four stories about Fafhrd the big red-headed barbarian, and The Gray Mouser, the small wily magician-thief. Three of the stories come from the pulp magazine Fantastic and the first story was created for this volume as an introduction. The stories fit so well together that they almost feel like a novel.

???In the Witch???s Tent??? is a very short introductory story in which Fafhrd and the Gray Mouser visit a witch who prophesies about the events to come in the next story.

In the novella ???Stardock??? (1965, Fantastic), our heroes and an ice-cat companion climb the forbidding mountain Stardock where they hope to find ???a pouch of stars.??? This story is slow in the beginning when the boys are climbing, but once they conquer Stardock, things get pretty exciting and, after leaving some incubating DNA behind, they leave the mountain with a bag of jewels that can only be seen at night. All of Fritz Leiber???s stories are gorgeously written, but ???Stardock??? has some of my favorite lines:

Fafhrd said dreamily, ???They say the gods once dwelt and had their smithies on Stardock and from thence, amid jetting fire and showering sparks, launched all the stars; hence her name. They say diamonds, rubies, smaragds ??? all great gems ??? are the tiny pilot models the gods made of the stars... and then threw carelessly away across the world when their great work was done.???

This is beautiful in the audio version read by Jonathan Davis.

???The Two Best Thieves in Lankhmar??? (1968, Fantastic) is a fun short story that takes place after the boys return to the city after their conquest of Stardock. Apparently they got sick of each other on the way home (that happens occasionally and is a clue to the type of story that comes next), so they split up the jewels and went their separate ways. Both are trying to sell their share of the jewels, which is a problem because these gems can only be seen at night. When the story begins, the reader assumes that ???The Two Best Thieves in Lankhmar??? refers to Fafhrd and the Gray Mouser, but we all learn soon enough that what the Mouser says is true: Deal with a woman ??? surest route to disaster.

???The Lords of Quarmall" (1964, Fantastic) is one of my favorite Leiber novellas. Having split up for a time, Fafhrd and the Gray Mouser have, unbeknownst to them, each been hired to be the champion of two horrible brothers who hate each other and who want their father???s throne. The brother who hired the Mouser lives in subterranean caves underneath the brother who hired Fafhrd. Even though we can guess how the story will end, this is a creative tale with a grand setting. Fritz Leiber???s fantastic imagination is on full display in this story, and it beautifully highlights the sweet relationship these two rogues have with each other.

I can???t heap enough praise on the audio version of the Lankhmar books. Jonathan Davis is one of the best voice performers and these are some of his best performances. If you listen to audiobooks, don???t miss this series.