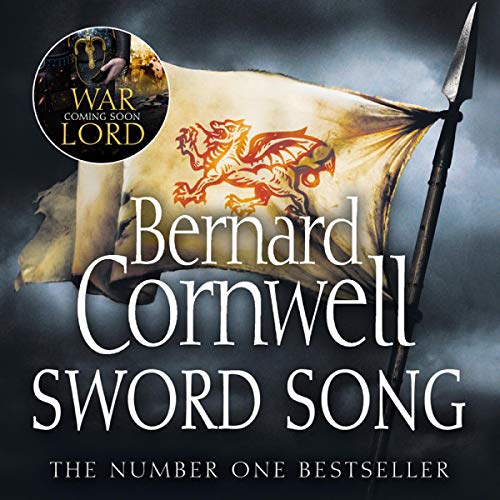 The fourth in the best-selling Alfred series from number-one historical novelist, Bernard Cornwell.

The year is 885, and England is at peace, divided between the Danish kingdom to the north and Alfred's kingdom of Wessex in the south.

But trouble stirs, a dead man has risen and new Vikings have arrived to occupy London. It is a dangerous time, and it falls to Uhtred, half Saxon, half Dane, a man feared and respected the length and breadth of Britain, to expel the Viking raiders and take control of London for Alfred.

A gripping tale of love, rivalry and violence, Sword Song tells the story of England's making.

Praise for The Lords of the North:

“Beautifully crafted story-telling, complete with splendid set-piece battles and relentless derring-do, so gripping that it rarely stops to catch a breath. It demonstrates once again Cornwell's enormous skill as a historical narrator. He would have graced Alfred's court entertaining the guests with his stories” (Daily Mail)
“Cornwell takes the spectres of ninth century history and puts flesh back on their bones. Here is Alfred's world restored - impeccably researched and illuminated with the colour and passion of a master storyteller” (Justin Pollard, author of Alfred the Great)

“Bernard Cornwell is a literary miracle. Year after year, hail, rain, snow, war and political upheavals fail to prevent him from producing the most entertaining and readable historical novels of his generation.” (Daily Mail)
“Cornwell's narration is quite masterly and supremely well-researched” (Observer)

Once more I have been transported thanks to a great writer and brilliant narrator. Sadly, I have listened to a brief snippet of the next book and find myself torn because of the change in narrator. Jonathan Keeble brings a book and its characters to life for me, I think that a new narrator will be lacking and I will not enjoy the immersion as I normally do. Whatever the reasoning I feel it is poorly done to switch narrator part way through a series.
I may continue at a later date but for now I will savour what has come before and take a break.

Jonathan Keeble’s performance was superb! His ability to create subtle differences in character with his voice is amazing. I was amazed at the difference in his voice between the older and younger Uhtred.

The first four novels in this series were simply OUTSTANDING thanks to Jonathan Keeble's stellar NARRATION. For reasons I'll never understand, Bernard Cornwall changed narrators for the 5th novel, and in so doing terminated the remainder of a 13 episode series (for me). I gave episode 5 a listen but failed to make it though the first hour as I so missed Johnathan Keeble's gift of such extraordinary passion..... I immediately started the 3 part WARLORD CHRONICLES (same author) narrated by no other than... JOHNATHAN KEEBLE👍👍👍

Keeble as narrator adds so much to the story

the story was good but Jonathan Keeble as narrator was great adding so much color to the story telling. I hope he knows how appreciated his efforts are. its amazing how much a great narrator can add to a good series.

I love the story and how it's told. Jonathan keeble is my favorite version of this.

Unfortunately this is the last of the Keeble books. Jonathan Keeble is THE voice of Uthred. No one comes close and what comes next (for 2 books only thank god) is dreadful. He makes Uthred sound like Uthred and gives every place it's proper name with the right pronounciation and gives every character their proper feel with his stellar voice work. I always dread having to go without him from this book on. The book itself is one of the inbetweeners that Cornwell makes us go through every since the great Trilogy. Book 1, 2 and 3 are stellar, Book 4 is probably one of the weakest. Book 5 is decent while not stellar, Book 6 is very good again, Book 7 is again a bit of a dud, Book 8 is pretty good because it has some really nice B story plots, Book 9 is again fairly strong. Book 10 is decent simply because we finally reach a sort of end and Book 11 again is dreadful. What holds this up is Keebles voice work. So treat yourself because you won't hear Uthred as convincing as this again for the next 7 books.

jonathan Keeble is the perfect Reader for that place of work!!! the Story as usual impacable.

fantastic storytelling and writing by Bernard Cornwell and Jonathan Keeble really brings all characters to life.