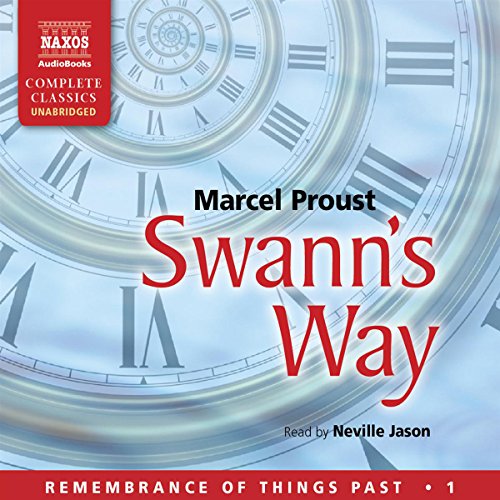 Remembrance of Things Past is one of the monuments of 20th-century literature. Neville Jason’s widely praised abridged version has rightly become an audiobook landmark, and now, upon numerous requests, he is recording the whole work unabridged which, when complete, will run for some 140 hours.

Swann’s Way is the first of seven volumes and sets the scene with the narrator’s memories being famously provoked by the taste of that little cake, the madeleine, accompanied by a cup of lime-flowered tea. It is an unmatched portrait of fin-de-siècle France.

While one probably should read (or in this case) listen to Proust's 'A la récherche du temps perdu' in French, this recording is really the next best thing. The reading by Neville Jason is absolutely impeccable with a right reading pace, and gives the typical long meandering sentences of Proust a highly poetic touch. One of the most beautiful passages in this book is without a doubt the famous novel-within-a-novel 'A love of Swann' where Jason finds the perfect tone to convey the melancholy and also the tongue-in-cheek humour (which in this English translation reminds me even a little bit of Charles Dickens). The abridged recording version of this work was already rightfully lauded and If one takes in account that Jason recorded the complete cycle of 7 novels one can only but admire this towering achievement. The accompanying booklet gives also an interesting insight in the background of this literary masterpiece. In one word: Bravo!

Not a book one reads but inhabits & floats through

For years, I have put off reading Proust mainly because the size of In Search of Lost Time/Remembrance of Things Past seemed intimidating. Now, having finished Swann's Way: Vol 1, I feel a compelling need to keep going.

This novel is preoccupied with all the details that surround time, desire, love, memory, happiness, life, truth, names and relationships. It is vivid, detailed and reminds the reader to look, feel, grab, smell, think, confess, and take big risks to grow that one perfect, mystic blossom of love.

Proust's prose is beautiful, his imagery is brilliant and he seems to swing for the fence on every page. This is not a book one reads, but one inhabits and floats through. But first one must find and dip your own Madeleine.

Absolutely captivating and stunning. The narration is outstanding - a delight to listen to and extremely well modulated. Do not allow pre-conceived notions regrading Proust hinder your taking this most worthy journey...cannot wait to continue the series.

Writing and narration at its best

My encounter with Proust's great work commenced ten years or so ago, when I purchased a six-volume version in hardcopy. An acquaintance and I would commiserate with each other, from time to time, on our lack of progress; intimidated no doubt by Proust's reputation for long sentences.

Then at a sale I bought two volumes of a 12-volume (abridged) Naxos audiobook on CD. I fell in love with the audiobook and Neville Jason's narration. I was surprised to find that Proust is such a good writer that it was a good listening experience even with most of the book missing.

The next step I took was to subscribe to the audiobook online where I had to download the next section every ten minutes or so. I had access to the full abridged work and it was cheap. But it was very tedious.

An introductory offer ito Audible.com is allowing me to get the full unabridged version at a price I can afford and in a convenient MP3 format. Swann's Way is surely one of the great audiobooks; and that's just the first volume of seven.

A wonderfully written book that describes a life so close to mine in spirit, it's hard to decide between being elated or horrified.
Truly captures the physical and mental mesh that we call existence.
Definitely getting the next book in the series.

All things are lost to time.
I implore you to love each step.
Enjoy!
:D

What did you love best about Swann's Way?

The narrator understands what he is saying and superbly navigates his way through Proust's endless sentences.

What was one of the most memorable moments of Swann's Way?

The dipping of the cake into the tea, of course. That is the "most memorable" because everybody who has head about the book knows about that scene already -- and almost nothing else about the 2,500,000 words in "In Search of Lost Time."

All are superb and not to be forgotten.

Would you listen to Swann's Way again? Why?

Yes - this is a story that is both easy to listen too and densely rich with detail. I read the entire Search of Lost Time over ten years ago and of course have forgotten much of it, so this audio version has been a great way to get reacquainted - and to discover meaning and significance that I overlooked the first time.

I know that each additional listen will reveal yet more meaning and connections between characters, places and events.

Neville Jason has perfect pace and delivery. And most importantly for a book of this size and complexity, he has the talent and vocal dexterity to give each character a unique and engaging voice.

The text is the earlier translation, so can seem a little precious at times, but Neville Jason's delivery is so good that it stays fresh and alive.

“Remembrance of Things Past” is referred to in Haruki Murakami’s recent book, “1Q84”, as a book that is rarely read because of its interminable length. It is chosen by Murakami’s bodyguard-character as reading material for “1Q84”’s female hero while she is hiding in a safe-house. One wonders why Murakami chooses “Remembrance of Things Past”. The answer is clear in “Swann’s Way”. “Swann’s Way” exemplifies the quality of classic books; i.e. readership longevity and life’s universality.

By telling a story, Proust is showing why and how people should be accepted for who they are; not whom one thinks they should be. Swann begins to see Odette as an independent human being; albeit a toxic companion for his life, but one that, if loved, should be loved for who she is, not what Swann thinks or wants her to be.

This interpretive insight, whether right or wrong, is an example of why Proust’s “Remembrance of Things Past” is a classic. A classic resonates in some way with whoever reads it, based on their human inheritance and life experience. Even if this critic’s insight is wrong, Proust writes beautifully, with detail and intelligence that are classic values in themselves.

Excellent reading of V1 of "In Search of Lost Time

This is volume 1 in a 7 volume series comprising the entire novel "In Search of Lost Time". This volume describes the young narrator's childhood and introduces the artist's theories on sense memory in the famous Madeleine episode; it also includes the novella "Swann in Love" that introduces two major characters who become trapped in a dead-end love affair. Descriptions of childhood visits to Combray are especially enjoyable and evocative of a time past. Proust was a keen social observer and could really read people, so his descriptions bring characters to life.

Neville Jason's reading is a pleasure to listen to. He's a great voice actor, which makes it easier to identify the characters. it was quite an undertaking to read at 1.25 million words for all 7 volumes. (If all 7 volumes are not available when you read this, please put in a request for the missing volumes to Audible.)

Today, Moncrieff's title "Remembrance of Things Past" has been updated to "In Search of Lost Time", a better translation of the original French. Moncrieff's translation of what is perhaps the greatest twentieth-century novel was a work of art in itself, but the translation included some errors and is out of date. I recommend obtaining William C. Carters translation of this volume in paperback from Yale to read or browse when it becomes available, but this is still a great recording.

Great narration for the male parts

One of the greatest books and on the whole well read. Horrible narration of all female parts though. Why does he make all women in this book sound like imbeciles? It is still worth getting despite this annoying issue.

I set out on this thinking, "Great - another classic to get under the belt" but while I made my way all the way through this volume I gave in halfway through the next. "Rememberance..." is clearly not for me. I listened fo 7+ hours to the story of a mans life and realised that at the end of it I could not care less what happened to him. I just found myself thinking that Twain or Hemmingway would have given me just as much information and just as much pleasure in about half a page and 5 minutes of narration. And yes - I know that makes me a philistine but I don't care.

The narration is very clear and a pleasure to listen to but the text is just too windy for my tastes.