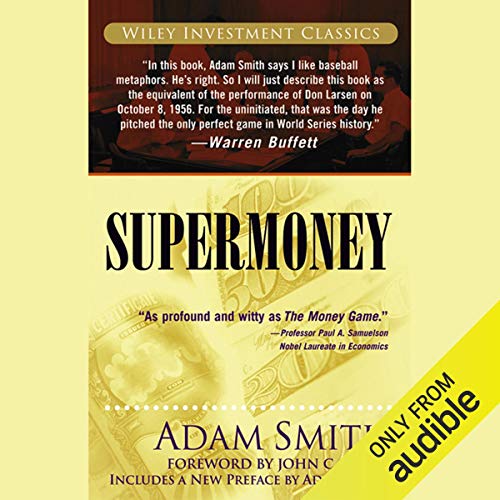 Supermoney may be even more relevant today than when it was first published nearly 25 years ago. Written in the bright and funny style that became Adam Smith's trademark, this book gives a view inside institutions, professionals, and the nature of markets that has rarely been shown before or since.

"Adam Smith" was the first to introduce an obscure fund manager in Omaha, Nebraska, named Warren Buffett. In this new edition, Smith provides a fresh perspective in an updated Preface that contextualizes the applicability of the markets of the 1960s and 1970s to today's markets. Things change, but sometimes the more they change, the more they stay the same.

This audio book is NOT Complete.
It's a 300 pages book and the audio book only reads about 50 pages(chapter 4).

Audible should give me my money back

This was the biggest rip-off I've ever seen from Audible, ever. This was listed as "unabridged"...covers a tiny bit of one topic then a small snippet of another then it is done. Seriously, Audible should just pull this from the library or at least charge maybe $5 for it.........TOTAL ripoff.

... through behavioral economics, before it had the name: I had lately read the first book in this series, 'The Money Game,' in print, and enjoyed it. This picks up in the same continuous tongue-in-cheek, footloose tone, into the early 70s. It is like 'The Go-Go Years' also found here in audio, but sketched in quicker little portraits of knaves and fools all across the investment world (but no less wise and instructive for that). Plenty is pertinent and even prescient for repeated trips through herd stupidity seen in markets since then. (The Swiss bankers vignette could fit today's news. And the musings on the Swiss are worth the price of admission). The narrator has just the right laconic tone, but he is awful at pronouncing any word not simply and obviously domestic-American-English. He is at a pre-college level, making a hash of anyone's name (a widely literate personal would know) and any city or street name (a cultured-literate person would know). It is seriously distracting listening to him make a hash of, e.g., "subsidiary," "Basel," "strasse," "Cuernavaca," "antennae" .... Yup, that's right. Fortunately I can wince and enjoy the book. The way investors (retail or for their own account) as well as various partners and other bigger financial wigs are suckered, hoisted on their own petards, is completely familiar, and can be amusing from a safe distance. This coincides with odd snips from here or there such as the appearance of a certain sort of pre-Jobs figure: an "acid-head arbitrageur" (yes, mispronounced) worthy of a Peter Sellers character sketch. Many a character of various stripes stumbles into the miasma of the 70s, like straight-faced insects into a complicated trap, and I was old enough by then (and stumbling enough) to enjoy this now. Here, entertainment meets cynical world-wisdom. Yes, the tech booms were flaring up back then, tech stars, hot names and the mystique of hot investments going through the same tilt-a-whirl. The pitches to investors are mighty familiar. And yes, some things may be tedious -- but even the standard hoary recitation of the transition from paper to computers in 1970s brokerages (not funny to many partners and players who were caught sideways and dragged under, along with some retail investors) is peppered with laugh-out-loud portrayals of various players.
The 'Supermoney' concept itself is a fairly shallow notion plastered on the front of the book. 'Supermoney' is roughly capitalized future earnings, as in, stock, which multiplies the canny entrepreneur's (otherwise relatively plodding ordinary cash) money. It can be lost as easily as any other asset class discussed here. But that's alright.

Where does Supermoney rank among all the audiobooks you’ve listened to so far?

This is a pretty solid book if you want a glimpse into the bull market of the 50's-60's. It really shines especially if you look at the excesses during the time and compare it to the dot com bubble. This BOOK is up there for me. probably top 30th percentile for books I have gotten the content from. The narration makes it almost unbearable.

Who would you have cast as narrator instead of Adam Zink?

Sounds like a high school senior is reading the book. In addition, the editing is worse than amateur- a lot of sentences have clear demarcations where an edit was inserted at a different volume!

This book is read by a narrator that is reading the book for a first time. Slow, choppy, hard to follow.

The story may be ok, but it sure sounds like the fine print my bank has written on back of their statement!!

The recording quality is bad too. Keeps getting louder and lower. Impossible to follow.

Audible should take this book OFF its libarary for good. Or get some else to record it.

Would you listen to Supermoney again? Why?

Supermoney covers the late 1960's and early 1970's boom and bust period. Discusses how the market functioned and then how it became dysfunctional and even fooled the pros. Discusses Buffet and Graham. Proposes that the small investor can make good returns through patiences not hyper-trading.

This audiobook was originally damaged and that is why it received bad early reviews. Its been fixed.

Covers Warren Buffett's early years and the development of his investing strategy.