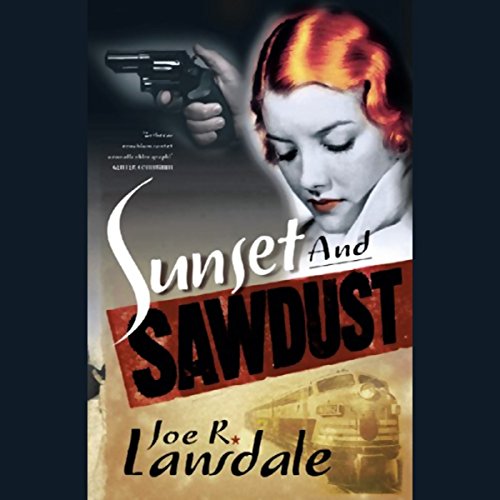 He has been called “hilarious...refreshing...a terrifically gifted storyteller with a sharp country-boy wit” (Washington Post Book World), and praised for his “folklorist’s eye for telling detail and [his] front-porch raconteur’s sense of pace” (New York Times Book Review).

Now, Joe R. Landsdale gives us a fast-moving, electrifying new novel: a murder mystery set in a steamy backwater of Depression-era East Texas. It begins with an explosion: Sunset Jones kills her husband with a bullet to the brain. Never mind that he was raping her. Pete Jones was constable of the small sawmill town of Camp Rapture (“Camp Rupture” to the local blacks), where no woman, least of all Pete's, refuses her husband what he wants.

So most everyone is surprised and angry when, thanks to the unexpected understanding of her mother-in-law - three-quarter owner of the mill - Sunset is named the new constable. And they're even more surprised when she dares to take the job seriously: beginning an investigation into the murder of a woman and an unborn baby whose oil-drenched bodies are discovered buried on land belonging to the only black landowner in town. Yet no one is more surprised than Sunset herself when the murders lead her - through a labyrinth of greed, corruption, and unspeakable malice - not only to the shocking conclusion of the case, but to a well of inner strength she never knew she had.

Landsdale brings the thick backwoods and swamps of East Texas vividly to life, and he paints a powerfully evocative picture of a time when Jim Crow and the Klan ruled virtually unopposed, when the oil boom was rolling into and over Texas, when any woman who didn't know her place was considered a threat and a target. In Sunset, he gives us a woman who defies all expectations, wrestling a different place for herself with spirit and spit, cunning and courage. And in Sunset and Sawdust he gives us a wildly energetic novel - galvanizing from first to last.

"The book opens with a cyclone, ends with a plague of grasshoppers and in between there's insanity, extreme violence, sex, grotesques aplenty and an excellent dog. What's not to like?" (Publishers Weekly)

If I could give this book 6 stars I would. It's an amazing story - some of it a bit "fantasy" but overall a very good tale. And the narrator was incredibly good. I've been with Audible for a year and this is the best one I've read yet.

As with all of Joe's books that I've read, this was a top-notch story told with a "from the hip" style that draws you in and keeps you on your toes with twists that sneak up on you - there are clues and you may even figure out the gist of it but there's almost always some little something you've overlooked - some thread that helps tie it all together that much tighter that you overlooked even though the clue was sitting there to be seen.

And Joe is great at transporting the reader to a different time and place. It's not always a comfortable time or place and it's not always prett but it's always a fun ride that you're not quite ready to leave when it's run its course.

Joe R. Landsdale seems to specialize in stories that depict Texas as a Hell on earth. While he is a wonderful storyteller and has wonderful characters his novels are set in poverty, dreariness, violent, prejudice, and the desolation of a flat heat baked sqaulid land. It's nice to have a mystery that not about the rich and famous set in beautiful places Joe swings the pendulum all the way to the other side. It's important to be exposed to the side of America we don't like to see but it is a bitter pill to swallow.

If you can get past that, this is a great story. His use of language will prove offensive to most be it is honest down to its most raw. The mystery keeps you guessing, character's surprise, the bad guys are original, and the ending is an oll out orgasm.

Not Hap and Leonard

I'm just beginning to discover Mr. Lansdale's novels. I enjoyed the Hap-and-Leonard novels, because of their humor. "Sunset and Sawdust" emerges from a different wellspring of Mr. Lansdale's imagination -- a more serious and sober wellspring -- which doesn't provide the laughs that Hap and Leonard elicit. "Sunset and Sawdust" takes place during the Great Depression, among people enduring hard times. The story kept me wondering, "Could this have really happened, even during the Depression?" Having not lived through the Depression, and not having studied about it much, I don't know; but some of the events in "Sunset and Sawdust" strained my credibility a bit. I don't mind when a funny story strains my credibility; but when a serious story does so, it troubles me. On the other hand, the reader, Deborah Marlow, does a wonderful job narrating this audiobook ... to the extent that, in my opinion, she rescues it. She has a beautiful voice which she can command into a wide variety of characters. I would recommend this audiobook to anyone who has an interest in the Great Depression, feminism, or east Texas hardscrabble folk.

Overall its an entertaining book. It had very interesting characters and a good story. It occasionally got bogged down because the reader was a little sub par.

Elements of "Sunset and Sawdust" reminded me of the stories my parents and grandparents told of the depression in rural areas in Texas. This book evokes that period better than any historical rendition. But the cultural and social details are just the foundation of a solid mystery, with characters as finely drawn as hairs on a frog's chin. This book may not appeal to everyone, it can be as slowpaced as an August day on the Brazos, but if you want to be placed in a different time and, probably, in a different part of the country, I cannot think of a better book.

I'm not sure why two of Lansdale's novels (non-Happ and Leonard) rated such poor narrators.

This is the first in a two part series about "Camp Rapture", a town / settlement in East Texas. There is no need to take them in order as they are virtually unrelated.

I'm not much of a fan of female narrators because there are so few good ones, so there may be a bias here, but listen to a sample first to make sure you can stand her droning slow and irritating voice.

Overall, I recommend the story, just be cautious with the narrator.

I think when the author realized what a pretty story he'd made, he couldn't keep his hands off it. He kept adding weird features and just sucked the life right out of it.

A great story set in the early 1900s in the time of Jim Crow in the south. The belief at that time is a woman is a man’s property. He can do whatever he wants to her, including rape. Within the first 20 minutes of the book, we see what option Sunset feels she has.

At this time society feels Blacks do not have any rights other than what a white man cares to acknowledge and a man can take a girl’s virginity.
We see the selfish and greed that are accepted. Those that have some resources are not above cheating others even when it means a child will not be able to eat.

Sunset has a personal dilemma. Her husband was worshipped by, Karen, her daughter and her mother-in-law. Her killing sets the southern white male to face the misconceptions white males’ superiority to women and blacks and the greed of man. Much of the time, men think sex is the method of controlling women. They do it by sweet talking, paying for sex or rapping them.

Joe R. Lansdale accurately portrays the racial and sexual attitudes of society. He illustrates the viciousness of drama using the rain and locus as back drops. The rain washes away traditional place in man’s superior place in the law and employer of the town. Now a woman, holds the power of a man’s ability to provide for his family and the financial incentive to force a female law representative. Using three generation of women, Joe, shows the evolution of how Sunset’s killing her husband effects decisions of the past, present and future role of women in the family.

Joe uses the symbolism of large black men to represent the good and evil that society forces upon them. One man must endure the stigma of being a bi-racial educated man and another is a threat simply because he is big and black. With locus cleaning away all life, in the end there is still death for black men in a white man’s fight for riches.

This was very emotional for me to read. As a black woman, the issues “place of women and blacks” are still prevalent, we have just covered them over.
It is 2017, much of the racial bigotry is still happening and being sanction at the highest levels of the country, Trump. To keep, niggers in their place the KKK was the go to force in this story. Through Trump’s “both sides” comment, he gave KKK the justification to exist today.

I applaud Joe for writing such an original story on the racial inequities and sexual abuse of women. At one point it got slow but stick with the story.