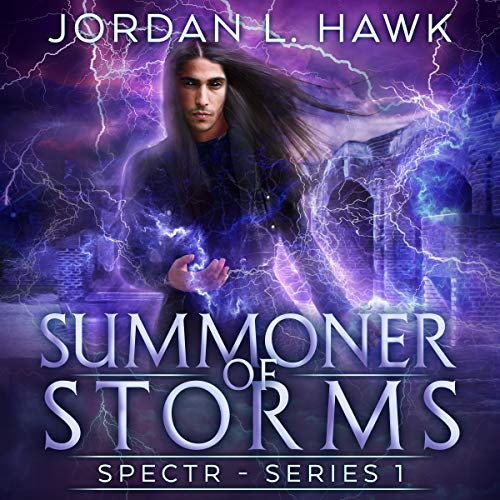 Federal exorcist John Starkweather's life is in tatters. His best friend, Sean, betrayed him. SPECTR, the agency he viewed more as a surrogate family than an employer, wants him dead. His only allies are members of the mysterious organization called the Vigilant, whose motives remain in question.

The only thing keeping John together is the presence of his lovers: Caleb Jansen, a powerful telekinetic, and Gray, the vampire spirit possessing Caleb.

Together they must not only evade capture but somehow stop SPECTR from building an army of demon-possessed soldiers. If they are to succeed, John must question everything he's ever believed about SPECTR and spirits. And Caleb and Gray must decide how far they're willing to go--not just for John's love but for his very life.

The final battle is fast approaching and the gang is gearing up and preparing for it. Enlisting everyone they think can help. When they learned what Forsythe has planned for all the NHE’s he’s collected they are all horrified and scramble to stop him any way possible – before it’s too late.

That final battle was epic and brutal, and fit all the build-up from the previous books. We saw Gray truly manifest and everyone realising what that truly meant, what immense power he held. If people were scared of him before, that’s nothing compared to now. Much of the book did deal with the battle and the preparations for it, the gathering of information, people and supplies. But that wasn’t the only thing that was going on. A lot happened on the personal sides of our guys as well.

Understandably, with everything that has happened in the past few books John is having a hard time. Coming to terms with the betrayals of not only his best friend but also the organisation he’d dedicated his life to. He does know one thing for sure; he loves Caleb and Gray fiercely and will do anything to protect them.

Caleb and Gray are also moving forward. I love how they’ve really come to terms with their situation, how deeply they’ve bonded. I can’t imagine their situation is easy in any way shape or form, but it works for them. I also love how they treat their relationship with John, starting to talk things through. And more importantly, not deciding what’s best for the other, but respects them enough to ask. They’ve all come a long way in the past couple of months, and while they still have ways to go they stand on solid ground.

I think Brad Langer is synonymous to this series and these characters. From the start you can feel how he engages with the characters and the plot, he feels it and makes the listener feel it too. It all comes alive with his performance. Not to mention he adds so much to the feel of it. He makes you feel the tension, the fear and creepiness of certain moments and more than anything adds to that sense of place. Feeling the mist and fog, the claws or teeth digging into flesh… It’s brilliant!

I only have one small complaint; during a lot of the intense moments the POV switches were abrupt and without warning or some kind of signal. That usually work when you read a book, but when you listen to it, you usually need some kind of cue that we’ve changed location or POV – a longer pause between the sections, anything. There were several times where the POV changed and the narration continued on in the same pacing. It was confusing and threw me out of the story at some inopportune moments. But you know what, if that’s my only complaint – I’m darn happy.

Summoner of Storms marks the ending of this first SPECTR series, but not the end of Caleb, Gray and John. It will be interesting to know what they will do next. I do believe they won’t keep out of trouble for long though…

i love Spectr, and in the other audiobooks, Brad did a fantastic job. in this one, however, he kept messing with Gray's voice. I know that tends to happen, but i hope once SPECTR Season 2 starts, that Gray is back.

Incredible!! This should be a tv action drama! so cool! (I'll try to leave a more detailed review later)

This is a fabulous series. It is a perfect mix of suspense, action, romance and intrigue with intelligent main characters that don’t wait until it is too late to communicate their wants and needs.
Really enjoyable.

Best one so far!

Summoner of Storms by Jordan L Hawk and narrated by Brad Langer is book six in the series. I liked how everything seemed to come together in this book and tied up loose ends. Plenty of action and excitement! Best book of series but need to read series in order!
Narration stayed consistent throughout this series!

What a rush! Fantastic end to a great 1st series!

I can't believe it took me so long to listen to this series. It's a fantastic twist to the supernatural/m-m romance genre. The narrator was excellent portraying the various emotions and cadences, My only slight problem was I couldn't clearly hear enough of a difference between the sound of Caleb's and John's voices I absolutely loved the voice he gave to Grey, though, and how he slowed his speech pattern for this character...perfect!
Can't wait for the next series!