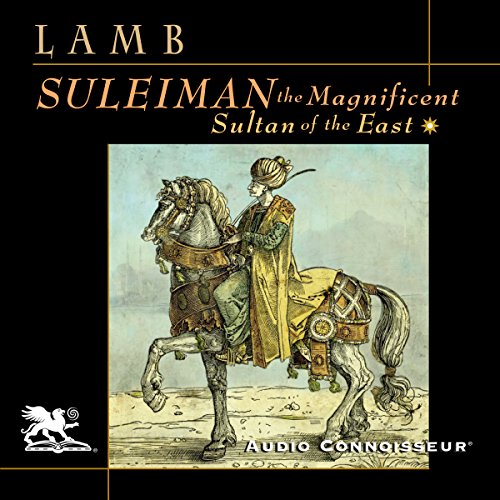 Suleiman the Magnificent: Sultan of the East

Suleiman the Magnificent: Sultan of the East

Suleiman the Magnificent is the story of the Ottoman Turks' greatest leader. He came to power at the early age of 25 in 1520. Before his death in 1566, he had altered the power structure and geography of Eastern Europe, and Turkey had become the dominant naval power in the Mediterranean. Suleiman's reign would mark the high tide of Turkish power in Asia Minor and Europe. His widespread conquests began with the taking of Belgrade and the surrender of Rhodes then surged on to Budapest, Tabriz, Baghdad, Aden, and Algiers, making the Turks' power feared and respected as far west as Paris and London.

This is a stirring drama of conquest and naked power. It is also the personal story of the sultan and his household and the less spectacular - but in some ways more deadly - play and counterplay of ambition and jealousy in the palace...particularly in the harem. It is a time of great adventure and great romance.

great for history buffs, not for casual readers. based off of Suleiman's personal laconic diary, court records and historians notes, Harold lamb weaves a detailed record of events from Suleimans coronation to the domination of the Mediterranean to his turbulent family life. beautiful, I recommend it.

Much of the history most Americans learn is filtered through the lens of western civilization. This is a look at the family responsible for the founding of the Ottoman Empire. The history is focused mostly on the life of Suleiman and his interactions and not at all an integrated history. Nevertheless I enjoyed the non-western perspective of the Ottomans.

I just re-listened to this book after stumbling upon the Turkish TV series about Suleiman.
It was well worth the re-listen.

The narration is clear, but a bit slow and mono-tonal.

I also really liked another non-western history Genghis Khan and the Making of the Modern World.

A Great look into Suleiman The Magnificent & the Ottoman Empire

I liked the detailed information regarding the Sultan’s diary. However, I felt like there are some discrepancies from what I’ve researched over my years in studying Suleiman & The Ottomans. His wife, Hurrem- Roxelana- had another son before selim II. HE died around age 20 in Manisa- after Şehzade Mustafa had already ruled that Sanjak (province). mustafa’s mother OUTLIVED everyone... proven by the payments that Selim II gave to her after he became Sultan. While she was called Gülbahar- she was known as Mahidevren. The details of the campaigns were very important & intriguing. I do think the Battle Of Mojacs could have been shown as one of the quickest & most decisive victories in this story. Instead, it seems like the author was set on proving Suleiman as a man who wasn’t a warrior. 13 campaigns ... equivalent to about 10 yrs in the saddle of his 46 yr reign says A LOT about how strong he truly was! I believe he was a man of contradictions... strong yet loving. Could overlook some things but read too much into one’s actions or inactions. He was ahead of his time in the belief of variety making an empire /country great. Shown through his lesson to Rustem Pasha - A gardening table filled with flowers of all types & colors. Then, when the varied types-colors taken away & only ONE color of flowers remained he asked Rustem which was better ? I’ve travelled to Istanbul & seen the magnificent Sulleymane Mosque, courtyard & Turbe (mausoleums Of Suleiman & Hurrem). I’m a Christian & from America but have been captivated by the city on the Bosphorus.... it’s also a place of contradictions-just like Suleiman. East meets west. New & old. Suleiman’s mosque is breathtaking! I must say it’s more so than the Blue mosque built ~50 yrs later. However, nothing can compare to the Hagia Sophia (Aya Sofia- Church Of Divine Wisdom- Not translated as Saint Sophia) I think a reading of one of Suleiman’s surviving love poems would’ve added to the weight of his love for her. “Throne of my lonely niche... It’s why he couldn’t see her scheming. Although, I don’t blame her for planning & trying to protect her sons Bc the Ottoman law of fratricide was expected at that time. The idea that it would prevent civil wars / throne fighting holds some weight of you compare what happened in other kingdoms (case in point... the war of the roses in England before the House of Tudor was established that lasted many years and thousands upon thousands died). I think Suleiman feared becoming his father or letting his anger take over. Every monarch or high leader has this type of battle within himself. It’s the age old story of the lonely king. Suleiman’s wisdom for understanding the Empire’s strategic reach has been understated. Theoretically-Nay- factually- the army couldn’t travel much further than it did -unless a permanent “second capital” was built for wintering the troops. However this would’ve caused a split & divide within the empire. Constantinople-Istanbul-the Payitat (capital city) would be without it’s sultan. The idea of using slaves to produce princes /Şehzade’s for the empire was a good idea on paper. One concubine mother to one prince was the rule until Hurrem had more than one son. This changed EVERYTHING. Instead of a mother being fully invested in one son’s ascent to the thrown her love would be divided. I do fully respect the details of this book & the author for his research. I do want to say that Sinan- the architect was NOT Rustems brother - it was another Sinan- of the era who had some role on the seas. I think the difficulty in tracing roots lies in the idea of no surnames during that era & the difficulty in accurately translating the written ottoman language. I could write forever about this topic. Overall I want to say that Suleiman was a strong leader & his (and the strong Sultans before him namely Mehmed the conquerer) choices- laws - and victories took many many years to come undone.

The material was presented as a spellbinding story with an outstanding performance of the narration. Fantastic work!