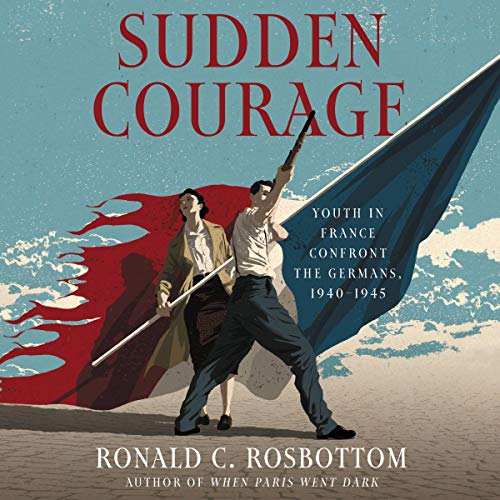 The author of the acclaimed When Paris Went Dark, longlisted for the National Book Award, returns to World War II once again to tell the incredible story of the youngest members of the French Resistance - many only teenagers - who waged a hidden war against the Nazi occupiers and their collaborators in Paris and across France.

On June 14, 1940, German tanks rolled into Paris. Eight days later, France accepted a humiliating defeat and foreign occupation. Most citizens adapted and many even allied themselves with the new fascist leadership. Yet others refused to capitulate; in answer to the ruthless violence, shortages, and curfews imposed by the Nazis, a resistance arose. Among this shadow army were Jews, immigrants, communists, workers, writers, police officers, shop owners, including many young people in their teens and 20s.

Ronald Rosbottom tells the riveting story of how those brave and untested youth went from learning about literature to learning the art of sabotage, from figuring out how to solve an equation to how to stealthily avoid patrols, from passing notes to stealing secrets - and even learning how to kill. The standard challenges of adolescence were amplified and distorted.

Sudden Courage brilliantly evokes this dark and uncertain period, from the beginning of the occupation until the last German left French soil. A chronicle of youthful sacrifice and courage in the face of evil, it is a story that holds relevance for our own time, when democratic nations are once again under threat from rising nativism and authoritarianism. Beyond that, it is a riveting investigation about what it means for a young person to come of age under unpredictable and violent circumstances.

Coming of age in a time of terror

This book is a follow on to Prof. Rosbottom's previous work When Paris Went Dark, about that city under German occupation during World War 2. During the course of his research for that earlier book the author uncovered numerous stories about resistance and was especially struck by the very young ages of so many people who struggled against both the German occupiers and their Vichy puppets. Many were adolescents and some were as young as 10. So he decided to tell their stories.

The book takes a thematic approach. One major theme is the difficulty of coming of age and establishing your own personal identity during a period of enormous stress. In peace time young people worry about school, friends, social life and their future. In a period of military occupation such as described in this book they worried about survival and their personal dignity. Watching friends being hauled away by the police for no crime other than their identity, the daily struggle for food, avoiding mass roundups, stresses like these forced people to grow up quickly. And then there is the question of how to react. Do you just go along and make the best of things or do you resist? For the young people in this book the choice was resistance. They were horrified at how quickly their elders succumbed to the Germans and chose to do something about it.

And this resistance took many forms. A great deal was non-violent. Defacing propaganda posters, hooting at propaganda newsreels and disobeying the rules were among the ways these people acted against the imposed authority. I was fascinated by the way these people managed to organize, often using pre-existing networks of friends as the nucleus for larger resistance groups. I used to wonder how large-scale resistance could get started under these circumstances. The author explains how this happened in France.

The role of Communists in the French resistance is fairly well known and given ample coverage here. However I was particularly struck by the Jewish resistance networks that sprang up. These were instrumental in preventing Jews from falling into Vichy and German hands. Jewish boy scouts, flitting around on their bicycles, an essential tool of resistance, saved thousands with the help of brave non-Jews.

Of course, the resistance often took violent form, especially as the war progressed. This would then result in horrifying reprisals, with people guilty of only minor infractions being shot. The importance of never falling into government hands, even for a trivial offense, was made plain.

The chapter on gender was particularly interesting. We largely think of the French resistance as a masculine affair and this is how it was portrayed in France for decades after the war. Only recently has the role of girls and women been given their due. In traditional French society girls and women were supposed to focus on home and family and that's the role Vichy expected as well. Paradoxically this allowed female resisters to be relatively invisible as for a long time the authorities didn't take this threat seriously.

I could go on but read the book. Prof. Rosbottom allows his subjects to tell their own stories rather than telling it for them. This means the book doesn't flow like a traditional narrative history but rather is a collection of personal tales grouped thematically. As such it is highly readable.

If I have one quibble it is that I would have liked to learn more about the young people who went in the opposite direction. Who chose to join the Vichy youth groups and especially the brutal para-military Milice. What motivated them? I realize this was outside the scope of this work but I'm curious nonetheless. Perhaps this is a topic for another book.

Rather than write a completely new review I chose to copy my Amazon review here. My only addition is that the narrator, whose work I was previously unfamiliar with, did a fine job here.

as a parent of 2 , and having several times visited and toured France while focusing on the 2nd World War occupation I cant get enough of the stories that would engage our own realities and awaken our individual need to resist oppression and horror. I will be telling everyone i know, and using the examples as fodder...